Distant sheep are moving down a green hillside like a spill of cream. The light between the shifting clouds travels over the patchwork quilt in counterpoint to the sheep. A few minutes ago an aged Irishman, his face wrinkled and furrowed by worry or the wind, stood beside me and told me that once, many years ago, he saw a fine lady artist right here. Then, with his crook he pointed to and named in Gaelic all the points of interest that he knew. 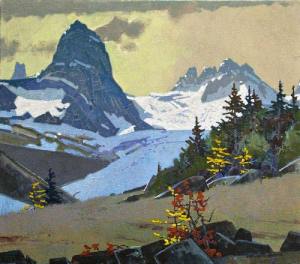 I’ve had these feelings before — a sort of déjà vu. The first time was in an alpine meadow in the Rocky Mountains. That’s why I call it an “alpine meadow.” It’s something to do with the perfection of the moment, not necessarily to do with “alps” or “meadows.” We all have them. We’re not just talking countryside here. I’m sure they can happen in supermarkets. It’s about the rightness, the sort of organization or design of it all. I often think if an artist has ten good ones in a lifetime — that might be enough. They can be bonanzas of reference. The important thing is to recognize them and do what’s necessary when they come along.

Take the time to burn them in. The retina can take down a lot of information and hold it there. The heart can hold a lot of feelings. Start with forms and silhouettes and then move to the details. Take your feelings and run them by your Poet. This sort of life’s too precious for standard evaporation. Use the camera tool. Kept images are the life-blood of visual artists and a branch of our professionalism that requires skill and technique. Pull your brush around them. In the studio of your mind take them to another level. Abstraction. Simplicity. Complexity. Another thing — make them yours.

PS “There is a curiously sharp sense of joy — or perhaps better expressed, a sense of mild ecstasy — that comes when you find the particular form required by your creation.” (Rollo May)

Esoterica: While the act of art can be Zen-like as we lose ourselves in the work, it’s also important to be alert to possibilities and opportunities. A useful technique is to train yourself to be “trigger happy” by reserving a part of your brain to act in the same way as a sports photographer might anticipate the height of the action.

The following are selected responses to this and other letters. Thank you for writing.

Early morning, entering New York harbor on the Queen E II. Fabulous skyline, Statue of Liberty on the left, the hum of the awakening city, buildings catching light here and there, seen, in variations, as early immigrants from my country had seen and felt before, hope, optimism, the end of the rainbow, the skyline as symbol, monument to wealth, prosperity, new beginnings.

Connected to the now
by Krystal McKerracher Small

These déjà vu moments happen when we feel completely connected to the “now.” They can happen anywhere. It’s in these moments that one feels most alive… that we feel connected to a continuum that is bigger than ourselves. Bigger and still, we are a part of it. I think this is the goal of the artist. To paint this place. To somehow record this place in a way that is communicable to others who may only be looking… or, maybe, even, not looking.

It’s a combination of expectations and what happens to be made available to us. When we see it we recognize it and it becomes an epiphany. Remember how the audience applauds when they hear the familiar theme. “The subject matter of my paintings slips between what is and what is not, half-remembered, half-forgotten images that haunt my childhood and persist in my dreams.” (Helen Nelson-Reed)

Your idea of “alpine meadows” has a great deal to do with the passion to win. Those who are looking to succeed—in anything—leave themselves open to those impressive moments that are or can become the basis of what they do. Such openness makes it possible for some to explore and exploit where others dare not go. It helps these beings to see more clearly and it gives them what is popularly known as success.

There is indeed a wonderful mechanism in our brains for “burning in” special places in time. I was sitting at the beach having breakfast with my sons early one beautiful spring morning. The sound of the gentle waves, the smell of the salt air, the warm breeze and the sheer joy of the moment were all things that I suddenly realized I wanted to be able to remember forever. I took the time to make a mental snapshot. My sons are now grown with sons of their own, but I still often refer to that special place in time that is stored forever in a mental snapshot.

I think you’re right about The Ten Moments, give or take a few. With me, it might be something seen in the world — an experience like your “alpine meadow” — or a scene in a movie, or something read in a book, or seen only in my mind. It has to be an image, though, not just an idea. Usually, my efforts to make an image out of an idea don’t work out. The image must come first, usually unexpectedly. Making sense out of it may or may not follow. The important thing for me is to get it down as a sketch immediately. It may seem so dramatic and vivid that it will be there in my head forever as permanent resource. Not. If I don’t make it into something tangible on the spot or very soon afterward the image is lost. Photos don’t work for me at this stage. The photo is never what I saw — it never records that Moment.

If we could make sense out of our Moments — if we could track them to their source — I think we would find them to be linked somehow to important emotional episodes in our lives. They might be archetypal or they might be purely personal, but the unconscious need to express them — make them visible, give birth to them, exorcise them — is probably what fuels our creativity. All of our images could probably be grouped around these Moments. Yes, ten is enough. More would be unbearable.

Flopping in the Rolodex
by Sara Genn, Vancouver, BC, Canada

Second time around
by Sharon Williams

I have been honored to be in such places several times in the past. Spaces that capture the imagination, places that are hard to leave. These are the spots where you kick yourself for only having your camera and not your paints, because you just know the camera will leave out the magic, fearful that your memory is not as good as it will need to be to contain all the feelings you have as you investigate this wonder. I am revisiting such a place this weekend. It is a small waterfall in the Crowsnest Pass, Alberta, Canada. I am not sure what it was that made it so remarkable the first time I was there — was it the light, a sensitive time in my life, an answer to an unspoken prayer? For whatever reason, it resonated with my soul. I have done a number of paintings of it, many of which captured the magic that I felt. I am excited about the visit, but also a bit apprehensive. What if it fails to touch me this time, will my dreams be shattered, the magic gone? Perhaps it is best to not go, but then again, what if it is even better the second time around? So I will go.

The soul of the artist, painting a landscape and sharing the spirit and powers with the Life Force, like the Great Lifeweaving — I find the story of painting a rocky shingle in Ireland an inspiration to get over a longstanding block to my progress which comes to table for confrontation as I am invited to help in a major civic project, the positive and creative and beauty spirits of the landscape are the proper vitamin, and the image of a rocky coast is a green light for tackling something major and winning. I love my art… such fun.

I have a charming small book by Winston Churchill called Painting as a Pastime. Published in 1950, it contains amazing thoughts and inspiration. He talks about his life in 1915, when he was a spectator of the tragic unfolding of the First World War. To quote Sir Winston, “And then it was that the Muse of Painting came to my rescue — out of charity and out of chivalry, because after all she had nothing to do with me — and said, “Are these toys any good to you? They amuse some people.” “Painting is a companion with whom one may hope to walk a great part of life’s journey… Age cannot wither her nor custom stale Her infinite variety.” “Happy are the painters, for they shall not be lonely. Light and color, peace and hope, will keep them company to the end, or almost to the end.”

I facilitate a “painting process” as a type of therapy. It is one of flushing out subject matter from the inner well. Jung wrote great quantities on the “collective unconscious” and the “personal subconscious.” It is in here that symbols and images reside, unique to each person. The paint process is about moving down the Ego/Self axis to tap into this well. As the initial journey is fraught with fear for many, my work is to act as a guide until the individual becomes acclimated to the journey. Later, I facilitate movement through the “stuck” places. The space we paint in is safe for exploration and each artist learns how to honor and respect the hard copy of the journey within. It has been helpful to teach people when and with whom to share their journey, as well. For some, it is a challenge to view his/her own work without judgment… so teaching loved ones how to “see” and “share” the process pieces without being critical and judgmental is one of the hurdles. (Although, some choose to just keep it as a secret garden and never open it for viewing by others.)