You are at:Home»Letters»An artist’s rifle
By ShawnA November 11, 2016 Letters

In 1859, in response to growing threats in Europe, an English art student named Edward Sterling put together a new volunteer army regiment. Though eventually broadening to include other professions, the group began as painters, sculptors, poets, musicians, actors and architects and would serve as a defensive unit in various home capacities including The Second Boer War. By the turn of the 20th Century, The Artists’ Rifles Volunteer Corps was one of the most popular military services among university students. 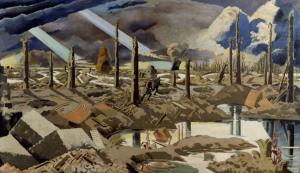 Paul Nash and his brother John grew up in rural Buckinghamshire and enjoyed botany and landscape painting. After studying lithography, photo engraving, poetry and writing plays, Paul entered the Slade School in 1910. Struggling with figure drawing, he instead honed a broody, modernistic landscape style inspired by his heroes William Blake and Rossetti. By 1913 Paul and his brother John were exhibiting their work and finding their way in the world as artists. 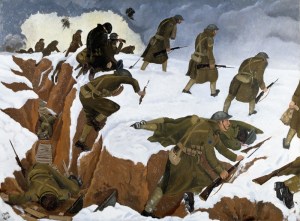 At the start of The Great War, Paul enlisted as a private for home service with The Artists’ Rifles. His duties guarding the Tower of London afforded him time to paint, and he fell in love and married suffragette Margaret Odeh. By 1916 Paul was in Officer’s training and within a year headed to the Western Front. In quieter moments, Paul recorded the ravaged and recovering landscape of Ypres – he was torn, but also inspired by the horror of destruction and the resilience of nature, which was uncovering itself before him in the spring snowmelt.

By early summer, Paul had fallen into a trench, broken his rib, was returned to London and, within days, his former unit was all but wiped out in an assault. In convalescence, he turned his sketches into finished drawings and watercolours and exhibited them in France and England. After a nudge from an artist friend, Paul applied to the War Propaganda Bureau to become an official war artist. While preparing to return to France for combat, he received approval for the commission and went back to Ypres — not for action, but as a uniformed observer. Provided with a driver and batman, Paul faced describing the now totally desecrated, flooded and bloodied landscape of Flanders, all while under heavy shellfire. He channelled his devastation into dozens of daily drawings and extended his six-week posting to assist the Canadians at Vimy. His resulting “50 drawings of muddy places” would become watercolours, lithographs and studio oils, all designating the destroyed environment as an innocent, collateral victim of war. 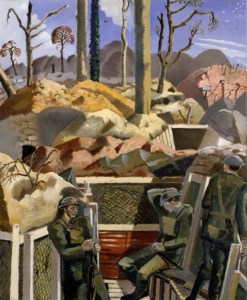 “Spring in the Trenches, Ridge Wood, 1917”
painting by Paul Nash

PS: “I am no longer an artist interested and curious, I am a messenger who will bring back word from the men who are fighting to those who want the war to go on for ever. Feeble, inarticulate, will be my message, but it will have a bitter truth, and may it burn their lousy souls.” (Paul Nash, in a letter to his wife, Margaret, November 16, 1917)

Esoterica: During The Great War, over 15,000 men passed through the Artists’ Rifles, with 2,003 killed, 3,250 wounded, 533 missing and 286 prisoners of war taken between 1917 and 1918. Their memorial stands in the entrance portico of the Royal Academy at Burlington House, London. More than 25 official war artists, including Paul and John Nash, were working for what would become The British War Memorials Committee by the end of 1918, and many continued their work into the Second World War. The exhibition “Paul Nash” is on view at the Tate Britain between October 26, 2016 and March 5, 2017.

“Lest we forget.”  A Terrible Beauty: British Artists in the First World War 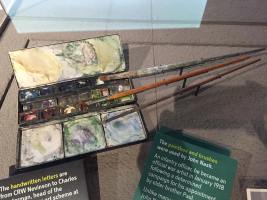 “Everywhere are old farms, rambling and untidy, some of course ruined and deserted, all have red or yellow or green roofs and on a sunny day they look fine. The willows are orange, the poplars carmine with buds, the streams gleam brightest blue and flights of pigeons go wheeling about the field. Mixed up with all this normal beauty of nature you see the strange beauty of war. Trudging along the road you become gradually aware of a humming in the air, a sound rising and falling in the wind. You look up and after a second’s search you can see a gleaming shaft in the blue like a burnished silver dart, another and then another…” (Paul Nash)