You are at:Home»Letters»An exercise
By ShawnA April 11, 2017 Letters

Here’s an exercise that you might try the next time you’re having a bout of creative constipation. I’ll relate it to painting but it works as well if you’re sculpting or writing a short story. It goes like this: 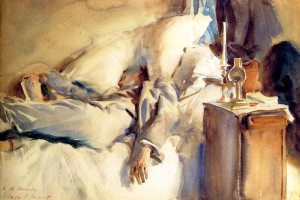 Make a painting that looks like it was done in five minutes, but take at least two hours to do it. Go seriously to work at making the thing and the job look casual and easy. Give it flourish and spin. Get the gestures right with freedom and paucity. Put meaning and form and character and abandon in every stroke. Avoid the sin of overworking.

Here’s a simple formula that will help you accomplish this: Look three times, think twice, paint once. It’s a method that’s time honored and true, but disarmingly easy to forget. You can choose to be calculating and think it out as if you were decorating a cake and must only squirt once. Or you can commit quickly in the full and comforting knowledge that you can scrape it off right away. I admit that in watercolour, the latter system is a tough one. 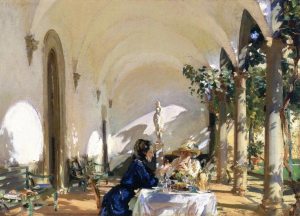 Keep in mind that when a master does something, she is able to compress her contemplation into a short period of time. It may appear that she is not thinking at all — but through time she’s been able to compress the accumulated information on her disks. But even a master has to go slow when she pushes into new territory. And then the new territory takes over, and it comes again fresh.

If we would make our work appear effortless we need not do other work at all. 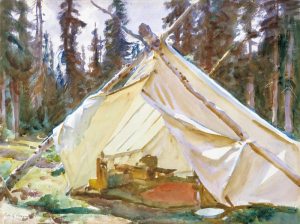 “A Tent in the Rockies”
watercolour by John Singer Sargent

Esoterica: This exercise is the fastest way I know of to start giving your work a new freshness. In case you hadn’t thought about it, there are two main schools of paint application: (1) The “Put on and see how it looks and wipe it off and try again” school. (2) The “Think about it and get it right the first time and let it be” school.

This letter was originally published as “An exercise” on March 3, 2000. Also included is an excerpt from the letter “Sprezzatura” published on July 15, 2003.

“You can’t do sketches enough. Sketch everything and keep your curiosity fresh.” (John Singer Sargent)