You are at:Home»Letters»An insomniac’s brief
By ShawnA June 2, 2017 Letters

In July 1977, a broke and couch-surfing screenwriter was sparked to action by a book of paintings by a Swiss surrealist. He called the artist in Zurich and invited him to work on some concepts in Hollywood. The artist, an insomniac who suffered from night terrors, was also afraid of flying, so they agreed instead on England, where for 11 months the artist lived above a pub in Shepperton, Surrey. There, he built a prototype out of Rolls Royce parts and reptile vertebrae, working only from a brief sent in the form of a letter from Los Angeles: 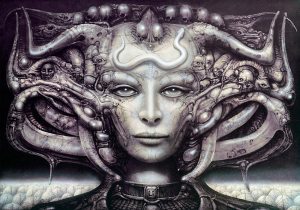 INTERIOR, TEMPLE. This is where the Spore Pods are stored. This room is entered through a vertical tunnel in the roof (the normal entrance has long since collapsed). The Spore Pods can be seen ranked around the altar in the center of the room. 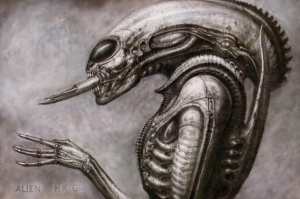 SPORE PODS. These are leathery, egg-shaped objects about one meter tall, which contain the larva of the Alien. They have a small “lid” on top which can pop off when a victim approaches.

THE ALIEN, FIRST PHASE. This is a small, possibly octopoidal creature which waits inside the Spore Pod for a victim to approach. When someone touches the Spore Pod, the lid flies off, and the small Alien (First Phase) leaps out and attaches itself to the face of the victim. 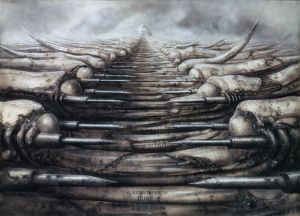 THE ALIEN, SECOND PHASE. Once the Alien (First Phase) has attached itself to the face of a victim, it lays eggs in the victim’s stomach, and the egg grows into the Alien (Second Phase). This is a small creature, which bites its way out of the victim’s body.

THE ALIEN, THIRD (MATURE) PHASE. Having left its victim, the Alien promptly grows to man-size, whereupon it is terrifically dangerous. It is very mobile, strong, and capable of tearing a man to pieces. It feeds on human flesh. This creature should be a profane abomination. Our producers have suggested that something resembling an over-sized, deformed baby might be sufficiently loathsome. In any event, we wish you to feel free to create your own design.

In 1980, Swiss surrealist H.R. Giger and his production team won the Academy Award for Best Achievement for Visual Effects for their work on director Ridley Scott’s science fiction horror, Alien, written for the screen by Dan O’Bannon. “I took one look at it,” said Scott, upon first seeing Giger’s work, “and I’ve never been so sure of anything in my life.” 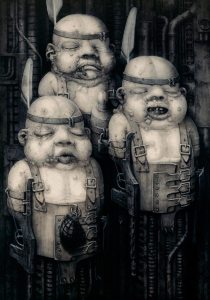 PS: “There is hope and a kind of beauty in there somewhere, if you look for it.” (H. R. Giger)

Esoterica: Hans Ruedi Giger was born in 1940 in Chur, Switzerland and started painting as a means of art therapy for his nightmares. Channelling his love of Egyptian mummies and machinery, Giger began with small ink drawings, eventually working in oils, airbrush and pastels. At the prompting of his father, a pharmacist who viewed art as a “breadless profession,” at age 22 Giger enrolled at the School of Applied Arts in Zurich and studied architecture and industrial design. In 1969, at the age of 29, he got a break when Switzerland’s first poster printing company published and distributed reproductions of his paintings. By 1977, Giger was a regular illustrator for Omni magazine, had designed record covers and furniture and made documentaries. In 2014, at age 74, Giger passed away in Zurich after suffering injuries from a fall. That same year, Exotica Plants of Australia named their latest, hybridized, flesh-eating, long-toothed, spiky, hair-encrusted plant, Nepenthes H.R. Giger in his honour.

“Some people would say my paintings show a future world and maybe they do, but I paint from reality.” (H. R. Giger)