“So what’s your angle?” a subscriber asks. I try to think what he means. Yesterday I protested in my return letter that I don’t have an angle. I’m just a guy who likes to paint. I guess I’m also guilty of trying to empower others. Then again I think it’s a matter of considering how others might empower themselves. I’ve decided that “what’s your angle?” is a valuable question. 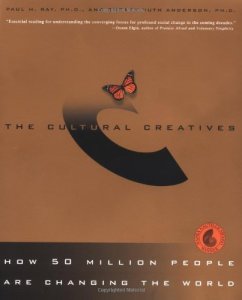 My angle is that generalized lives aren’t too effective. All-encompassing woo-woo fancies and feel-good panaceas are old hat. Collectivization is dangerous but brotherhood and sisterhood aren’t. In addition, academia is suspect and criticism has wandered off to another planet.

My angle is that by following an intensely personalized process you are led to growth, self-esteem, success and a degree of happiness. My angle doesn’t offer to fix everything, but it has the beauty of practicality. It works. My angle is to train yourself to be absorbed in a specialty whether it be bookkeeping, bee-keeping, good-housekeeping, philately, marathoning, inventing the light-bulb or painting watercolors. It has to be something with enough complexity to hold an inquiring mind. My angle is to do the spadework for the growth of passion.

Esoterica: There’s another popular book going the rounds these days: The Cultural Creatives by Paul Ray and Sherry Anderson. It describes a supposed phenomenon whereby a growing number of sensible and sensitive people are currently affecting our world in a positive way. Many artists will fit the profiles that the authors describe.

I think a lot of art has become diluted because the spadework isn’t there and/or the brain is allowed to dominate the heart and the hand (to use a couple of your metaphors). I think it’s important that when practitioners of art are able to speak eloquently about their work processes, that they do so – as you do in this letter. It’s really important, I feel, to describe art in terms of rehearsal as well as in terms of inspiration. Not rehearsal in the sense of too much pre-planning of an artwork, but rehearsal in the sense of preparing oneself through life, through drawing and through experimentation, where the artist takes his or her eye “off the ball” for a while and is prepared to be caught unawares by an emergent visual fact and yet ultimately capitalize on that fact as a newly discovered personal gem idea. With this in mind, I love reading the interviews that David Sylvester did with Francis Bacon and those collected interviews of Matisse in the book by Jack Flam (Matisse on Art ). I really felt inspired by today’s letter and found much to agree with. When one’s confidence in one’s artwork is built through practice — who can argue that away with words? Personally, I’m not immune to verbal criticism of my artwork, but I feel that my practice has already built something slightly more bullet-proof than any literal argument.

Not a hobby
by Mary Dresser

Thanks for your angle. A friend lately commented that my art-recreate old masters technique, is a hobby. Very irritating!!! Not only do I put my all into it, I think they are good. Your article said it all. Why do people consider producing beauty a hobby? There has to be a short reply that will stop them from this shallow mind set.

Labor of love
by Paul Constable

The question you answered this past week, “So what’s your angle” crops up from time to time with the Artist’s Website Directory my brother and I started a few years ago. Unfortunately our world is full of skeptics and scammers that rob the positive energy of many people with an idea or dream they are willing to act upon. The Internet is a great communication resource, but as animals around a watering hole, it will also attract the predator. This creates an uneasy defensive mechanism in us, unfortunately many miss out on something they would enjoy. I sometimes wonder why I spend 20 or so hours a week working on the website. In building the web site, my brother and I now have something in common, plus I have met a number of great people through the internet I wouldn’t have otherwise known. My brother the same, plus he has developed his data base and web site skills to a point where our site can offer art related services specifically tailored for visual artists and their interests. These skills keep him current in a rapidly changing industry.

I’m an electrical engineer by profession and an artist at heart. My fantasy is to some day become an artist by profession, or at least an artist without a profession. When I was young trying to decide what to do with my life, I chose a path that I thought would provide a reliable income. I ignored my heart. It has taken me almost 30 years to realize this. I’m in the process of getting back on the path of my heart, and your emails provide me with insights and encouragement.

Just don’t get it
by Deborah Russell, Lutherville, Maryland, USA

People have asked me the same question from time to time. “Perpendicular to the circumference of a smile.” has been my answer on more than one occasion. I just feel that sometimes people just “don’t get it,” and feel that everyone has some “angle to wangle” especially when it comes to the business of art. In all seriousness my “angle” has always been to do as much as I can for myself and others, without drawing lines between the good and the bad. It is hard sometimes not to step on the cracks, especially when the sidewalk is crumbled with age, but we just do what we can do and move on down the road.

Block out the negative
by Faith Puleston, Germany

I think it is fair to say that you get out of something what you put into it, so it’s actually logical, and for an artist surely a necessity, to invest as much of yourself as possible into what they are doing. The quality an artist has to have most of is the belief that all things are possible (even if some miracles take a little longer). The person looking for your “angle” has simply missed the point, not only of the newsletters, but of their own existence. He is not able to understand that caring for the needs of others (whatever form that might take) and does not need an angle. I believe that every act of creation is like a newborn child, needing loving care and lots of attention, consuming your time and energy, and not necessarily profit-making. But if the urge is strong enough, you keep going. My voice teacher at college always said “you have to have blinkers on” when she felt there were too many distractions from the “straight and narrow”. She was right. You have to literally blot out negative influences such as a question like that might engender. The German composer Max Reger once said about a rather negative newspaper review: “I have your remarks in front of me. Soon I shall have them behind me.”

The key
by Zoe Hecht

“I’ve found that the greatest joys come from the confluence of brain, heart and hand.” Here’s a meaty, albeit abbreviated wealth of mature knowledge. Viktor Frankl: “Will to meaning, would applaud you, as I do, for this succinct enlightenment. Getting one’s nose into the subject is the key to self-actualization in the grandest sense.”

The very opposite to the “angle” philosophy is the television set. It is the worst destroyer of the human spirit, worse than any drug. It seems so innocent and attractive, yet it has everyone fooled.

One of your readers commented on the flatness of Saskatchewan. Some of Canada’s most beautiful scenery is in our province. My wife and I have a summer residence/painting retreat on the edge of the Qu’Appelle Valley, 8 miles north of Wolseley, which is 60 miles east of Regina on the Trans Canada Highway. Every day, winter or summer, presents stunning landscapes awaiting interpretation by the wide awake artist. I hope that travelers will take the time to meander a bit through this special part of a special country. There is a lot more than meets the eye.

I’ve been a self-supporting artist for the last 50 years. Just recently I became aware of your web site, And even more recently bought your book. You go into a fair amount of detail about Canadian taxes (on page 98). I get the impression that artists get a different deal than do other civilians. My wife and I plan on moving to Vancouver Island some time in the next year. Although I live in the United States, I am also a card carrying Canadian citizen. Is there a web site that you know of that could bring me up to speed regarding the tax situation up there? I hear horror stories about how high the taxes are in Canada and while I can’t imagine it being much worse than here, a little knowledge wouldn’t hurt me either.

(RG note) The Canadian tax situation is about the same as in the USA, except it’s a little more punitive. Having said that, artists with large cash flows in both countries can deduct or depreciate just about everything for the sake of the muse: cars, planes, motor-homes, travel, materials, assistants, studio space, shipping, etc. I recommend you talk to Bob McMurray. He’s my accountant, he specializes in artists, and has cross-border clients.

You may be interested to know that artists from every state in the USA, every province in Canada, and at least 80 countries worldwide have visited these pages since January 1, 2002.

That includes Anne Gunderman of Buffalo, NY, USA, who says, “Life is art!”

And Norma Hopkins of Bolton, Lancashire,UK, who says, “I, too, try to empower others who are searching for self-expression though creative embroidery.”