A painter who spends a lifetime following his nose sooner or later meets with some of his collectors. While I don’t believe it’s necessary to encourage this sort of thing one often finds good friends among them. For me, one has been the Montreal collector Stephen Jarislowsky. 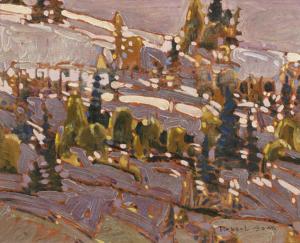 Stephen is a typical collector in some ways, unique in others. He told me once he had the only good Genns that were ever painted. As if everything of mine he never saw were not so hot! He is frank and quick in his decision making and generally goes on gut feeling. The work either connects for him, or it doesn’t. A lot of his collectorship is based on what I call “maverick paintings,” that is, they don’t have to be typical as to style or subject matter. Thank goodness for this type of person. He is interested in an artist’s growth rather than safety. He collects what he likes and he likes to collect. While he always purchases from dealers he doesn’t seem to be influenced by them, and he’s not influenced by critics or fashion for that matter.

His art collection ranges from modern to traditional and through all media. When he is not collecting he uses his wealth to endow universities. “I’m interested in excellence,” he says. He’s got chairs all over the place; economics, history, medicine, art history. “I try to avoid the conspiracy of mediocrity,” he likes to say.

When artist and collector come together repartee flies and opinions coalesce. The magic is more evenly shared and it seems worthwhile for both.

PS: “He is a Patron who looks down,
With careless eyes on men who drown;
But if they chance to reach the land,
Encumbers them with helping hand.” (Austin Dobson)

“When you know the artist you think less of the art.” (George Bernard Shaw)