You are at:Home»Letters»Art walk
By ShawnA October 9, 2015 Letters

On the morning of August 9, 1974, French high-wire artist Philippe Petit rigged a 450-pound cable between the Twin Towers of the World Trade Center and for 45 minutes walked, danced, lay down, kneeled and saluted, 1350 feet above an impromptu crowd in the plaza below. Because he believed that all great creative acts are a kind of rebellion, Philippe called his unauthorized walk “the coup.” After being arrested, released and sentenced to perform for children in Central Park, Philippe celebrated his 25th birthday and made New York his home. 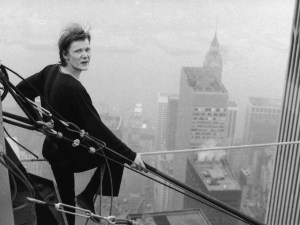 “The impossible – we are told – cannot be achieved. To overcome the ‘impossible,’ we need to use our wits and be fearless. We need to break the rules and to circumvent – some would say to cheat.”

“I’m known to make my dreams come true,” he says, describing a release of fear at an early age — and learning to tie knots.

“Passion is the motto of all my actions.” Philippe taught himself card tricks and club juggling at age six — before his hands and body were big enough to pull off the illusions.

“Tenacity is how I kept at it against all odds.” As a teenager Philippe would draw a circle on the street and perform silently within it as a sacred space for art, his way. 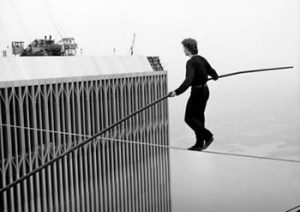 “Intuition is a tool essential in my life.” Getting expelled from school only fuelled his appetite for self-directed, personalized learning.

“Faith is what replaces doubt in my dictionary.” Philippe and his walk were an overnight, worldwide sensation — a breath-held poem gracing the void between the world’s tallest skyscrapers. On fame, Philippe said that he was never interested in “collecting giants” for the sake of dare-devilling or glory. He places his Twin Towers walk on the same artistic level as his boyhood street gigs — audaciously renegade gifts to polish the soul of anyone willing to stand at the circle. 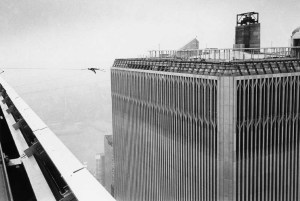 “I am the poet of the high wire – I never do stunts; I do theatrical performances.”

“The limits exist only in the minds of those who can not dream.” (Philippe Petit)

Esoterica: Philippe performed the “coup” just weeks before the towers’ completion, generating universal affection and kind of a blessing to New York’s newest additions to the skyline, up until then seen as somewhat drab. In his 2002 book, To Reach the Clouds, Philippe Petit recounts in detail the inspiration, planning and execution of his impossible idea. In 2008, Man on Wire, directed by James Marsh, won the Oscar for Best Documentary Feature, among multiple awards. A children’s book and animated adaptation were released in 2005. Recently, director Robert Zemeckis created the IMAX 3D movie The Walk, a cinematic re-creation of Philippe’s high-wire walk that almost puts you on the rope with him. “There is no such thing as motivation in my world. I am not motivated to do what I do. As an artist, I am driven, I am compelled, I am thrust forward by a force so rooted inside me, so convincing, that it seems futile to try to explain it,” says Philippe Petit. “Although it has a name: passion.”