You are at:Home»Letters»The Empire of Art
By clearmarble February 16, 2001 Letters

Unlike the Roman, the British, or any other Empires under the sun, the Empire of Art rises from grass roots just about everywhere. While its citizens speak a variety of tongues, they are understood pretty well universally. If you include the larger sphere of the written arts, photography, film, video and the spoken word, it’s one of the greatest communities in the history of mankind. This Empire has as many states as there are artists, and all these states have unique and sovereign constitutions. And while many have agendas, motives and philosophies, many others are content to simply honour our world and its life.

Unlike religions, which have a history of divisiveness, the Empire of Art, while full of factions and schisms, brings people together on common ground. While it will not be possible to run out of words to talk or write about it, art’s unique quality is that it’s a “doing” thing. It’s mainly a private activity, like prayer, which takes place in our own sanctuaries. Further, it seems logical to the citizens of this Empire that they have as much right to honour our world at a distance as closer to home. “Citizen of the World,” is a privilege frequently claimed by artists.

Does this Empire have any moral fiber? When we look around we cannot help but be amazed at the facility of our collective hands. These hands assemble, draw attention, make beautiful, monumentalize, and take part in ongoing creation. When we look at the hands of Da Vinci, Gauguin, or Andrew Wyeth, we see evidence of this Empire. The contribution of our Empire is destined to continue and to be even greater, and the greatest of all will be respect. 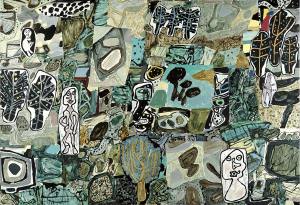 Esoterica: As an aid to quality it’s useful to realize we’re taking part in something greater. At an ancient mahogany easel, an Underwood portable, or at a Formica table in a kitchen corner, we make modest objects that have a brilliant and civilizing potential.

The following are selected correspondence relating to the above letter. Thank you for writing.

Respect is needed for the preservation of the beautiful, in nature and in the hidden realms of the human psyche. Thankfully, we can have some part in furthering the joy, but it is often a courageous act. As you have said in a previous letter, “We artists stick ourselves out. This in itself deserves respect.” If all we ever succeeded in was respect — that would be enough for this world.

Just don’t be a bore
by Val Nelson, Vancouver, BC, Canada

I like to think that art is universal, regardless of the language of the artist. The art that I (and my friends) can relate to the most doesn’t require a critical theory manual to explain what it’s about. Also, for me it doesn’t matter that the viewer “gets” exactly what the artist intended; if the meaning of the work can be interpreted differently by various viewers, that makes it interesting, and can promote lively discussions. Regarding the relative “merit” of art mentioned in your previous newsletter — as long as it isn’t boring, I think a work has merit.

Part of the ant-hill
by Gurpreet Jouhal

Not only are we taking part in something greater, but we are the unknowing minions of the greater whole which could be called universal. We are all working out our own small parts of a great cosmic art, fooling ourselves that we are original and unique, while in fact we are merely part of the building, taking down, and maintaining of the ant-hill.

I was very impressed with your attempts to collate the cosmopolitan experiences of the art community with online art sales. Most everyone, including your site, are failing to incorporate video and audio voice-overs. The software is out there to allow anyone to make their sites a rich multimedia experience. Technology is improving on a daily basis so there are only a few valid excuses for not putting a presentation edge on a site. The result of my investigation has led to a video clip of my father, the caricaturist Tony Rafty, being included on his web page. Shortly, audio voice-overs will be added to all pages.

Furthermore, an artist must have something unique to offer a buyer. For Tony’s art the uniqueness is the subject signatures on over 2,000 originals developed as collections covering a time period from 1936 – 2001. Tony has established himself as an international icon for caricature art as witnessed by the approval of his high profile subjects autographing the artwork. Tony has built up the most extensive collection and perhaps the only collection of subject signed art. The art will be sold to the highest bidder by the end of the year.

A photographer friend of mine takes documentary shots of local businesses for touristy-type and/or advertising cards. One of her clients is my neighbor, a small hotel. Apparently, they used one of her images for an advertising brochure, without a release or compensation. When she went to them about it, they (in my opinion) used blackmail tactics, e.g., “Well, if you want to continue to sell your cards here”… etc. It came out that they have been using her images extensively and internationally, for brochures and other advertising. When push came to shove, they basically told her to go take her beef to the ad agency. My understanding is that the buck does actually stop with the publisher of the image(s) (ad agency). What recourse does she have? Beyond legal fees way in excess of any compensation she may receive.

(RG note) This sort of thing is more common than one would think. Yes, and the legal fees would be greater than the potential settlement. I’ve only gone after someone when I knew the usage was not small potatoes. Often; don’t complain, be a nice guy, and keep friendships is the best way. Don’t lose sleep either. Take joy, and know in your heart they have taken your carrots, but you have bought their souls for peanuts.

Voice of the united spirits
by Monika El-Seroui, Graz, Austria

The true artist resolves his work by meditation. This means the process goes through the mind until birth is given to any visible work whether it is consciously or unconsciously. The wonderful communion between the earthly side of mankind and the spirit of the universe creates. And so taking all the diversity into account will show that all together are having their united voice — pledging for freedom and respect so that our earth and its inhabitants holding love above all for our world. It’s the voice of the united spirits making beauty and consciousness visible for attention. It is obvious that an artist just has to stick to his own expression even if gallery owners are requesting other expressions. Only being true to oneself will satisfy the communion of the artist’s unique and also united spirit. Nowadays gallery owners here in Austria are very much selecting which artists they want to exhibit. So the mainstream is selected more or less depending where galleries are located. Some artists are out of the circuit, do not associate with the right kind of people, and are consequently cut out of potential success.

While we may applaud your attempts to give a sense of community to the arts — we must also accept that artists generally don’t share much. We’re not like a fraternity of on line orthodontists saving time and helping their clients by sharing the latest in bone medicine. Artists are sovereign, yes, but also isolationist and sometimes pig-headed.

Artist’s sense of place
by Jesi Barron, Victoria, BC, Canada

Many years ago I was living in the Chilcotin country in central British Columbia. I remember the wild horses visiting an old rancher at moonlight outside his house. They would call him out, and out he would come, give them a few apples, they would exchange a few words and snorts and just as quickly as they had arrived they thundered away into the darkness, back into the hills. We stayed in a very rough cabin, no running water, no electricity, no phone, no radio. Five hours over a rough road to the nearest store. I washed my little girl’s clothes in a bucket on a very small stove, then walked down to a Clearwater lake to rinse them out. Very cold and wet, in March, and the wind. I treasure my one and only watercolour painting that I did there in the wild open country.

I recently turned sixty years old. At the age of forty, I wasn’t where I thought I should be career-wise. I quit teaching sculpture, moved to the country, built a studio and house and began my art efforts full-time. I had my first art gallery affiliation with the Reynolds Gallery in Taos, New Mexico in 1963, just before I received my undergraduate degree in art. Since that time, I’ve always had my works in galleries primarily in the south and southwest. Currently, I have ceased all my gallery representation, with the exception of a local gallery in Denton, Texas. The main reason was the expense and difficulty with physically getting my work from Texas to Scottsdale, Aspen, Santa Fe, Destin, and Palm Beach etc. With supporting patrons who collect my works, I’ve found they can refer my sculpture to their friends who show an interest to my website, where one on one communication occurs, without the gallery representation or commission. Currently, I have works installed in the Art in the Embassies exhibit at the residence of the U.S Ambassador to Austria. My outdoor pieces are flanked by bronze sculptures by Joel Shapiro and Bryan Hunt. The works inside include art by Hans Hofmann, Donald Judd, Roy Lichtenstein, Robert Mangold, Claes Oldenburg, Jackson Pollock, Robert Rauschenberg, and Frank Stella — not bad company for a country boy like me.

You may be interested to know that artists from 77 countries have visited these sites since January 1, 2001.

That includes E Blair who writes, “Art is a language that many people can understand but few can speak.”

And Bill Cannon, who reminds us of “Artis Gratis Artes,” (MGM logo with a roaring lion).

And Kim Wyatt, who says, “Some people approach artmaking like the San Diego Chargers approach Football, once they know they are going to get paid, effort goes out the window.”

And William Dudley Gilhooly who asks only “for the courage to splash gouache.”