You are at:Home»Letters»An artist of Cuba
By clearmarble January 7, 2003 Letters

Artists present a problem for the Cuban socialist bureaucracy. Down here artists are characterized as “independent manufacturers.” In a quota-based economy the creative spirit, artistic effort and output are difficult to quantify. Take Fernando Luiz. He’s a 32-year-old father of three. He lives in a tiny upstairs apartment in a dilapidated building in one of the poorest sectors of Havana. If you stand in the middle of his studio, you can touch all four walls without bending. His wife, Daniela, a former chambermaid, is currently disabled. It’s a case of grinding poverty. Fernando, along with hundreds of other artists, sells his oil paintings in the open-air art market on the Malecon at Calle Tacon at the edge of the old town. He must pay the Cuban government $98 per month for the privilege of being a painter. While artists are free to attend the market, they are often too busy at home or bent over in doorways filling their quota. The work is sold by an agent. There’s a different agent at each kiosk although an artist may have his work at several kiosks. When a painting sells the agent collects 18% of the selling price. The state collects an additional 37%. The remainder goes to the artist.

Most of Fernando’s paintings change hands at between US$5 and $30. The American dollar, incidentally, is the currency of Cuba. Fernando sells between ten and fifteen paintings a month. Competition is stiff and it’s a buyer’s market. A foreigner who wishes to take a larger work with him must pay an additional $5 to a government agent who sits nearby. The canvas or paper is rolled up and stamped to show that it’s cleared for export. Fernando is a graduate of the Seminario de San Carlos y San Ambrosio. He works in many styles and subjects in order to find sales — semi-abstract nudes, parrots, naïve motifs, portraits of the national hero Che Guevara, caricatures of ’50s American autos. Framing is nonexistent. To most of our eyes Fernando’s work might appear garish, amateur, and repetitious. Smiling constantly, he admits that in spite of his credentials and hard work he has not yet mastered his form. “While waiting for my ship I keep busy,” he says, giving me a wink. He’s holding a pantless, grinning two-year-old named Cristobal. In his other hand is a well-thumbed monthly report.

Esoterica: One of the main problems is market-induced price control. There’s little of what I call the incentive for excellence. Idealistic commitment and the concept of serving the state don’t seem to be enough. The result is that individualism on the Calle Tacon is rare. But Cubans are a spirited people, and in spite of interminable floral speechmaking the independent “art spirit” has not quite been knocked out of them. 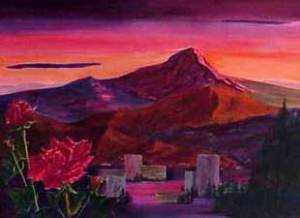 I constantly hear grumbles — and do my share as well — about the high commissions we as artists are asked to pay on any sales we make except those from our studios. And, yes, we have to pay taxes on income as well, but having read your news from Cuba, I think I won’t be adding to the grumbles quite so vociferously in future. Thanks for reminding us that we really have it pretty good even when the economy isn’t marvelous.

In Cuba it is not necessary to struggle against frost, to have winter coats and hats and the market is open all year, and tourists visit Cuba. There aren’t very many visitors in Moscow, which caused two large art galleries to close. Present art galleries take at least 35%, but if the artist is successful, they take even 100% while our tax level is at least 40.8 %. If the artist wishes to sell art independently on the street, he/she must pay “definite tax”. On the street he/she must pay different inspectors, militia (local police officers), as well as local territory gangsters. Of course, there are also export fees. Some artists have so called “roof”, which allows them to be above the system. We are constantly between Scylla and Charybdis (between equally dreadful alternatives) of money inflation and constant price increases.

We can ask contemporary Iraqi artists to post their personal portrait photos on the Internet immortalize themselves and their art after that the USA will bomb them in the next oil war. Might be the Cuban artists next, the oil is absent there, but the history has different experience. Of course, it might be more humane to give immigration visas to USA for all artists and scientists. It is an expensive project and impossible to confirm who is a real artist. The profit from future oil might compensate expenses to save art and science. And as we are artists of the Internet, all artists are our spiritual citizens and we must defend them in their spiritual life?

Santeria an influence on Cuban art
by Anonymous

A lot of what you are seeing in Cuban art is due to the influence of Santeria, the popular Cuban folk religion. Bleeding sacrificed chickens, God images, African roots, colorful, hard effects which are crude and angular to an outsider’s eyes. Those who truly know the Cuban people see this beauty for what it is. I know. I have lived in Cuba all my life and this vision is beyond the effect of any government, corrupt or otherwise, that might be passing through.

I recently returned from Cuba and was puzzled by the very different energy of the visual arts from dance and music. As you know, music is cutting edge. Dance is amazing. I made an effort to see what the painters were doing. Most of the work looked like all the other work. Probably tourist opportunity. I was disappointed in the lack of originality. I thought about the extremely amazing visual art coming out of Haiti — a hellhole. I wondered about whether some cultures were visual, others auditory & kinesthetic. The artist does have being paid in dollars on his side. Those who are paid in peso are really stuck including doctors and teachers. Clearly there are problems; I remain very curious about why the visual arts seem impoverished compared to music and dance?

Freedom is something we all strive for. But for an artist it is something held in the mind and in need to be sent to the world for all time — on paper, canvas, stone, or film — or even on a wall in New York City. The true artist in Cuba will find this freedom in their house of inspiration no matter what goes on outside their dwelling of creation. The last word William Wallace shouted out before they beheaded him was “Freedom!” Freedom in art is hard to capture in some repressive places, but we all must strive for it in our art no matter where we live. I wish the artist in Cuba well. We are all akin.

I wonder how well these artists would like to be here in America? Do they ever say or are they careful of what they say? It sounds as if the inner spirit is surviving and someday when they can be free they will do very well for themselves as a country.

(RG note) Cuba is an island prison where people risk their lives to escape. My experience is that people in Cuba don’t say much about anything that might get them into trouble, and they don’t want you to ask too many questions. However, a few artists who work the international exhibition system are able to get their work offshore and to personally attend foreign shows. One such artist, Kcho, has a world-wide reputation for symbolic installations mainly depicting boats. Recently Kcho very much wanted to be shown in the USA. He and his work, however, have been denied entry by the USA because of the current embargo of all things Cuban.

Wannabe in Cuba
by Marian Helsby

It makes me very glad I came home from Cuba with two wonderful paintings (unfortunately, the artist’s name is not visible) that are, I think, an immaculate portrayal of how I remember Cuba: lush, playful, political, sensual and sometimes sad. I’m only a wannabe artist (I paint once or twice each decade) but I remembered wannabeing more in Cuba than in any other country I’ve ever visited. 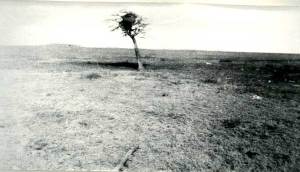 Wouldn’t the net be a good way for Cuban artists to sell their work if there was an easy, affordable way for them to post their work? Maybe a government approved collective of some sort? Could hook into the better net galleries worldwide?

(RG Note) Good idea. At the present time it would have to be a government collective. In Cuba it’s still difficult for private persons to access and use the Internet. 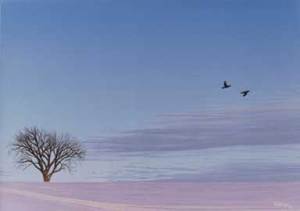 I really don’t know much about Cuba, other than it’s a socialist dictatorship, & I know even less about Cuban artists. Despite the terrible conditions portrayed in your letter, I couldn’t help but think of Ebay when you mentioned the quality of the work, the prices, & the buyer’s market. Cuban artists have no choice… what excuse do the free artists in a capitalist democracy have?

(RG note) Partly because of the very low prices that are being realized, there’s currently a bit of an international run on Cuban art. Ebay is one of the main players.

How does one apply for permission to visit Cuba? I propose to go as a teacher of architectural technologies (lighting and acoustics), which may suffer some of the ‘artistic’ limitations mentioned in your letter.

(RG note) Since the suspension of Russian financial aid and technology in 1991, Cuba has become more open to other foreign expertise. The country currently needs help in a lot of areas. Enquiry should be made at the Cuban Embassy in your country. Citizens of the USA who have in mind academic, artistic, or technical exchange with Cuba, face more obstacles than other countries. However, Swiss Consulates on US soil are a neutral ground where Cuban interactive potentials and opportunities can be explored. 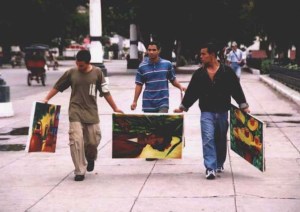 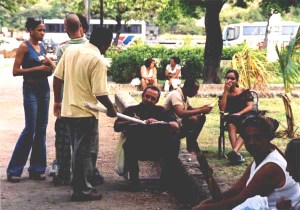 Government agent collecting US$5 on each painting intended for export. 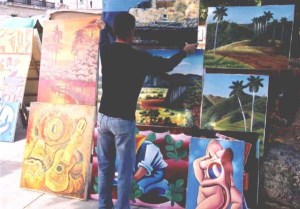 Artist’s agent setting up. Paintings on canvas are removed from stretchers and rolled when sold. 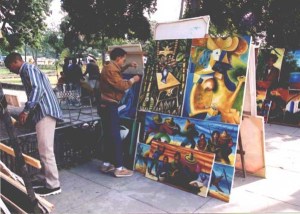 An artist and his agent. Painting in the middle is a copy of one in the local museum by Wilfredo Lam.