I call it the assertive eye. It could be something else, the corrective eye perhaps, but that sounds like surgery. It’s a condition. It’s an attitude. It’s a way of working. It depends less on planning and preparation than on being able to work it out as you go along. It’s a form of self-trust.

I first became aware of the condition while at a workshop. Perhaps it had something to do with the mild competition that takes place between some artists. Perhaps it had to do with the feeling of “extra time.” Maybe it was the new and unfamiliar environment that workshops provide. It may even have had something to do with my demonstrations. In any case, some artists had it when they arrived and others developed it during the workshop. I know that some artists took it home with them. Some who struck me as unlikely candidates, to my surprise seemed to just find it. For others, it seemed indefinitely elusive.

It could be compared to learning to ride a bicycle. At first it’s hopeless — a poorly-designed, wonky thing that falls over. Then, almost in a minute, you discover the inherent stability of the device as long as you are moving forward. Suddenly you trust the wisdom of the machine, and you are up there, breezing along, riding free.

The artist who uses the assertive eye is able to make decisions based on what he or she has just done. That includes accidents, mistakes and surprises. The process is an active, dynamic one. It does not have a specific recipe or a rigid drawing or plan. It flows out of itself until completion. There’s a bit of pressure to complete. Maybe that’s why I’ve seen it happen at workshops. For a while people are looking around and wondering if they ought to look like artists. Maybe it’s an act, they think. They are right. It’s an act that gets into the bones, becomes second nature and pays dividends in both satisfaction and professionalism.

PS: “Let the painting tell you what it needs.” (Charles Reid) “Painting is stronger than I am. It can make me do whatever it wants.” (Pablo Picasso)

Esoterica: I’m doing one workshop this year. It’s in Brittany, France. One lucky subscriber will be attending for free — everything: travel, accommodation, tuition. You can find out about it at http://painterskeys.com/workshops/

Along with my own work, I teach a workshop on photojournalism. I try and get the students to “shoot with intent.” One of the many questions this gets is, “Doesn’t that get in the way of spontaneity?” My response is often along these lines: “No. It means using your camera (Medium) alertly; responsively, hell, even reactively if that’s the case; with awareness of your surroundings; what are you seeing and trying to reveal; and lastly — use the damn thing! Be actively involved in seeing. Having it in the case with the lens cap on doesn’t get many good images. Make it an active extension of your eye and your creative mind. Don’t go out and plan to shoot a masterpiece. Just go and shoot. The rest WILL come… at some point.

Sometimes, the painting just takes over. It takes over the mind, the pencil, the brush. It even chooses the colors. It is a weird and wonderful feeling to be all caught up in something that is almost other worldly, no time to think, no time to question, just paint, one brush stroke after another. Perhaps it is the deep recesses of the mind, but if one can just let go with it, the painting that results is usually one of the better ones. I wish that it happened to me all the time, but of course, there are the paintings where everything is a struggle. Those are the ones where I learn.

Moments of recognition
by Deborah Russell

I know the feeling of giving a workshop or program and noticing a few of the participants coming away with something new. Sometimes it shows in their eyes or the way they smile. It gives the feeling of “a job well done.” I had many moments of “not knowing” if I had presented material well enough by using personal experience, but as the years passed I became more comfortable and confident with my presentations. Of course it never hurt to receive thank you cards and letters either. One of my greatest joys is to remember a few of my students along the way, and to remember an exact moment of recognition. That is one of the benefits I think that every teacher can share.

Interesting how information sometimes seems to arrive. I have been asked to prepare a drawing class for seniors and was considering teaching ways of looking for and seeing patterns to stimulate the eye, in an attempt to avoid the trap of trying to draw a photographic likeness. I had been taking my cue from a newspaper article on the jazz guru Kenny Werner who talks about his personal fear of consciously trying to be perfect. The demand and desire for perfectionism can go a long way toward blocking the creative flow.

I attended a workshop last November. The instructor was a unique character by the name of Uwe Nickel who looks every inch a bohemian. He has a big, chaotic studio in a nearby town here in North Rhine Westphalia. He is very productive, from murals to playground embellishment, cartoon to canvas. Our subject was free-style painting in acrylics on large or even larger thick paper. He provided buckets of paint in most hues and thousands of brushes, and he started by demonstrating with primary colors in such a way that you immediately thought: “Oh, I can do that,” which was, of course, his intention. I felt quite aggressive when I started. It wasn’t what I had expected after the watercolor demonstrations on an easel at my very first workshop and I didn’t think I would be able to “tune in”. I messed around for about 2 hours, then something unexpected happened. I realized that I had stopped thinking analytically and was just getting on with the job, painting compulsively and adventurously, using brushes, fingers and other implements, which were lying around, and generally having a good time. I didn’t talk to anyone. I just peddled away like on one of those fixed exercise bikes. The workshop was 9 hours solid painting, after which all one “candidate’s” artistic efforts were placed on the floor, matted, and we all went upstairs onto his Romeo-and-Juliette balcony to look down at them and listen to his comments. I was amazed at what people had produced, competing just a wee bit with the others. There was a huge variety, including someone who painted hearts, flowers and bunnies, and another one who did half a dozen Kandinsky look-alikes. It was like being born again. A great day.

Rewards of working through problems
by Brett

Right on about pressure. That is why we should continue to take classes and do seminars and workshops — no matter how advanced we think we are. Also, the good teachers learn from their students and all parties end up rewarded. Many people don’t want to work through the mistakes and just throw it out or start over, but the peer pressure forces one’s hand. The trouble is, we don’t learn from what comes easy, we learn from working through the problems. I find it hard to make myself do it sometimes, but when I do I’m always rewarded.

I believe that the painting and the painter must have rapport. They speak to each other about what needs to be done. The real art is in being able to interpret the communication, the back and forth, the painter makes a stroke it inspires another one or says we’re finished here. Once a painting is started, it’s a shared journey.

I picked up a two-inch Sabelite brush. It Felt Right. I played with it with (no paint) to just get the feel… I like the bristles — they feel good on the skin. I wanted to do some plein air. I was thinking about pattern, spirit and the two-inch brush. My muse, shutting the door, and Mozart, so did some thumbnails at night when my family was home to find pattern…had everything ready for the next morning to do some watercolors. When everybody was away I went to my easel and met with my muse. I did not let myself leave the easel and then only briefly during Mozart CD changes… I put in my slides and made them large so I pretended I was doing plein air… 7.5 x 11 supports and my two-inch brush and went to it… 7 starts the first day and the second day completion of most. I was so pleased in the discoveries! They are many and varied!

The following are a few of the 40 or so entries that have come in since last Tuesday. They are not necessarily finalists in the “Free Painting Workshop in Brittany with Robert Genn” contest. 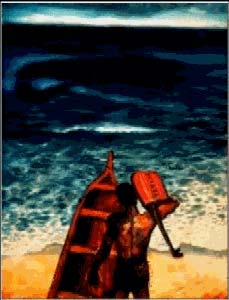 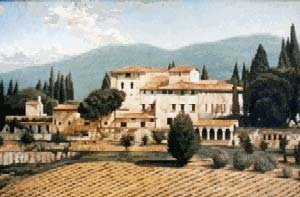 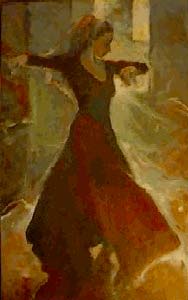 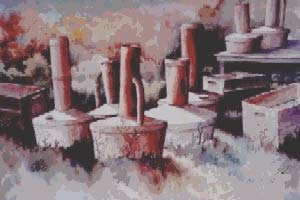 “Out of service”
by Otha Grant 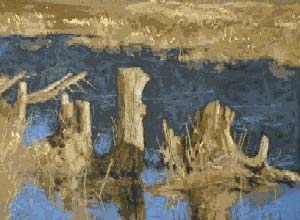 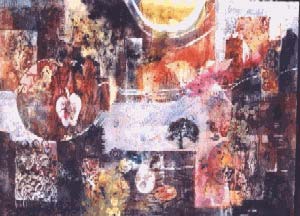 I would dearly love to try for the trip to France but hesitate to submit work for review as I am an abstract painter. Regardless, my most wonderful work times are spent out of doors in a place known as Garden of the Gods. Giant red rock slabs thrust from the earth eons ago, silence (excepting the occasional tourist) and an intense blue sky unique to Colorado. The intense beauty of the workshop destination seems parallel to my garden of the old ones, here in Colorado. Please let me know if my venue is worthy of submission.

(RG note) As the final jurors will be of a wide range of disciplines you can feel free to submit anything you wish.

You may be interested to know that artists from every state in the USA, every province in Canada, and at least 97 countries worldwide have visited these pages since January 1, 2002.