Joris Dik of the University of Amsterdam has trained some sophisticated instruments on Naples Yellow. From the 16th to the 20th century the chemical makeup of this lead/antimony pigment has been changed and refined dozens of times — for economy, permanence and quality. Spectroscopy has turned out to be a valuable way to authenticate, date, and geographically locate the origins of many old masters.

It seems to me that the scientific investigation of works of art is going to continue in heightened capability into the future. It’s bright indeed for the practitioners of forensic art investigation. It’s also a heavy burden on the artist when he or she realizes that some future sleuth may be writing a report on what we were doing wrong.

That’s why I like to give them a little extra interest. I call it “value added.” It’s a bit of a personal secret so I’d appreciate if it didn’t go any further than this letter. I try to make sure there’s one of Emily’s hairs in everything. Emily’s the Airedale. Before her there was Kelly the Kerry-blue Terrier, and before her Hombre the Poodle. The birth and death dates of the earlier dogs are public knowledge. Emily’s pawing an 11×14 as we speak. I’m sure their respective curls and DNA will be differentiated by earnest microscopists.

This mode of authentication kind of crept up on me. I didn’t plan it. It all started before I could afford a cleaning lady. Then, for some cone-headed reason I started to bury a little something somewhere in the impasto. Not too obvious. Generally it just happened and I let it be. After a while I started allowing one or two to hang right out there in the sky. The supply has always been readily available. It’s the hair of the dog that bit me, I guess. To my knowledge no one has ever complained. So far no one has put it all together. But they will. They will.

Esoterica: It’s all in the details. Valuable responses to the subject of the last letter on jealousy and envy are at http://painterskeys.com/jealousy/ If you’re interested in the research into Naples Yellow you’ll also find this information here.

I’ve grown very fond of you and your letters and will surely miss you but; they are going to take you away if you insist on admitting such things! It’s not wise to come that clean with ones idiosyncrasies. It’s one thing to have dog hairs in your paintings and another entirely to admit to purposefully putting them there. Have you been sniffing the painting medium or dipping your brush in the wine glass by mistake?

They tell a story
by P J Rumsfield, UK

In the motion picture “The Red Violin” the violin maker blesses his product by laying on the final varnish with a brush made of the hair of his beloved and recently deceased wife. Her blood is added to the varnish which gives the instrument its characteristic color and paves the way for sleuthing in more advanced times. In my opinion hair is an almost essential part of the patina of painting. When they appear I too leave them in. They all tell a story: Hog, sable, squirrel, synthetic, dog, cat, chest, head, pubic, implicating and inditing yesterday’s men or girls, loves won and lost, along with the grit and sweat, blood and tears that go into turning on the muse and making quality work.

Excellent topic! It’s fun to scrutinize artists’ works for those secret hidden fingerprints. I was taken by a Norval Morrisseau we purchased that included a coffee cup stain and some brush hairs. “This is authentic,” I exclaimed (with glee). It was relatively recent work and these extras were there probably more out of carelessness than intent. In the end, I was disappointed. When we picked up the painting, the dealer had cleaned it up a bit. I felt they compromised the integrity of the piece.

Great letter about the hairs, very inspiring. As for me, I wouldn’t be painting at all if it were not for a lover named Pam. I wanted to impress her and since I lived along the Jersey Shore I started painting on the clam shells that were abundant on the strand. It became semi-amusing, with works like “Clama Lisa” and the image of a huge clam rising from the sea with a woman clinging to its base, the “Clam of Ages.” I also painted a tattoo-inspired “Clam’s Ruin.” Eventually I made the transition to canvas, passing through a found plank stage. Pam got some of my work into shows and galleries, making sure to price it so high it would never sell and she could have it for her own collection. A few years ago she died of breast cancer. Since then, every piece has either “Always for Pam” or the more cryptic “AFP” lettered on in some hidden location. My work will never attract the attention of university types, and most likely there will never be any reason for anyone to doubt the work’s authenticity. If they do, however, my secret mark is there to go by. And anyway, I still paint mainly to impress her. 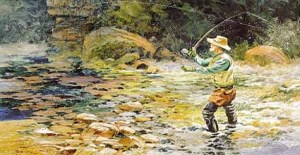 I have frequently included black flies in my art, when painting in the Adirondacks and in Maine. This is usually in late June, when the water temperature in creeks and lakes reaches 55 degrees. Sometimes these black flies simply get buried in a wash or actually are visible, if it happens to be a thin, light value wash. Never thought about your ‘concern’ or lack of, for those future painting ‘snoopers,’ but the black flies should also create a ‘stir’ among those ‘birds.’ A while back, I received a letter from an artist in Ethiopia, who was having a problem with fly droppings on his art. He asked for my recommendation as to how to stop the ‘droppings’ as the spots could not be removed without effecting the art. I thought, maybe those white specks could be incorporated into the design?

Hair of the dog
by Elsha Leventis

That is so funny! It reminds me of quilts… the Mennonites and Amish always put at least one flaw in their quite beautiful quilts; they believe that only God could be perfect (and wasn’t) so their quilts can’t be. By the way, there’s a little restaurant/pub around the corner from me called Hair of the Dog. I’ll be chuckling from now on every time I pass it.

I laughed out loud at your admission of including Airedale hair in your art. I also have been known to allow such ingredients to invade my work. In my case it’s Australian Shepherd(s). Now if I could just figure out how NOT to include it… Have you ever patted the back of a dog with glue on your hands? It’s a great way to make an inexpensive Wolfman costume. Gotta go, one of my dogs just entered the studio and he’s heading for a wet sculpture.

HA HA! Good one. I have a Standard Poodle who does not put hairs on my paintings — but the Irish Setter and especially the Bernese Mountain Dog DO! Is there a limit on the number of hairs you can have per square inch before it starts to affect the archival qualities of the painting? LOL

Shampoo that painting
by Joe Blodgett

I have actually produced paintings that are pretty well all hair. With acrylic medium as a base and a binder and careful placement the hair can be tufted and even combed and teased into different styles. They are quite permanent. The technique of growing hair on paintings is an imperfect art. For the time being implantation will have to do. Working together with a local hairdressing salon I intend shortly to have a hair car.

An insignificant hair here and there is nothing to write home about. Art students these days are being encouraged to put all kinds of things in there — chewing gum, band-aids, sandwiches, etc. The more biodegradable the better. Gives later conservators a challenge. Cigarette butts that Jackson Pollock dropped on his paintings didn’t always stick so well. We can visualize earnest conservators smoking same-brand replacements down to the right size and affixing them with more permanent adhesives.

Can’t you see it?… 50 years from now… An elderly lady on the “Antique Road Show.” The ‘Know-it-alls,’ having a tete-a-tete, (complete with a microscope) “Madam, sorry, it cannot be! We were unable to detect any of his dogs’ hairs in your piece!” Suggestion: Why not use your own DNA/RNA, as you certainly, (except, for accident or illness), will be around longer than your dogs — their life span being about 12-15 years at best — yours being…76.5, save for illness, accident, and acts of Nature? What do I mean? Incorporate, somewhere, perhaps the last letter of your name, a drop of your OWN blood…or merely a smear; that would be enough to verify your DNA and RNA, and thusly… “YUP, It’s a Genn.”

Although Attention Deficit Disorder is caused by neurological problems, I think it is really important to remember that children or adults who, as children, have been sexually, physically and or emotionally abused, also have the same “symptoms” as ADD. Abuse also runs in families, adults who were abused as children are often very creative and abuse can change the neurological structure of children’s brains. It wouldn’t be fair to accuse an adult of abuse when the child needs medication on the other hand it is not fair to drug a child who is trying to cope with being raped by an adult. How to cope with symptoms is always beneficial, but simplifying broad symptoms to a single cause can be very misleading and harmful.

My sister forwarded your letter. It is so amusing to read your letter from the viewpoint of another ADD adult. I do take medication for the unique challenge of trying to live in a world of organized and responsible individuals. I am going to try to remember some of your methods for “keeping it together.” I really like the idea of the garbage can on the belt. I was saying to someone today that it is a wonder that the left half of my head doesn’t cave in for lack of filling but perhaps the right brain has filled the void! ONE DAY I WILL COMPLETE A JOB! Keep up the good work.

(RG note) My letter and responses concerning “Attention Deficit Disorder” are at
http://painterskeys.com/add/

You may be interested to know that artists from every state in the USA, every province in Canada, and at least 93 countries worldwide, including Afghanistan, have visited these pages since January 1, 2001.

That includes Bern Bix of Luxembourg, who says, “In my paintings I carefully pick out the lint, especially in the sky, but I think there will be left many defects to assert my individuality.”

And Shirley Dominiak of Castro Valley, California, who says, “In Japan both artist and viewer save face because there’s always a flaw in the painting.”

And Elle Fagan of Connecticut, who says, “I don’t keep pets near my work, but I may get a pair of doves or a talking bird.”