You are at:Home»Letters»Bern Will Brown
By clearmarble July 22, 2014 Letters
Dear Artist, My friend Bern Will Brown is 86 now, but he’s still going strong. He’s spent the last 44 years in Colville Lake (pop. 100), an isolated outpost way up in Canada’s far north. Born in upstate New York, Bern spent his childhood looking across Lake Ontario and marvelling at the northern lights. “That’s where I knew I had to go,” he always tells me. 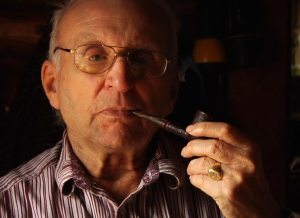 In 1948 he became an Oblate priest and was sent to a northern diocese. As a kid, he had painted in oils–so he took his paints with him. In 1971 he took up with Margaret, a part-native woman from Tuktoyaktuk, and this event precipitated his eventual defrocking. Along the way he and Margaret established the Colville Lake Lodge, a hunting and fishing resort that has entertained some of the crowned heads of Europe, politicians, movie stars, and just plain rich folks. He has a museum and art gallery on site, and this is where he sells his paintings. He hands his potential customers a key to the gallery and lets them look around in there. If they see something they like and bring it out to him, he wraps it up for them. Bern doesn’t like talking about his work. 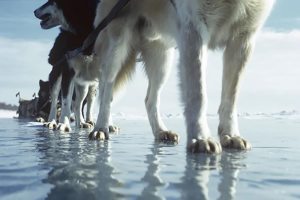 While isolation and the long winters make for cozy reflection and undisturbed painting, there’s a price to pay for being out of the loop. Southern art dealers have trouble handling his work because he insists on getting his price. He resents dealer mark-ups, and selling from home to northern travellers at direct prices has undermined his potential wider success. Further, he has made it even tougher for dealers by demanding that they supply him with the names and addresses of all purchasers. “So I can send them a Christmas card,” he says. Last year he and Margaret sent 750. The Browns have no email, no computer. But he knows exactly how many paintings he’s sold. “1342 to date,” he says proudly. “And there’s fifty in my gallery right now, ready to be sold. The prices are clearly marked.” He’s got a mind like a steel trap. Bern is his own best dealer. Bern loves his adopted land — the people and animals of the tundra and taiga. His paintings honour both the traditions and the changes. Dogs and canoes have transmogrified into skidoos and jet boats. Up until a few weeks ago he flew his own float plane. There’s nowhere up there that Bern has not been in order to get his stuff. 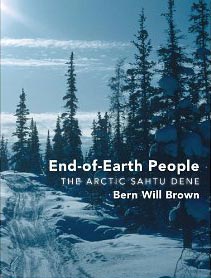 Best regards, Robert PS: “I had no idea that things would change so rapidly, so drastically.” (Bern Will Brown) Esoterica: Bern learned French and then the language of the Hare Indians. He mastered fishing and hunting, breeding huskies, building igloos and making snowshoes. As well as being the local priest, he served as carpenter, musician and medic — delivering babies, pulling teeth and flying medevacs. When he and Margaret married, they did so in “Our Lady of the Snows,” the log church that he built with his own hands. “It’s a great life,” he says, “and Margaret and I are going to stay put above the Arctic Circle where we’re happy. I figure I’m still good for painting until 95 or thereabouts.” This letter was originally published as “Minister of change” on May 19, 2006. Artist, pioneer, filmmaker, journalist, dog-musher, pilot, priest and Robert’s friend Bern Will Brown passed away at home on July 4, 2014 at the age of 94. He is buried at Colville Lake. Bern Will Brown’s latest book, End-of-Earth People: The Arctic Sahtu Dene, published March 29, 2014, is available at Amazon.com. An excellent video of Bern Will Brown, published May 22, 2012 by Inuvialuit Television, can be watched on YouTube here.   [fbcomments url=”http://clicks.robertgenn.com/bern-will-brown.php”]  Featured Workshop: Donald Jurney