You are at:Home»Letters»Something about Bill
By clearmarble April 25, 2014 Letters
Dear Artist, I’m laptopping you from the rotunda at the University of British Columbia’s Museum of Anthropology. In the centre is Bill Reid’s monumental cedar carving, The Raven and The First Men. According to Haida legend, the Raven found himself alone on Rose Spit beach on Haida Gwaii in the Queen Charlotte Islands of British Columbia. At his feet was a partly open clamshell with some small creatures peering from it. The Raven encouraged the creatures to climb out of the shell and join him on the beach. Hesitant at first, then curious, the creatures emerged, frolicked, and became the first Haida people. 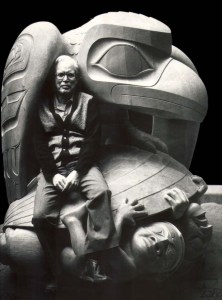 Love is in the details and in the arms of “the bringer of change” – the Raven. Bill Reid with “The Raven and The First Men,” 1980.

The sculpture’s yellow cedar is glowing in a golden patina of satin grain bathed in the afternoon’s ambient spring cloud breaks. Circling the carving, I’m struck by a work of organic perfection, symmetry, life force and tender, anthropomorphic and human storytelling. I feel a sense of completion and excellence. I remind myself to pocket the reminder. By the time Vancouver industrialist Walter Koerner commissioned The Raven And The First Men in 1973, Bill was a 53 year-old master carver, regarded and influential for his ability to connect the traditions and techniques of his First Nations artforms with a modern, enchanting message. The son of a European father and Haida mother, Bill apprenticed early in carving and silversmithing under his maternal grandfather, Charles Gladstone, the nephew of 19th-century Haida artist Charles Edenshaw. Edenshaw’s carvings had originally inspired Bill years earlier to make a miniature boxwood carving depicting the legend of the Raven. I remember Dad telling me a story about Bill. One evening while they visited, Bill talked about his struggles with perfectionism when working as a broadcaster for the CBC. He told Dad that flubbing a word on the radio was a flaw to the entire sentence and, thusly, the entire broadcast was compromised. From exquisite miniatures to monumentally large works, Bill’s sense seems to have been that love is in the details. 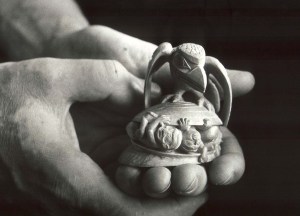 Bill Reid holding his carving, “The Raven Discovering Mankind in a Clamshell,” 1970, which was inspired by the carvings of his Great Uncle, Charles Edenshaw. Photo by Ulli Steltzer

In the fall of 1978, Bill, along with assistants George Norris and Guujaaw (Gary Edenshaw), George Rammell, Jim Hart and Reg Davidson, got to work roughing out shapes into a 4 and a half tonne, 8 x 8 x 7 foot carving block of yellow cedar comprised of 106 fine grain beams that had been air dried for nearly a year, and then kiln dried for a further two months. “I have a sort of waking nightmare: to get this thing just about completed, and the last day to discover one little part that doesn’t quite fit with the adjacent part”, said Bill of his design. “When you see it in its large scale, there’s an awful lot more of gesture and motion and so on. The beautiful, contained anticipation of action. There’s been this attempt to simulate life, to capture a dynamic moment.” 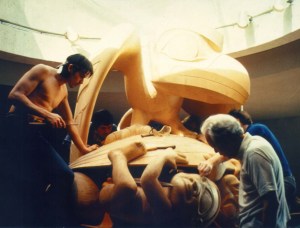 Sincerely, Sara PS: “Great art must be a living thing, or it is not art at all.” (Bill Reid) Esoterica: The Museum of Anthropology houses 573,000 ethnographic and archaeological objects. This includes carvings, masks, clothing, rattles, textiles, skins, jewellry, baskets, dishes, pipes, implements, sculptures, and fragments of totem poles from First Nations villages along British Columbia’s coast. “I have created the Raven in my own image over the years and insist that mine is the version of this personality that is correct,” said Bill. “It suits my own attitude toward the world and its people to believe that the Raven is this completely self-centred, uninvolved bringer of change, through inadvertence and accident, and so on. It’s a version of the Raven myth for today, not for the time when it was created.” Bill Reid died of Parkinson’s disease at the age of 78. Paddled by friends and family, his ashes were carried in Bill’s own carved cedar canoe on a two-day journey along the Pacific coast to Tanu Island in Haida Gwaii, to the site of his mother’s village. Bill’s magnificent canoe Lootaas, or Wave Eater, is also on display at the museum.   [fbcomments url=”http://clicks.robertgenn.com/bill-reid.php”]  Featured Workshop: Sharon Rusch Shaver