You are at:Home»Books»Childe Hassam: Impressionist in the West
By Sam Kaczur March 21, 2015 Biography, Books, Impressionism, Landscape 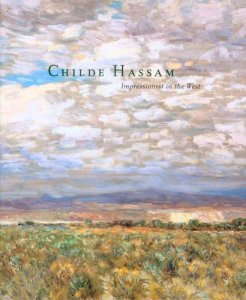 
The renowned American Impressionist Childe Hassam built his reputation on light-filled images depicting the streets of New York and New England’s coastal resorts. He was also known as a consummate traveler who delighted in discovering and painting new scenes and unfamiliar landscapes. In 1904 and 1908, Hassam traveled west, visiting Oregon and the surrounding region. He was captivated by the beauty of the Northwest landscape: its rocky coast, lush valleys, forested mountains, and stark high deserts. During his sojourns in the West, he painted at least 60 images, ranging from portraits and still lifes to landscapes and seascapes in oil, watercolor, and pastel. Childe Hassam: Impressionist in the West explores this significant, but little known, body of work in the context of the artist’s entire oeuvre and larger developments in modern art at the turn of the century. Richly illustrated, it investigates how Hassam’s images of the West mirror a number of his personal and professional concerns; provides insights into technical aspects of his work, which he tended to adapt to the subject and circumstances at hand; and looks at how the West appealed to his desire to create an art that was purely American in both content and style. Childe Hassam: Impressionist in the West offers a lucid and in-depth look at this intriguing interlude in Hassam’s career and the remarkable works that resulted.