You are at:Home»Books»De Kooning: A Retrospective
By Sam Kaczur March 20, 2015 Biography, Books, History 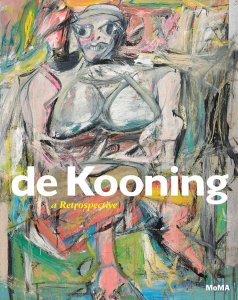 
Willem de Kooning was born in Rotterdam, The Netherlands in 1904, and moved to the United States in 1926. His early figurative painting slowly gained attention, and his black-and-white abstractions of the late 1940s made him a leader among the New York Abstract Expressionists; but the early 1950s Woman paintings made him famous for the violence of their depiction. De Kooning moved to Long Island in 1963, working in both abstract and figurative styles through the 1980s. He died in 1997.

“This book is the catalog for the great, albeit belated, retrospective currently held at Moma, supervised by one of the best museum curators in the US, John Elderfield. The illustrations are numerous and of a very good quality. Practically all the greatest masterpieces are present… and also traces some previously neglected sources that show how much the artist was translating the mood of his time on the canvas.” — reviewed by Reich Claude.