You are at:Home»Books»Defiant Spirits: The Modernist Revolution of the Group of Seven
By Sam Kaczur March 13, 2015 Books, History, Landscape, Painting, Plein air 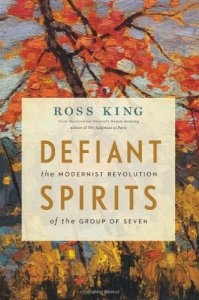 
Beginning in 1912, Defiant Spirits traces the artistic development of Tom Thomson and the future members of the Group of Seven, Franklin Carmichael, Lawren Harris, A. Y. Jackson, Franz Johnston, Arthur Lismer, J. E. H. MacDonald, and Frederick Varley, over a dozen years in Canadian history. Working in an eclectic and sometimes controversial blend of modernist styles, they produced what an English critic celebrated in the 1920s as the “most vital group of paintings” of the 20th century. Inspired by Cézanne, Van Gogh and other modernist artists, they tried to interpret the Ontario landscape in light of the strategies of the international avant-garde. Based after 1914 in the purpose-built Studio Building for Canadian Art, the young artists embarked on what Lawren Harris called “an all-engrossing adventure”: travelling north into the Canadian Shield and forging a style of painting appropriate to what they regarded as the unique features of Canada’s northern landscape.

“A wonderfully written historic review of Canadian art. Many surprises are waiting too, even for those well read on the Group of 7, placing other famous people and events in the time of these artists. I even found the grandfather of one of my schoolgirl friends. The areas in which they painted are iconic, poignant, blood-stirringly Canadian.” — reviewed by Celeste Varley.