You are at:Home»Books»The Gift: Creativity and the Artist in the Modern World
By Sam Kaczur March 15, 2015 Books, Business, Creativity, Philosophy 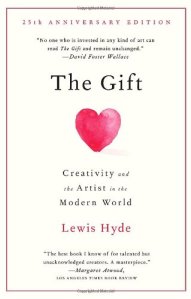 
By now a modern classic, The Gift is a brilliantly orchestrated defense of the value of creativity and of its importance in a culture increasingly governed by money and overrun with commodities. Widely available again after twenty-five years, this book is even more necessary today than when it first appeared. An illuminating and transformative book, and completely original in its view of the world, The Gift is cherished by artists, writers, musicians, and thinkers. It is in itself a gift to all who discover the classic wisdom found in its pages.

“His telling of the real establishment of capitalism–that begin with Martin Luther rather than Adam Smith, and the concomitant destruction of charitable customs in Western nations provide a far more cogent explanation of both the moral bankruptcy and the actual bankruptcy of globalism than I’ve heard in more than one hundred hours of NPR news stories.” — reviewed by Michael Tiemann.