You are at:Home»Letters»Breakthrough
By ShawnA September 2, 2016 Letters

In post-war Belgrade, Marina Abramovic’s parents were war heroes, having fought against the Nazis with the Yugoslav partisans and been rewarded with positions in the Communist party. Marina’s father was part of Marshal Tito’s elite guard, her mother director of the Museum of Art and Revolution. Her family of four lived in a larger-than-usual apartment and Marina had few responsibilities other than to do well in school. 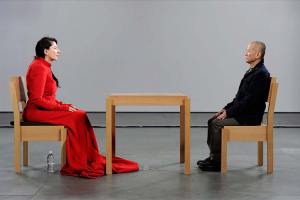 The Artist is Present

In spite of her privileges, Marina describes her childhood as lonely and oppressive under the religious orthodoxy of her grandmother and her parents’ marital unhappiness. Though a controlling disciplinarian, her mother worshipped art and so by the time Marina was six, she had retreated to her own private spaces to paint. She designed her bedroom and studio as minimalist sanctuaries with a bed, chair, table and easel.

When she was fourteen, Marina asked her father for a set of oils. He obliged and arranged for a painting lesson from an old colleague — an abstract-landscape painter named Filo Filipovic. In the lesson, Filo cut a piece of canvas and spread it with glue, sand, and red and yellow paint. “This is a sunset,” he told Marina while lighting the canvas on fire and letting it flame out. Marina pinned the charred sunset to her wall, went on vacation with her family and when she returned, the summer sun had disintegrated it into a pile of ash on the floor. “The process was more important than the result,” she later wrote, “just as the performance means more to me than the object.” 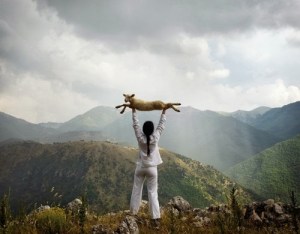 One day, while sky gazing, twelve military jets flew overhead, dragging a trail of white lines behind them. Marina lay still, watching the contrails dissipate and the blue of the sky reappear. “All at once it occurred to me — why paint? Why should I limit myself to two dimensions when I could make art from anything at all: fire, water, the human body? Anything!”

At the Academy of Fine Arts in Belgrade, she was taught to paint nudes, still life, portraits and landscapes. At 19, she made what she calls a “breakthrough painting” — a small picture titled Three Secrets, depicting three pieces of coloured fabric in red, green and white draped over three objects. “The picture felt important to me because it made the viewer a participant in the artistic experience. It demanded that imagination take place.” 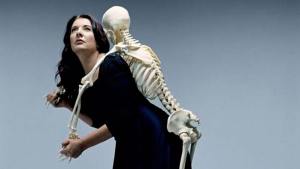 “I believe so much in the power of performance I don’t want to convince people. I want them to experience it and come away convinced on their own.” (Marina Abramovic)

PS: “There was something like a click in my mind — I realized that being an artist meant having immense freedom to make work from anything, or nothing. If I wanted to create something from dust or rubbish, I could do it. It was an unbelievably liberating feeling, especially for someone coming from a home where there was almost no freedom.” (Marina Abramovic)

Esoterica: As part of a major retrospective in 2010, Marina Abramovic performed The Artist Is Present in the Atrium of New York’s Museum of Modern Art. Each day for two and-a-half months, Marina sat in an armless, wooden chair, inviting audience members to take turns sitting across from her to make eye contact without touching or speaking. Within days of the opening, a line had formed outside the museum, with most visitors sitting with Marina for less than five minutes. By the end, she’d wordlessly re-connected with her former partner Ulay in a surprise visit, and celebrities including Lou Reed, Bjork, Sharon Stone and Lady Gaga had cut the line. On the last day, a participant vomited and another tried to disrobe. Tensions among those still waiting were heated and viewers reconciled that this was also part of the spectacle. After a total of 736.5 hours, Marina had sat with 1545 visitors, many who’d broken into tears. The Artist is Present attracted more than 850,000 visitors — a MoMA attendance record — and spawned a Facebook support group and a blog: “Marina Abramovic Made Me Cry.” An Italian photographer published a book and had an exhibition of participant portraits. Now, there’s a video game about it for Marina’s new, younger audience. “Theatre is fake: The knife is not real, the blood is not real, and the emotions are not real. Performance is just the opposite: the knife is real, the blood is real, and the emotions are real.” (Marina Abramovic)

You can get Marina Abramovic’s memoir, Walk Through Walls, here.