You are at:Home»Letters»Bush leagues
By clearmarble April 11, 2014 Letters
Dear Artist, Not being in the habit of making comments on international affairs, I asked my American friend Elmer Waite what he thought of former U.S. President George W. Bush’s portrait paintings of world leaders. “Everyone,” said Elmer, “no matter how exalted or humble, has a right to the humility that comes with trying to paint portraits.” 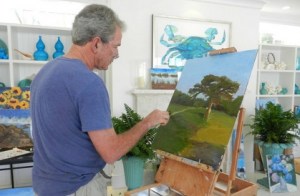 George at work in his blue studio

Looking at some of the collection currently on show at the George W. Bush Presidential Library and Museum in Dallas, Texas, I couldn’t help but notice our Canadian Prime Minister Stephen Harper. To my eyes, Bush’s rendition is a dead ringer for the guy who rents us canoes on the Yukon river. To his credit, George tried hard for the niceness of the Harper smile, but in real life Harper’s is a forced little one that happens more toward the outer ends of his lips and nearer to elections. Bush missed that completely. 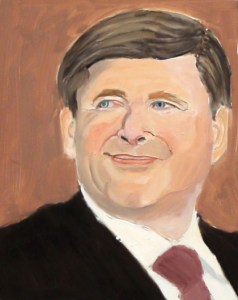 Portraiture is a difficult business. Bush might have benefited from pointers from any of the several hundred professional U.S. portraitists who, I’m sure, would have put down what they were doing if they knew who was calling. Pointers might include: How to get the spaces between facial features and allot proportions. The high importance of silhouette in getting a likeness. The value of soft and hard edges in portraits. How to use moderate caricature in serious portraiture. What to do about teeth. The pitfalls of working from photos, etc. Feeling bolder about mentioning this stuff, I have to say that I also never discourage anyone, no matter how important, from getting started. The real payoff is in the doing, as Winston Churchill noted in his brief but insightful book, Painting as a Pastime. Churchill took up painting in 1914 and continued through wars and political ups and downs until his death in 1965. Bush has only been at his easel since leaving the Oval Office. If George happens to be reading this, I suggest it might be an idea to do some relaxed and more casual sketches–perhaps a hundred or two. Good luck. You never know. 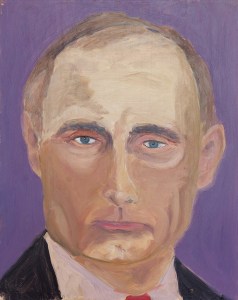 Best regards, Robert PS: “I wanted to make sure the last chapters of my life were full, and painting, it turns out, has helped occupy not only space but opened my mind.” (George W. Bush) Esoterica: “A portrait,” said the great portraitist John Singer Sargent, “is a picture of a person with something wrong with the mouth.” The area between the nose and the chin, the subject of kissing and the vehicle for speech, is perhaps even more known and set upon than the eyes. The mouth is also riddled with a complex interweaving of folds, curves, flats and lost-and-found edges. These nuances are needed by a perceptive person who might try to understand human nature. While loaded with painterly conventions, these mouthy nuances are the keys to personality. It’s easy to be an authority on the mouth, but the darn things are difficult to paint. The mouth is where the portrait painter finds his true humility.   [fbcomments url=”http://clicks.robertgenn.com/bush-leagues.php”]  Featured Workshop: Caroline Homes Nuckolls