You are at:Home»Letters»Caricature
By ShawnA October 31, 2017 Letters

In 1926 a young man by the name of Al Hirschfeld sketched a caricature of an actor on a theatre program while attending a New York performance. A friend convinced him to copy it onto a clean sheet of paper and submit it to a newspaper. Thus was born one of the great caricaturists — more than 7,000 published drawings and a career that lasted until his death at age 99 in 2003. Hirschfeld, who studied art in Paris and New York, had noted how sunlight bleached out colour and turned people into what he called “walking line drawings.” He later recalled how he became “enchanted with line” and began to use a unique style of simple, flowing lines to capture a personality or a performance. 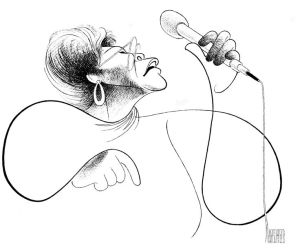 Hirschfeld’s method of working was to “find” the essential characteristics of a face, body language or gesture by trial and error with a pencil. Only when he thought it to be right did he finish in ink. It’s amazing, when you think of it — you can pick a familiar face out of a crowd, even after many years. Something distinguishes every face — it’s actually surprising there aren’t more look-alikes. The point is, it’s often difficult to distinguish just what that difference is. Hirschfeld knew that his job was to find that elusive something — simply, directly. 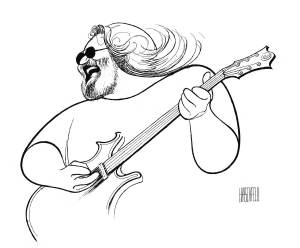 The system of caricature is to take prominent, unique characteristics and emphasize them. There’s a valuable tip for fine artists that lies in this process. Artists ought to look at their subject matter and attempt to extract a greater truth from what is seen. Beauty more beautiful, colour more colourful, gesture more gestural, elegance more elegant, solidity more solid, drama more dramatic. A wonky building can be made more wonky, a struggling tree more overwhelmed with struggle, a sad-faced person more excruciatingly sad.

Marquee lights across Broadway dimmed in Hirschfeld’s memory after word spread that he had died in his sleep. Shortly afterward, the Martin Beck Theatre on 45th Street was renamed the Al Hirschfeld Theatre. You can see his caricature of himself in lights on the marquee. 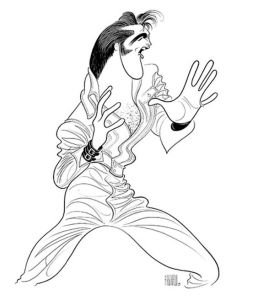 Esoterica: When his daughter Nina was born in 1945 he secretly wove her name into a few drawings as a celebration of her birth. After a while the public demanded that he keep it up, and he did. Many drawings have “Nina” buried in a curl of hair, the fold of a dress, the crook of an arm. Al Hirschfeld discovered it, and you can profit by it if you choose — the public eats up insider personality indulgences.

This letter was originally published as “Caricature” on March 12, 2004. 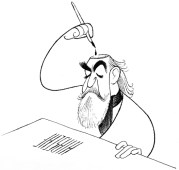 “You learn your limitations and then you try to work within them.” (Al Hirschfeld)