You are at:Home»Letters»Contradiction
By ShawnA April 28, 2015 Letters

At my easel this morning I realized that the way I’m working right now contradicts the way I was doing it a couple of weeks ago. Even in the literature it seems that eminent instructors and much-published writers have widely ranging opinions and methodology when it comes to the making of art. There seems to be more than one way to Rome. 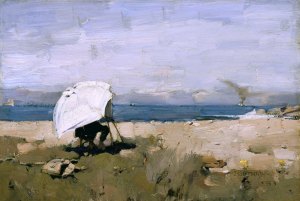 There’s no universal way to prime a canvas, lay down a wash, frame a painting, or get inspired. As well as the findings and experience of others, our own particular spin is based on what we did and learned before. It’s like those five blind guys feeling various parts of an elephant and trying to describe the beast. Would we really want it any other way?

In art, contradiction is a principle.

When the penny drops that your way is the right way (providing the results will physically hold up), the Magic Kingdom opens its doors. Here are a few of the principles: 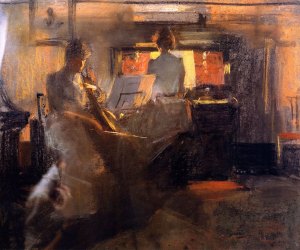 Choose your influences, mentors and instructors carefully. Having lots of books at hand gives you an overview. It may still allow you to run off with the boy next door.

Be honest with your true self. “Know thyself” is inscribed in stone at the Delphic Oracle. Maintain your personal dignity by not suffering fools, and don’t participate in what you consider a sham. Think it out and you’ll be able to live with it, even if it’s contradictory to what others are doing.

Test the systems. “Hands on” lets you know whether you can get your mind and abilities around your dreams. We think more inventively and originally when we’re up to our elbows in the muck of our passion. 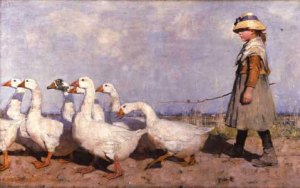 PS: “I went to the library. They gave you books for nothing. You had to bring them back, but when you did, they let you take others.” (Barbara Cohen)

Esoterica: George Santayana (1863-1952), who noted that England was a paradise of individuality, eccentricity, heresy, anomalies, hobbies and humours, said “Even our world is a contradiction of what it is trying to be.”

This letter was originally published as “Contradiction” on August 1, 2000.

“Interest in the changing seasons is a much happier state of mind than being hopelessly in love with spring.” (George Santayana)

They Call it Civilization