You are at:Home»Letters»On Coole Lake
By clearmarble May 18, 2001 Letters
Dear Artist, Her name is indeed Colleen, her friend is Emmet; a horse of a dog not much given to saying anything, which is unusual for the Irish, but he is at least fluent in drool. Colleen and I are painting at Coole Lake. In the misty off-skip, swans silently glide. The wood that comes down is not far off, but from here it appears distant, the green bushes are all in blue-purple, accepting the atmosphere and the swirling insects between. There is no definition at the edge. It’s a job for watercolor, which Colleen goes at with a big goat-hair. Her puddle moves down her Whatman. In watercolor, what is, is. It’s carefully chosen by looking for a while at the condition, then a commitment to a complexity of Winsor blue, gamboge, burnt sienna, alizarin. With acrylic I’m too used to guessing wrong and adjusting later. There’s a discipline in watercolor. Center of interest? — she’s already prepared for it with resist — swans — cursory yet expressive — in the right place. I labor on with my stiff medium. Commit and correct. What you lose on the straights you make up for on the corners. Hey, nobody ever said you have to paint acrylics opaque. I re-prime a canvas in white with brushstrokes showing. After it’s dry the medium-filled washes are done by the leprechauns. “What have I been doing?” I ask myself quietly, checking Colleen’s palette for the second time. I’m using a big fat Robert Simmons Expression round. A pair of swans swims close by. A hare comes down to the lake’s edge and takes a drink. Emmet, spread out like a bone-yard, looks over and groans. He knows he can’t catch her. 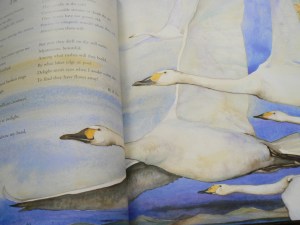 “The Wild Swans at Coole”
illustration by Jackie Morris