You are at:Home»Letters»Courage in colour
By ShawnA June 30, 2017 Letters

At the National Gallery of Victoria here in Melbourne, throngs of sticky beaks move in mobs to inspect the largest collection of van Goghs to ever travel to Australia. The Seasons presents a four-sectioned survey of Vincent’s landscapes from the perspective of time of year — a pillar in his paintings and explored in his ebullient letters to his brother and best friend, Theo. Caressed by the Melbourne Symphony’s on-site Vivaldi and audio guide recordings of Vincent’s recited letters, visitors clog the galleries from open to close to channel his myth and scale, catching the Rhone breezes of Arles and taking selfies with a pair of satisfyingly on-style Cypresses. 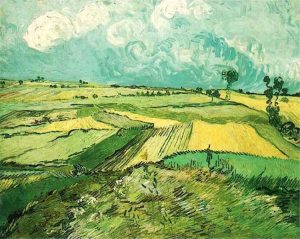 In his letters, Vincent seems to begin his paintings first in words, describing his summer in Arles as “the opposition of blues against an element of orange in the golden bronze of the wheat.” Colours and their adjectives, settings and conditions tumble with affection and define the allegories of Vincent’s imagination. As if to make it tangible for Theo and for himself, he ordered his new, sun-baked world by life cycle and crop cycle, his letters as much his painted language as the daubs and scumbles that, 130 years later, still invite the long stare. 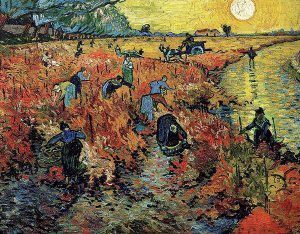 Historians uphold that Vincent sold but one painting in his lifetime; The Red Vinyards at Arles, an oil on primed burlap that he painted in the Fall of 1888 and sent to Brussels for exhibition in 1890. Anna Boch, a Belgian impressionist and art collector, bought it for a respectable 400 francs. Anna’s brother, Eugène was a friend of Vincent’s, having sat for him for the portrait, Le Peintre aux Étoiles. Eventually, Vinyards landed in the collection of a famous Russian and was later nationalized by the Bolsheviks along with other treasures. Today, it hangs in the Pushkin Museum of Fine Arts in Moscow. 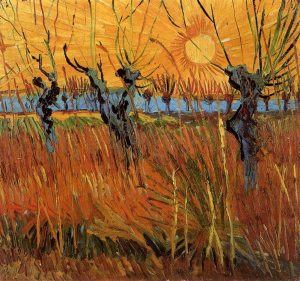 Esoterica: Vincent van Gogh was born in Zundert, Netherlands on March 30, 1853 to an upper middle class family and from a long line of theologians and art dealers. After failing as an art dealer and minister, Vincent went to Brussels at Theo’s prodding to study life drawing and watercolour and then roamed, painting for periods in Etten, Renthe, The Hague, Nuenen, Antwerp and eventually Paris. After discovering Japanese woodblocks and collecting and cataloguing thousands of prints from art magazines, Vincent moved out of the Montmartre studio he shared with Theo and went south, first to Arles and later to Saint-Rémy and Auvers-sur-Oise. There, in fragile mental health, in poverty and suffering from malnutrition, insomnia, alcoholism and with bouts in an asylum, Vincent set into motion the most prolific and intense period of painting of his life, before ending it with a revolver in 1890 at the age of 37. In a little more than a decade, he’d produced an estimated 2,100 works including 860 oil paintings, most of them in the last two years. His works are now considered to be part of the foundations of modern art. “What would life be if we had no courage to attempt anything?” he wrote. “I am seeking. I am striving, I am in it with all my heart.”

“The fisherman knows that the sea is dangerous and the storm terrible, but they have never found these dangers sufficient reasons for staying ashore.” (Vincent van Gogh)