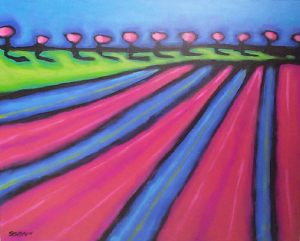 One of the “Lavender Fields” paintings which Sara produced using the back of a food cooler when she and Richard Thompson were travelling in southern France.

My daughter, Sara, was thirteen when she walked into my studio and announced she was going to be a painter. I knew she was serious. As long as I can remember she was a child who stuck to her plans. Where did all this character come from? It must be from her mother. I was surprised. I kind of thought it would be James or David who chose to pursue art. But Sara pre-empted them, and James happily went into film and David into music. No accountants or lawyers here.

I, too, became serious about Sara’s decision. Having offspring in the same field can be difficult at the best of times. I knew firsthand of father-child creative situations in which unhealthy conditions arose. I had to tread lightly and carefully. I knew it would be wrong to give her too much direction and fatherly advice. I also knew that I was going to have to stand by and be her best friend and mentor — if and when I was asked. This kid had a unique spirit and definitely a mind of her own. She wasn’t about to clone her dad’s stuff. She wanted her own direction, her own career, her own life. I wasn’t about to tell her how or what to paint. Even when she was a toddler she could shut the door of her bedroom and make marvellous things. She didn’t even need to show them to anyone. Just making stuff was enough. 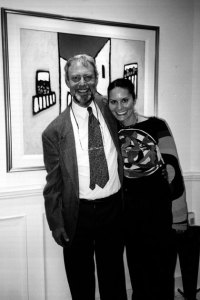 In high school she was at the top of her art class. She edited the school magazine and did art for everything and everyone. She gave her stuff to charities. When it came time for art school I was glad she chose Queens University, in Kingston, Ontario — well away from home and under the eye of other artists, other influences. University art school was everything I had hoped. I was glad to hear that they were soon all at each other’s throats. During her Christmas breaks and every summer Sara came home to western Canada and worked like a troll in my secondary studio. The building was redundant at the time and I made it a point not to go there too often. Between second and third year she had her first solo show. She was 20. She sold more than 70 paintings in a week — a fact that she dared not tell her tenured profs back at Queens. At graduation she couldn’t get out of there fast enough. These days, Sara goes into her former classrooms and inspires others, tells them about the real world.

Sara and I made up our minds to have different galleries, different collectors. She would go her way and I would go mine, but I would always be there if needed. We were anxious to avoid the stigma of nepotism. Then one day we decided to try a two-person show. Outrageous! We both loved it. Our work, our lifestyles, seemed to complement one another’s. Her work: imaginative, whimsical, often goofy; mine, well, you know, conservative. While passing through a small town Sara and I went into a thrift shop. She emerged with several used dress patterns out of which she was to build a series of paintings that depict some of the softer parts of human anatomy. 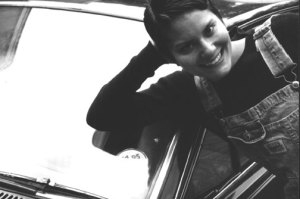 Since then we have had at least six two-person shows. It’s introduced me to her young fans and lit up my life. She still has her avant-garde galleries, but we mix them up and it’s been a fun trip. And speaking of trips Sara and I have taken a few of those together — as co-artists of choice. Europe, Mexico, across Canada — over the last two summers Sara and I sailed the length of the Mackenzie River — 900 miles in our specially built floating studio. One of us paints in the bow while the other runs the boat. Talk about joy. 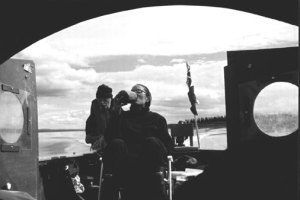 Sara and myself on the Mackenzie River in northern Canada. We covered over 800 miles in our floating studio and painted several dozen paintings each over two summers.

This year Sara turns thirty. This year she will be making it official with Richard Thompson. They met while at Queens. He’s the brains behind the Theo Digital Gallery System and the publisher of my twice-weekly email letter. Nepotism is okay provided you keep it in the family. Richard and Sara recently took a year to wander Europe, painting, getting material, and publishing an online art travelogue called Saraphina Mosey which continues to attract 400 visitors a day. Sara, now in her own lofts with Richard, paints every day and maintains a dozen galleries.

If there was anything she learned from her old dad it would be her capability of producing a decent volume of work. She’s probably the fastest brush in the west — long since usurping my former title. She’s painted and found collectors worldwide. She’s come a long way from the little girl who came into my studio and said, “Daddy, I thought you would like to know I’m going to be an artist, like you.” 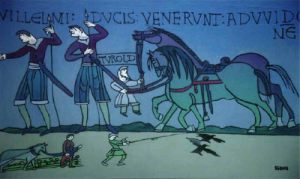 One of a series of paintings inspired by the Bayeux Tapestry in Northern France.

(RG note) This article is courtesy of Art Avenue Magazine, a publication of the Federation of Canadian Artists. The FCA is a Canada-wide arts organization with a membership of over 2000. The FCA holds worldwide competitions, gives seminars and workshops and maintains an art gallery. The website is at http://www.artists.ca/

More of Sara Genn’s work can be seen at http://www.saraphina.com