You are at:Home»Letters»Opportunities for design
By clearmarble July 1, 2014 Letters
Dear Artist, Back in mediaeval times, I was conducting a workshop and pontificating about design. A man put his hand up and said, “When you use the word ‘design,’ I have no idea what you’re talking about. What are you talking about?” I realized right then that, for many artists, the kind of design I was talking about wasn’t covered in their bibles. 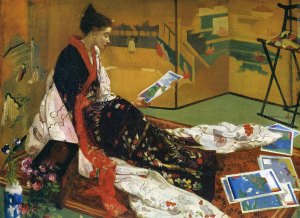 “Caprice in Purple and Gold: The Gold Screen”
oil on wood, 19.75 x 27 inches
by James Abbott McNeill Whistler, 1864
“Nature is very rarely right, to such an extent even, that it might almost be said that nature is usually wrong.” — Whistler

Yesterday, while easelling along and looking for design opportunities, I tried to figure out how I might have brought that fellow into the fold. I always have this uncomfortable feeling I might have given false witness to artists I knew in the past. “Look at any object,” I could have told him, “a car, a chair, a vacuum cleaner, the pope’s nose.” With a little study and quiet thought, he would be able to distinguish good design from bad. In my books, great artists are often those who can transfer their finer sense of design to their art. While design ideas may be highly personal and unique, here are a few specifics worth looking out for: Continuum: Continuity is seen from one element to another. Harmony: Shapes echo and complement one another. Functionality: How does it work? Form follows function. Elegance: Curves attract, amuse, enthrall, seduce. Implication: Elements are suggestive or metaphoric. Concentricity: Elements circulate, extend and focus. Control: The viewer’s eye does what you want it to do. Strength: Forms are solid, committed, authoritative. Personality: Your design motifs can be yours alone. It’s not just the stuff you’re looking at, or the magical dreams of your head, it’s what you do with your material. “Nature,” said James Abbott McNeill Whistler, “is usually wrong.” What he meant was that in order to be art, things need to be redesigned. In many cases, stuff needs to be moved, separated, lined up, brought into agreement or in some way justified as a thing of its own–a troublesome leap of faith for many. Fact is, there’s gotta be meaning and purpose. In an even more pagan century, I too was sitting at the back of the room wondering what design was all about. My instructor, the late, great Strother McMinn, came by, looked at what I was doing, and said, “Not more bloody woolly stuff! Stop drawing potatoes, Genn.” It was about that time I began to see the light. 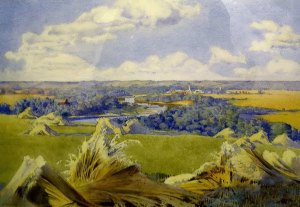 Best regards, Robert PS: “The science of design is the source and essence of painting, sculpture, architecture. Sometimes it seems to me that all the works of the human brain and hand are either design itself or a branch of that art.” (Michelangelo) Esoterica: There are two main approaches to design. One is the calculated planning that builds preconceived design into work from the very beginning. The other is to leave your options open to be able to modify and improve design as you go along. This requires a constant and critical eye. It’s part of my most valuable question, “What could be?” Look at half-finished work as a puzzle with many possible outcomes. The great printmaker Walter J. Phillips, said, “Design must be very carefully considered, and plenty of time and thought given to its construction.” The downside, if you don’t, is the “bloody woolly stuff,” mentioned above. “True artists,” said William Shipley, “are people who find bad design physically nauseating.” This letter was originally published as “Design opportunities” on November 28, 2006.   [fbcomments url=”http://clicks.robertgenn.com/design.php”]   Featured Workshop: Art Unraveled