You are at:Home»Letters»Destiny
By ShawnA December 30, 2016 Letters

By 1880, the crimes of twenty-five year-old Australian outlaw Ned Kelly had escalated from bank robbing and distributing funds to the poor to gunfights and police killings. He and his gang of bushrangers — escaped convicts with the survival skills to hide in the outback — roamed rural Victoria, both terrorizing and inspiring settlers. At the climax of their rampage, Kelly’s myth went supernova when he made a suit of armour out of iron plough parts and wore it to what would be his last siege. Still, Ned was shot by police, captured and eventually hanged. 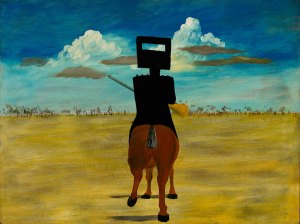 In 1942, twenty-five year-old painter Sidney Nolan was living at an artist’s colony in suburban Melbourne. Heide, as the compound was known, was a sprawling former dairy farm now home to art collectors John and Sunday Reed. The Reeds and their artist guests lived together in an open tangle of creative encouragement and love affairs, growing veggies, improving the property and dreaming together of developing a unique Australian modernism. Sidney, for his part, wanted to express in painting his struggle to fit into the world. 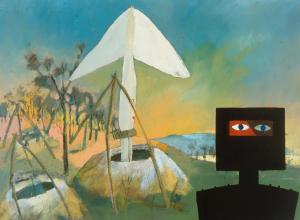 The residents of Heide worked on an avant garde literary magazine called Angry Penguins and borrowed the name for their new art movement. The magazine’s editor, Max Harris, invented a poet alter ego for a little creative elbow room. “It made me take the risk of putting against the Australian bush an utterly strange object,” Sidney said of Max’s “hoax” poems, which streamed with abstract imagery. Sidney began what would become a lifelong series of historical paintings recounting Ned’s outlaw misadventures in the outback. In his devotion to modernism, he painted Ned’s homemade armour as a silhouetted, cubist form dotted like an alien with primitive eyeballs. With repetition and scale, Sidney and his Ned paintings were elevated to a national symbol of irreverent, destiny-chasing individualism. 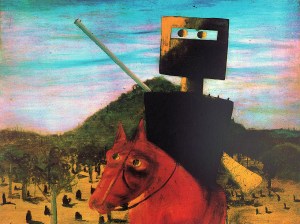 “Kelly and Red Horse”
enamel on composition board
by Sidney Nolan

PS: “Many of my best subjects have resulted from looking back on past journeys.” (Sidney Nolan)

Esoterica: In 1981, the elderly Reeds gave their Heide compound to the Victoria state government. By then, they’d built on the grounds a second, ultra-modern concrete home and had plans for a separate, devoted gallery space. They kept the vegetable garden growing, left the library for future generations and had speckled the landscape with modernist sculptures. Heide nestles like a fantasy into a park-like oasis of shady eucalyptus stands and hilly sightlines. “Painting is an extension of man’s means of communication. As such, it’s pure, difficult, and wonderful.” (Sidney Nolan) 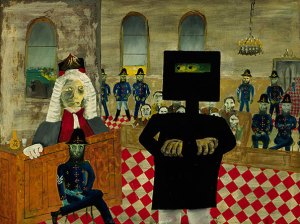 “The Trial” 1947
enamel on composition board
by Sidney Nolan

“The swung torch scatters seeds
In the umbelliferous dark
And a frog makes guttural comment
On the naked and trespassing
Nymph of the lake.
The symbols were evident,
Though on park-gates
The iron birds looked disapproval
With rusty invidious beaks.
Among the water-lilies
A splash — white foam in the dark!
And you lay sobbing then
Upon my trembling intuitive arm.” (Ern Mally, a.k.a Max Harris, editor of Angry Penguins Magazine, 1944)

Happy New Year from all of us at The Painter’s Keys. 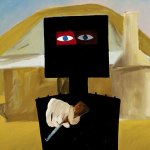 “Let us follow our destiny, ebb and flow. Whatever may happen, we master fortune by accepting it.” (Virgil)