I’m still in Toronto. Visiting a group show. Crowded. Abstract. Realism. Artbabble. Artspeak. I’m cruising edgemanship. Edges can be hard or soft. Softness promotes mystery and magic while a hard edge prepares the mind for precision and potential design energy. Soft is the impressionist’s choice. Big-soft is the abstractionist’s dream. Sometimes soft is simply necessary in order to de-focus.

Wet-into-wet in both watercolour and oil allows painterly transitions of elan and freshness. Happy accidents happen. Acrylic, with its fast drying blessing, may present some problems. In acrylic, softness can generally be achieved by overshooting, but more often than not edges have to be softened with the use of a fan blender or “scuzzed” with a lightly loaded stubby. Soft edges are often effectively accomplished with an intermediate tone.

How an edge is handled is generally determined by the texture of the pictorial element being described. Overly complex deciduous trees, for example, can be transitioned into the sky or other background with softened masses rather than going leaf by leaf.

Other edgemanship options include “halation” and edge lighting. Halation is an aura, sometimes of a different colour than the local tones. Trial and error is the main tool of discovery. Edge lighting and its partner “contraluz” — a Spanish term which means “against the light” add definition and separates pictorial or abstract elements. This device also provides for the “burning out” and “thinning” of elements which can be used for either increased realism or altered state. Furthermore, colour zones that are contrived with equal-intensity or nearly equal intensity colours — often opposites, or near opposites on the colour wheel — provide professional edgemanship of a high order.

“Fascinating,” says a tall, blond guy to his friend. He has his nose against a painting. He’s got it right, it’s fascination that we’re after. “Very interesting,” says the other. They’re following the edges.

PS: “Something’s happening here; What it is ain’t exactly clear.” (Buffalo Springfield, Stephen Stills, For What It’s Worth)

Esoterica: Another technique is to “harden” edges with dark lines or other definition. Often an emergency device to strengthen otherwise weak paintings, outlining can be a style-force in itself. Outlines build structure, tie elements together, and provide a pictorial unity that may not otherwise exist.

Edge a part of personality
by Linda Muttitt

As I reached the end of your notes on edge-personship, I realized that I exemplify those same things myself as I paint. Like those soft edges, some of me is soft and gentle with the painting, sometimes lost in where I am, or what to do… a kind of wide-lens blur that helps keep me open to possibilities of where to go once fully inside the painting. The other part of me is decisive and strongly present, demanding, determined, and usually clear about what’s next. These seem to me to be the hard edges — a kind of inner strength that provides direction and guides me through some of the harder parts of the painting, emotionally or physically manifested as I work.

One of the things you left out was the idea of edge absence — that is, edges can be lost and found again, or only implied. One of the most valuable devices is no edge at all, such as the dark hair of a woman against an equally dark background. Patterns, particularly satisfying or well-designed patterns, are almost always more useful than delineating edges and lines.

On edge — waiting for lightning
by Warren Criswell, AK, USA 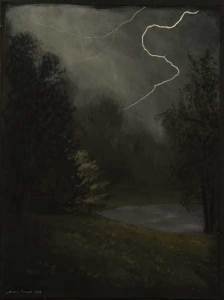 You mentioned the edge between complementary colors, but hard and soft edges are themselves also complementary. In any painting a hard edge is harder and a soft one softer in the presence of the other. One night recently at about 2 a.m. I had a chance to observe a thunderstorm from the back door of my studio. One terrific bolt of lightening out behind the pond had me frantically trying to sketch what I saw and waiting impatiently for the next strike. I saw hard edges in the closer trees and soft ones in the more distant ones, because of the rain. It’s that old trick of classical Chinese painting, the landscape always receding into the mist. Hard dark edges mean close up, soft faint edges mean far off, and often there’s a number of transitional planes between the extremes. But it’s never night in Chinese paintings. The trouble with those Chinese masters is that they learned how to do it and it froze into mannerism. They didn’t have to look at the world anymore. For a western painter I think “learning to paint” is probably the worst thing that can happen to an artist. We each have our own personal cutting edge, and once we slip back from it into some kind of complacency where experimentation and struggle are no longer necessary, we may as well hang it up.

Ode to the edge
by Karen Fitzgerald, NY, USA 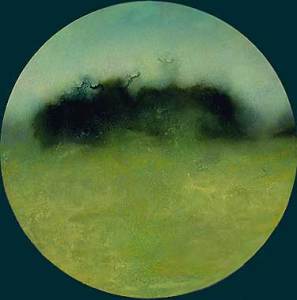 I wonder what will go out of the world when we stop considering edges. I’ve thought about them most of my mature artist life. I think about them so much when I’m painting that the thinking becomes the flow and I don’t recognize my insistence on boundary consideration anymore as that. I’m immersed in the atoms that gently undulate, forming their boundaries between matter; you and I, my skin and the oxygen in the air.

If our eyes were equipped for more miraculous sight, we’d see the smeared out transition from tree bark to oxygen molecules, from glass surface to water: not as a hard demarcation, but as it truly is. A condensed gathering of similar atoms that transitions to a less dense gathering, until, a denser area contains the other.

Parallel to these considerations of how matter is demarcated are those regarding the demarcation of consciousness. For so long most of us have considered each mind/body/soul a sealed container, with words and images as the way in or out. But in reality, I believe something else much more subtle is at work. Just as in the case of atoms gently jostling each other near edges, so consciousness also has sloppy edges. Edges like those infinitely fascinating iterations of chaos theory: the computer programs that visually play out the mathematical equations of dynamic, complex flow patterns. Or the photographs of flow that inspired some of us to seek the math underneath: a series of whorls sculpted into the inner realm of a tree trunk, or frozen in a pattern of hardening lava. Consciousness is hard at work in countless soft-edge circumstances, subtly blending self with others in ways we sometimes feel, sometimes “get,” and most times just sense in a frustrating realness that lacks graspable definition.

It’s long past noon, high time for an ode to the edge. I’m a traditional artist — revering visual evidence as a reflection of the radical thoughts moving through this ocean of consciousness we all swim in. Of course even more radical as a consideration for some conceptual folks is the idea that the visual evidence is no reflection at all, but residue of the real, the immutable world. Art really isn’t rocket science. It’s closer to a playground. Even at the microscopic level, gravity pulls us down the slides that feel hard edged, but our bodies and that play equipment have exchanged countless atoms: a few more minutes and the merging might go deeper.

Sailing on the edge
by Jan Zawadzki, ON, Canada

I was sailing the north shore of Georgian Bay. Battery life in portable electro solar gizmo limited to irritating things like storm clouds… not to mention lightning… evidence of which, now at the bottom of Georgian Bay, is demise of very expensive nylon sail now in melted plastic form around mast… anybody tells you lightning doesn’t strike twice in the same place is full of it. Impossible landscape… flat, tortured granite rock… 30,000 islands… azure clear waters… NO tourists. Much as I abhor the word ‘abstract’ this concept lends to description in this area.

Regarding Queen Street, mentioned in your recent letter, I had a studio on Queen/Spadina 30 years ago when it was a beginning arts community. No glitchy storefronts as now, memories of Yorkville in the heyday of the hippy thing now becoming a mirror image of Queen Street. The present serious arts thing is happening in Junction area of Toronto.

(RG note) The Queen Street experience is at Cutting edgers

Edges have a life of their own
by Dave Louis, Coventry, UK 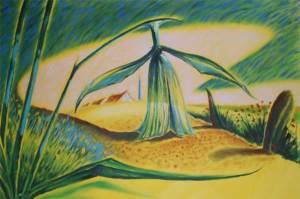 I had always tried to harmonize edges to underline form and vice versa. I have come to the conclusion though that edges have too much of a spirit of their own to dedicate solely to this coupling. Edges serve so many functions, and variations offer too many possibilities to be mastered totally, even within the context of a single picture. Edges have a life of their own. 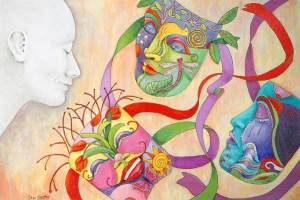 I became once again insecure in the style I have developed over the last five years. I outline my acrylic paintings with ink. I’ve grown accustomed to the “look.” I would be interested in an opinion from readers of a recent one of mine: “Unadorned.” Is it a “weak painting?” How could I have improved it? 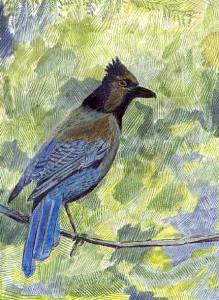 I live in a seaside town called Blyth in Northumberland, England. I’m an enthusiastic recipient of your letter and have always wanted a copy of your The Painter’s Keys book. I wrote to you about buying a copy and, as I don’t use a credit card, it was agreed that I could send an International Money Order. My bank informed me, however, that the charge for this would mean that I would end up paying more than twice the price of the book.

I couldn’t fathom how to get a copy, until I emailed my cousin Steve and his wife Debra in B.C., Canada, who very kindly agreed to buy me a copy and mail it over. I received it today and I am delighted. Just goes to show that if you want something a lot there is always a way. That philosophy can be applied to art too. If you really want to be an artist, then keep on trying and don’t give up. Don’t compare your progress to that of others, but do compare it to the work you were doing a year or so ago and you may get a pleasant surprise.

(RG note) Thank you to the Steves and Debras of this world. For those who don’t bother with plastic — or just don’t care to use it — please simply email your mailing address and we’ll get a copy of The Painter’s Keys in the mail right away. Many artists find that they get a great deal of value from this book. 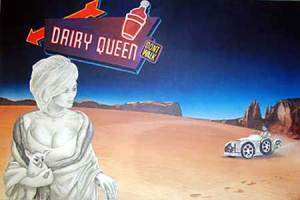