Multiple rooms draped in festive silks — red hearts and pink Valentinery were hung with images of naked people doing various things to themselves and one another. Some were impressionistic, wispy, understated — others were well-delineated and explicit. There were sanguine and chalk drawings, oils, acrylics, collage, found objects and ceramic items. Humorous and amusing crudities vied with the current and popular love affair with our bodily temples, rituals of the “Eternal Prostitutes,” and the general celebration of Gods and Goddesses. Some works attempted social consciousness, remarked on the exploitation of the body, cult of beauty, pervasiveness of advertising, presence of brutality, the triumph of form over substance. Penises were front and center. The show was well hung.

“I’d rather do it than look at others doing it,” a friend told me, falling into that uncertain bed midway between chastity and curiosity. While I was there matrons and young men prowled, looking as if this was serious stuff indeed. Overt arousal was out of place that day. I heard no shouts of, “Love that vulva!” No, there’s a peculiar thing that takes place in purple rooms such as these. Abstracted, sensual shapes seem curiously not enough — pushed under the sheets by the in-your-face, let-it-all-hang-out school. Perhaps it’s the togetherness. Like group sex, perhaps these group shows don’t always come off as a celebration of the beauty, mystery, and the miracle of human intimacy. Another friend pointed out a marvelous bud-like ceramic. “I think if I discovered this in a regular art gallery,” she said, “I couldn’t live without it.”

PS: “I am for an art that is political-erotic-mystical, that does something more than sit on its ass in a museum.” (Claes Oldenburg)

Esoterica: Emily was not allowed in. Smiling docents suggested that my dog might be too “risky” and liable to knock something over. Embarrassed, she was obliged to be tied up outside. She has been a guest in hospitals, nursing homes, even active art-studios where she certainly knows her boundaries. Her species is one that is curiously free of prudery. Airedales have been known to do it openly in public places. Perhaps that’s what they were afraid of. 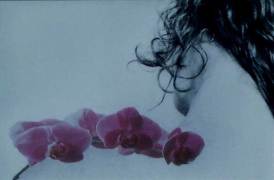 “Nothing new under the sun” by Jim cowan 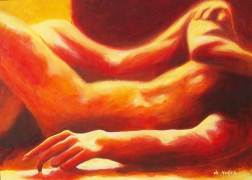 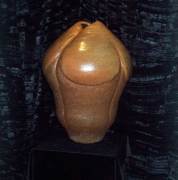 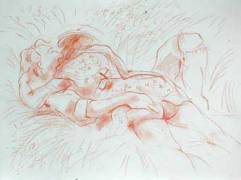 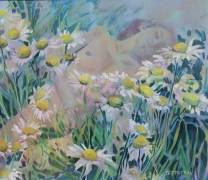 “In the garden”
by Deborah Putman

“A nod to Leonardo” by Yvonne Maximchuk 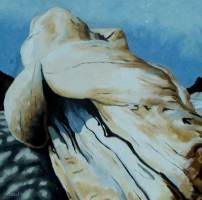 “Beside the ocean”
by Shawn Haukas 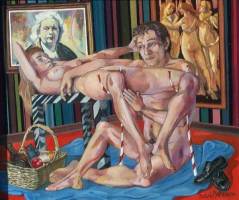 Insulted and embarrassed
by Martha Radcliff

I am insulted and embarrassed by your letter today. Morality in this country is at such a low level that I am afraid God will soon pass judgment on us. You have added to it and I am shocked. I have been enjoying your letters so much and am sorry to say that I now do not want to receive them any more. Please take me off your mailing list.

Your last letter was relegated to my company’s “Spam” mailbox due to its content. But that’s the first time it has happened so perhaps that’s a comment on your normally uplifting words.

Wafting in the air
by Kim Rody, Dallas, Texas, USA 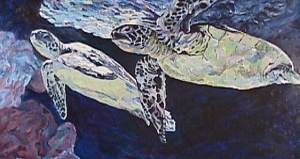 Erotica must be wafting in the air. I had two of my naked fish ladies chosen and exhibited in the first two legs of “nude nite”… first in Tampa, Florida, then Orlando. New Orleans is slated for April. The Orlando show is 300 pieces of art centered around the nude figure exhibited in an empty warehouse with food, cash bar and a DJ. They videotaped an interview of me (along with all the other artists) for their documentary. Art in the Tampa show included traditional nudes, painted, photographed, then the kinky new stuff including performance art and, of course, my naked fish ladies. Our rather large audience was also very subdued while considering the adult content surrounding us. 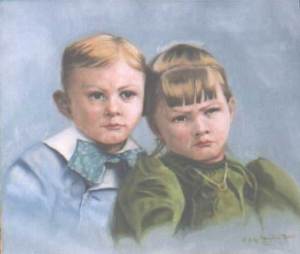 painting by B J Haugstad

I guess I can’t say I wasn’t curious. But then again, it doesn’t surprise me in an industry that really doesn’t understand the impact the visual image has on some one to glorify or damn. It isn’t my job to police anyone, but then again, I have the fortitude to say when enough is enough. Frankly this is enough. My creativity won’t be prostituted on everyday or mundane expressions. Like it or not, Art isn’t about the lowest common denominator. It transcends, and the artist is responsible for what he or she says. 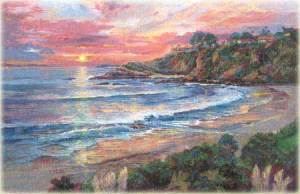 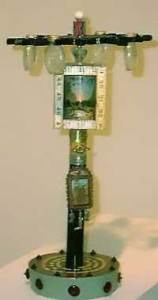 We need shows like this
by John Rocheleau, BC, Canada 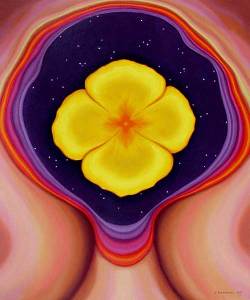 Recently, I showed some of my paintings in a high profile commercial gallery. They were up for 2 weeks. The gallery owner took them down at the request of two of his best clients, who explained to the gallery owner that these were in fact pornographic. I should have hung a mirror next to each painting. I also showed them in a coffee shop. There I received great comments, and requests from patrons not to remove them. I concluded that there are many people that appreciate sensuality in art, but you have to find the way to reach them. Gallery goers do not necessarily represent public taste in art, but they do dictate what is made available. We need more shows like this. If nothing else, it’s entertaining to watch some viewers squirm, and others celebrate the expression.

Beauty of love
by Sherry Preston 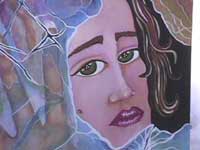 I was giggling at your letter today! Also, it was such a wonderful display of works by these artists. Most people are not used to seeing the taboo images displayed. That’s why it makes such a wonderful show — bringing out the reality of our human wants, needs and desires. People blush at images that show passion. When the clothing comes off they are open for the world to see! It goes back to the long line of thinkers that ‘SEX’ is not something to talk about. But without it we would not be here! We were given this passion as a gift to enjoy with another human being. The closeness of love, passion, intensity of emotions. We are actually taught to blush. It is such a human emotion. The passion of being the only person so close to another. That the emotions become entangled as one. Love is the key that keeps these emotions real. Yes you can have sex with anyone, but if you love them it means so very much more. It is a closeness of the hearts, to love someone you burn as one candle. I congratulate the artists who made this effort. 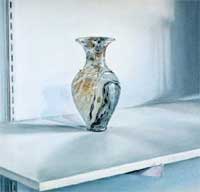 A student of mine sent your letter to me and I am delighted with it. To find an online community that seems to share so much of what we really go through as artists is excellent. What I find most interesting is this: If you had told me, back when I was in Art School, that 30 years later, I would still be discovering exciting new and fascinating areas to explore as a painter, I would not have believed you. The old adage that the more you know the more you find there is to know is certainly the most glaring truth I have experienced as an artist. It is also the most fun you can have with your clothes on, as they say.

I really enjoy drawing or painting the human form. It is God’s highest creation on Earth. I also refuse to believe that we are alone in this vast universe. Some day what art may do is give aliens an insight to our culture. We may explore the new frontiers, the sea, space, mind and heart but we must conquer the heart. Artists are the storytellers of heart and mind. In our short span we are the explorers that capture the moments of life that will remain for as long as our world survives. Each artist is no more important than the other, even the art of children is equal in heart. I hope for world peace so that all cultures may peacefully share their lives through the arts, even those that may arrive here from somewhere out of our future leaving their past. You may say that’s crazy, but it’s being open-minded that lends itself to new creations.

Value of the human figure
by Ingeborg Raymer 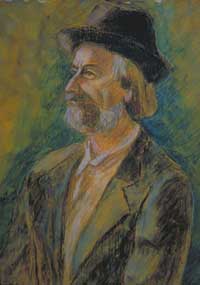 I have been drawing and/or painting nudes for more than 25 years. Not only did the discipline of life drawing increase my drawing skills immensely, but drawing both the face and the human figure became my favorite subject. I am so appalled at the rejection of my artwork by so many private & public galleries. “No frontal nudes, please”! I do not get “my kicks” out of seeing and drawing the human form as it actually takes a lot of concentration. When a gynecologist examines a woman, he does not get his kicks out of seeing and feeling that part of the body. Therefore, I do not understand a society that condones any form of unethical behavior — sexual or otherwise — which is so prudish about seeing a human body without conventional clothing. Let’s get out of the 19th century!

AIDS and actions that link us to each other
by Kelly Borsheim, Cedar Creek, Texas, USA 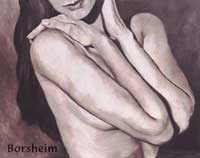 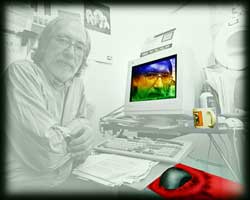 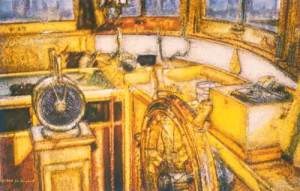