You are at:Home»Letters»Faith-based art-making
By clearmarble January 7, 2014 Letters
Dear Artist, A recent issue of the New Yorker Magazine had a cartoon titled “Faith-based cooking.” The example they gave was a faith-based tuna casserole. “I got the recipe from the internet,” says a frazzled woman holding up her dish. “We didn’t have any tuna so I used yesterday’s leftover Chinese takeout. It should still be okay.” 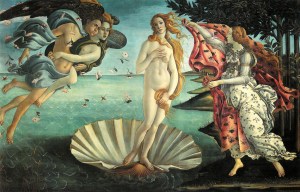 “The Birth of Venus”
tempera on panel
by Sandro Botticelli

The cartoon reminded me of a friend who painted only one painting in his entire life. He was a businessman — a very successful one — who told me he didn’t know anything about painting but that he had it in him to paint a magnificent one. I bought him everything he needed, including a giant canvas I primed for him. “I don’t actually know what I’m doing,” he admitted, “but I have faith I can do it and faith will be enough.” The painting, long since lost to posterity, was pretty bad on most levels. It was done after Botticelli’s except there were many more Venuses. It was so bad that ordinary people had trouble looking directly at it. It was so bad I don’t think a top notch New York art dealer could have got a bid on it. To be fair to my friend, when he was not making money he often travelled to the great art museums. He could talk authoritatively about Caravaggio, Daumier and David — three of his favourites. But when it came to the art of drawing or mixing a sophisticated grey, he was running on a low tank of faith. Now you know I’m not one to debunk faith. Strength of purpose and human confidence arise from it. Without faith, no one would take a chance on anything. But faith has to be built on some greater knowledge, some understanding of ingredients, things that actually interact and work with one another and methodology that has, if not provable, likely results. Throwing in yesterday’s Chinese takeout to make a tuna casserole just won’t cut it. Best regards, Robert PS: “The greatest obstacle to discovery is not ignorance, it is the illusion of knowledge.” (Daniel J. Boorstin) Esoterica: I sincerely wish I could show you my friend’s work, but it was he who finally saw the light and had the thing deep-sixed even though he clung to it for several months. “Oh ye of so little belief,” he joked. “Ye were right.” Botticelli’s Venus does go on, however, even without a plurality of briefly-attired girls in one painting. I’d be interested to know if anyone can put their finger on why Botticelli’s work gave my friend so much faith. Share your ideas and opinions in our discussion area below.   [fbcomments url=”http://clicks.robertgenn.com/faith-based.php”]  Featured Artist: Cherry Sweig