You are at:Home»Letters»Family business
By ShawnA July 1, 2016 Letters

Yesterday, while disturbing one of the corners of Dad’s studio, I discovered a box of my grandfather’s paintings. Hugh Douglas Genn grew his Victoria, BC sign shop into Genn Advertising, making bus cards and ads for Vancouver Island businesses. His was an era of penmanship, “one shot” sign paint and a properly loaded quill brush. Everything he lettered was finessed with professionalism. On the side, Ad man Doug was a painter. 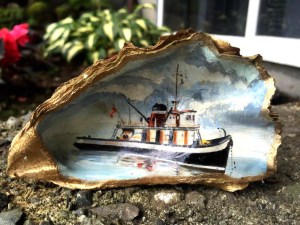 Looking at them now, Grandpa’s paintings are neat and graphic. He worked from photos or chose local scenery while on road trips with Grandma in his 1971 Chrysler Imperial and camper trailer. His style renounces fuss, his colours are cheerful, and surfaces are layered thinly from a lifetime of careful brushwork. Subjects include provincial flowers, exotic monuments, family portraits and favourite Chrysler products.

In the sunshine, I laid out a few decades worth of canvas boards for their final crit before culling. As well as my own stockpile and Dad’s lifetime of works, I hold the responsibility of archiving Grandpa’s best. On the back of most of the panels, he’d made a brief note — for example, “Photo taken by Bob” or “Official flower of British Columbia” or “painted at Rickie’s using only paper towel!” Among his creations, Grandpa also made something he called, “Oysterart.” He painted scenes on the inside of oyster shells, gilded the outside and mounted them on beach wood. Even in miniature, I savour his rulered, pencilled-in, then painted calligraphy — a tiny, perfect sign painter’s embellishment. 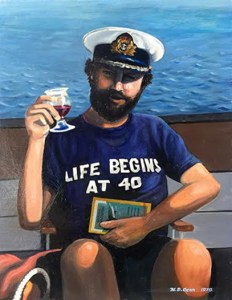 Esoterica: On visits to our house, I remember Grandpa pulling from the trunk of the Chrysler his recent efforts to present to my dad for a crit or perhaps for some words of encouragement. In the past, Grandpa had taught his son how to pull the squeegee as a summer job at the shop: “When I was about ten years old, Dad took me to visit a couple of Fine Artists. Both these painters seemed to me to lead enriched lives, working with integrity and to be anything but poor. They had no day jobs and, apparently no inheritance to keep their families comfortable. They worked long hours and sent excellent art to distant dealers. The penny dropped in my bony little head that an artist could prosper, and the penny has been lodged there ever since.” (Robert Genn, from Stereotype threat, May 29, 2009) 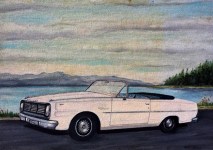 Vocations which we wanted to pursue, but didn’t, bleed, like colors, on the whole of our existence. (Honore de Balzac)