You are at:Home»Letters»First, Amy
By ShawnA February 16, 2018 Letters

When Amy Sherald was growing up in Columbus, Georgia in the 1970s, her dentist father encouraged her to go into medicine. “There was this attitude of, ‘The civil rights movement was not about you being an artist,’ ” she remembered. But as an introvert, Amy enjoyed painting and running and, unsure of what else she was good at, she felt drawn to a life in art. “I don’t feel like I chose to do it,” she said. Near the end of her MFA, during a medical check-up, Amy’s doctors told her that she had a barely-functioning heart and that she would eventually need a transplant. She was 30 years old. 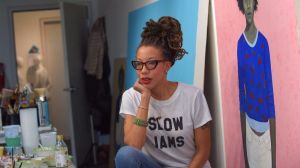 Amy Sherald, artist in residence at Creative Alliance, part of the “About Face” show, 2017

Exhausted and broke, Amy continued to paint, waiting tables and teaching art at the Baltimore City Detention Center, working to pay off student loans and pay for her heart medication. She explored self-portraiture, the circus and fantasy, inspired by the science fiction writings of Octavia Butler and the poems of David Whyte and Ralph Waldo Emerson. She had a recurring dream that she was running a race and collapsed at the end of it. When her mother needed care, she moved home to Georgia to take care of her and her ailing aunts. Her brother Michael was diagnosed with stage 4 lung cancer and she lost her Dad to Parkinson’s. Amy didn’t paint for the next three years. 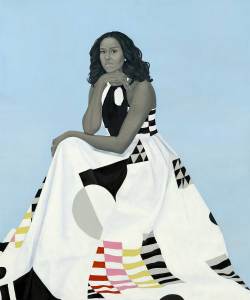 Back in Baltimore in 2012, working alone in her Station North studio, Amy was at the drug store picking up some studio supplies when she collapsed and was rushed to hospital. At 39, her cardiomyopathy had progressed to where her heart’s ejection fraction — the percentage of blood that leaves the heart with each beat — was now hovering at 5 percent. While waiting in hospital for a new heart, her brother Michael passed away. Eleven days later, the victim of an opioid overdose became Amy’s heart donor. After a year of recuperation, Amy returned to painting everyday people doing everyday things — often approaching strangers in her neighbourhood or in the airport — seeking to capture an intimacy that she felt perhaps only she could see. Graphically positioning her subjects in brightly-coloured clothing within a flat, colour-blocked plane, she polished a style. As part of her colour stories, Amy also began to paint, at times, her subject’s black skin en grisaille, as a way of challenging colour’s multi-layered vocabulary — including how it described race. 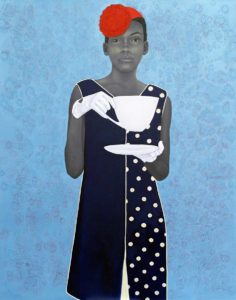 PS: “There’s not enough images of us.” (Amy Sherald)

“I just knew there were stories I wanted to tell.” (Octavia Butler)

Esoterica: In October 2017, at age 43, Amy was chosen from among about 20 portfolios submitted by curators at The Smithsonian’s National Portrait Gallery in Washington D.C. to paint the official portrait of former First Lady Michelle Obama. She was the first African American woman artist in history to be chosen. Of her selection, she at first tried to normalize the responsibility, saying, “I paint paintings of people. And I’m painting a painting of another person.” But when pressed about the meaning of it, Amy described her personal feelings for her subject: “She gave this country so much with her presence, just in being who she was. She gave a lot of us permission to be better and to want to do better.” Last Monday, after unveiling her portrait to a crowd in Washington, Amy was asked to reflect on the weight of the assignment: “I knew it was going be what I wanted it to be,” she said. Of Michelle, she said, “I told her that I wanted to paint her in my greyscale because I thought it would be a powerful representation, especially within the Smithsonian National Portrait Gallery — because something big happened. We have our first black President and our first black First Lady and I feel like their choices [of the artists to paint them]represent that — so that when people walk into this space of things that look continuously the same… all of a sudden there’s a break in that. And there was a break in history, as well — when they were in the White House.” (Amy Sherald)

“Good poetry begins with the lightest touch,
a breeze arriving from nowhere,
a whispered healing arrival,
a word in your ear,
a settling into things,
then like a hand in the dark
it arrests the whole body,
steeling you for revelation.
In the silence that follows
a great line
you can feel Lazarus
deep inside
even the laziest, most deathly afraid
part of you,
lift up his hands and walk toward the light.”
(David Whyte)