It’s a small island — eleven acres — centered in Tully Lake, Connemara, County Galway. The writer Oliver Gogarty lived here from 1923 till 1939. Gogarty rowed his dory on the lake and trawled without a hook in order to contemplate.

I’m dealing with the limits of an island, the appeal of a contained landscape, the value of microcosm. I’m dealing with abandonment, mould and mildew, moss and lichen. Here are whitewashed walls, a shattered greenhouse, long neglected gardens and orchard. In Gogarty’s derelict home, goats now wander in and out of bedrooms and look down between the cobwebby banisters. Around the shore are the remains of “crannogs” — man-made islands, ghosts of the bronze-age Celts. The sky above the island is constantly in motion and a fresh breeze sparkles the lake. Three days should be enough.

The 8×10 is a convention which lends itself to the island’s artifacts. Minor size for minor subjects. I’m working on mahogany panels, primed with clear medium to show the grain and the color of the wood. I look for everything I can inflict an 8×10 on. Rusty wheelbarrow, garden-shovel, watering-can, beehive, loose-box, writing-table, deck-chair, water-pump, petrol-engine, fountain-pen, spy-glass, boat-anchor, peat-cutter, step-ladder, kitchen-sink, and a collection of empty liquor-bottles which clang with the sounds of a ranting wake.

Now it’s my last day and at the agreed time I’m watching old Padraic Flynn laboriously rowing out from the far shore to fetch me. I guess I’m ready. I’m down to toadstools, fairies, miraculous inventions, dreams and dreams that will never come true. There’s a dozen so-so paintings, five rolls of film taken mostly on dark days, and this laptop’s batteries pretty well spent. I’m out of soda-bread. Too bad. I haven’t scratched the surface.

PS:
“I will arise and go now, and go to Innisfree,
And a small cabin build there, of clay and wattles made;
Nine bean-rows will I have there, a hive for the honeybee,
And live alone in a bee-loud glade.”
( W B Yeats, The Lake Isle of Innisfree)

Esoterica: Many artists recognize the value of “set” as a creative tool. The set need not be complex — it is an excuse to explore what is chosen or given, as well as the inventiveness of one’s mind.

The following are selected responses to various letters. Thank you for writing.

THE TOP O’ THE MORNIN’ TO YE! Having been to Ireland once and having been married to an Irishman for 40 years, and having Irish nuns take care of my dear 101 yr old grandma, I love the Irish. My youngest son is deceased — his name, Timothy. He stood in Galway Bay once looking as much a part of the landscape as anyone around. I am sure, like the song, that there is a bit of heaven there. I wish I were there painting.

The concept of islandness is basic to the human soul. It suggests a cozy bastion unassailable by the press and pressure of mediocrity and the ordinary. I’m sure this idea is particularly appealing to us artists. We require our independence in order to grow and follow the direction that only we can direct. On an island we might be left alone. “People can’t go there.” We are sequestered in our ivory tower of insular productivity. And as Yeats found on the lake isle of Innisfree — there is peace.

I find a bunch of things found in a row in the field or in a location is very satisfying. One gets a sense of discovery in such a place as Heather Island, but think of the paintable items you can find by a visit to a local antique or jumble store. I have been having a relationship and going to one for a while and she lets me pick out and paint all sorts of bricabrac, like dolls and widgets, and lots of other things like bowls and vases and then sometimes she takes them in the store and hangs them up along with the stuff I’ve painted and she has sold a few.

I have heard that you take older paintings on stretched canvas, remove them from their stretchers and mount them down on hardboard or mahogany plywood. What glue do you use?

(RG note) Everything from rubber cement to white carpenter’s glue to wallpaper paste. I’m not sure what is the best adhesive for this purpose. Perhaps someone among our readers may have an answer to this. My main reason for mounting canvas is to change format or size a bit. For example you can make a 10 x 12 or an 8 x 10 out of an 11 x 14. Paintings often profit from minor cropping.

The essential part of the assembly of your hyphenated found-items on Heather Island is that it is a collection. In this case it is a collection laced with your feelings of history. I do the same thing with insects. When I go out into the woods I look for all of the colored beetles and flies and butterflies I can see. Many of them I am able to name. But my idea has been to make a series of sketches of these fleeting beauties that may not be long for our world. However, when I go to Costa Rica, which I have done every winter for the past three years, there are always lots of them to see and to please me.

Zachary Goodman’s letter made my blood boil. To make such a gross generalization and proclaim on-line art as “crummy” is an insult to the many, many artists with works in brick-and-mortar galleries who have decided to also take the time and effort to become computer savvy and establish our own websites. In fact, the one thing we worry about is that our works do not look nearly as good on the web as they do in the gallery/studio. And in case he hasn’t noticed, there is also a lot of crap (excuse my French) in the galleries these days too. If he is worried about gallery representation, did he ever think of looking on an artist’s website to see the galleries listed where the artist’s work is shown!? Oooohhhhh!!!!!

I was somewhat shocked at the intensity of Mr. Goodman’s negative comments about artists who use the Internet to show their work. In defense of such a harsh statement that only “crummy art” is exhibited on the Web, I wonder if he has seen the sites of well-established artists such as Richard MacDonald, Martin Eichinger, Richard Schmid, Scott Burdick and Susan Lyon, and many, many others. I suspect that many factors are involved, but perhaps one major contributor is the Web system itself, specifically search engines (or Web designers not designing for search engines). I have never found the above mentioned artists in any of my online searches, even though they have their own domains and are well-known. I found these artists by more traditional means and then sought out their Web sites. Among other places, I exhibit my paintings and sculpture on my Web site. I am not currently represented by any gallery. It saddens me to think that one of my site visitors would assume that I CANNOT find representation because my work is really no good “in person.” I plan to enter the gallery system again very soon, but WHEN I AM READY. At this point, I do not have enough work to send to galleries and still do the shows I do.

Is it possible for you to come out to Ballyferriter for a visit and a pint while you are in the area?

(RG note) Thanks for the invitation. I’ll call next time. I’m not actually in Ireland right now. These current letters are constructed from notes from previous trips. Heather Island was for sale when I was there—hence my excuse for going on it. It was purchased by Guy St. John Williams and Gogarty’s old home has now been turned into a delightful small hotel. It’s mentioned among the Connemara sites…

Could you give an idea of what sort of planning you do for these trips? 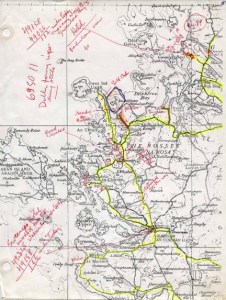 (RG note) The most useful resource is the Illustrated Road Book of Ireland, published by the Automobile Association. It’s a gazetteer that gives information on every town, village and bay. At one time I bought a complete set of Ordinance Survey maps of both Eire and Northern Ireland and these have been a marvelous asset. I select areas that are of interest and slightly enlarge them on a black and white photocopier and lay them out in a somewhat predetermined route and put them into a binder. I mark the maps with different colored inks in places where I take photos or paint something. This business is useful in keeping track of work done and the subsequent later naming of work. The map pages are generally consecutive so it’s possible to just turn to the next and you are on it. With good maps you don’t make as much progress over the landscape but you see more. Here’s what one of the maps looks like (left).