You are at:Home»Letters»Hope
By sara genn May 7, 2019 Letters

When I was a kid my folks took me on a road trip. As we approached the town of Hope, B.C., we saw, crawling up the shoulder of a steep hill, an ancient Model T Ford. A skinny, mustachioed man wearing a fedora was sitting up tall behind the wheel. Below him, a sign on the side of the old car read “Toronto or Bust.” Toronto was 5500 miles away. As we flew by in our ’47 Chev Fleetline I distinctly remember my dad turning to me, winking, and saying, “No hope.” My mom laughed. Dad turned out to be wrong. Two months later we read about the guy in the newspaper. He had driven from Vancouver, B.C., to Toronto, Ontario in a 1914 Ford. And then — he drove back! 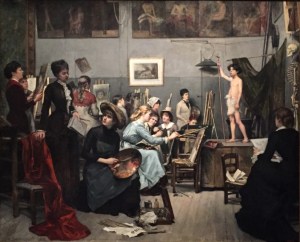 I’ve often thought about that fleeting image and the guy behind the wheel. Perhaps it was the seed that became my lifelong love of vintage cars. But it was the look of expectation that was on his face — it was a look of hope. He was unconventional. He knew not where he would spend the night. He was traveling according to his own code. And he feared not.

We artists are like that guy. We stick our necks out with old fashioned technology and try to make a journey out of it. This journey takes us goodness knows where. But that’s the point. Every day we crank up the old machine and head out once more along the shoulder of life. Many of us do not make it to Toronto, New York, London, Paris or even Oz. Who is there among us who fully understands where we get our vision or to what end it goes? Who understands fully how what we do can be both agreeable and disagreeable? To folks like us, the main thing is that we are on the road. And what a road. 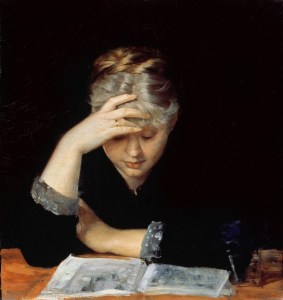 At a Book, 1882
oil on canvas
by Marie Bashkirtseff

PS: Hope is the thing with feathers
That perches in the soul
And sings the tunes without the words
And never stops–at all. (Emily Dickinson)

Esoterica: I started drawing cars when I was in college. Right down the sides of my math notes. They were old cars, classic cars. I saw value in something that had gone before. I thought I was going Romantic. My psych professor thought I was “regressive.” The more I drew the more I began to think about a golden era. The Great Gatsby took me to Singer Sargent. Then Tissot and Poussin and Bonnington and Constable. I became obsessed with academic painting and I’ve never been able to get it stopped. I’m often disappointed in myself, but not in my trip. “A bird doesn’t sing because it has an answer, it sings because it has a song.” (Maya Angelou) 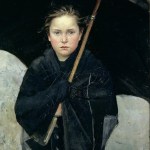 “When artists slip the collar of convention, only then can they roam the forest of new found sites. With skill they may return with their visions for others to see in the code of their paintings. I do not understand the language or code of the birds but I do still love their songs. New visions need not be fully understood–only agreeable. I believe that true genius does not understand the word fear–instead their sails are set by hope of unseen shores.” (Todd Plough) 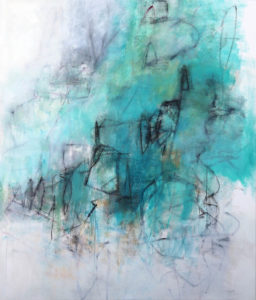 Explore and develop your personal voice in the inspirational environment of Santa Fe. Through guided exercises we will explore color, composition, value and working on multiples at the same time. Find your own signature with different mark making tools and learn how your marks enliven your paintings. Learn how to harmonize any palette, move from analysis paralysis to painting success and to trust your artistic choices. There will be plenty of time for independent exploration.

This intensive 3-day workshop is for all levels of artists who have experience using acrylic paint. At the end of day 3, join us and fellow artists for a no host dinner to celebrate your success.

For further details and to register see https://artbycat.com/home.html or https://julieschumer.com/.