You are at:Home»Letters»Horizontal painting
By clearmarble January 21, 2014 Letters
Dear Artist, A lot of us around here are known as Badgers. For example, my son James is Jim-badger. Sara is Sara-badger and on good days I get Bob-badger. Then there’s the stuff that the badgers have. We’re actually thinking about selling the Badg-Austin — the little red mobile-easel car. It has become too hard for me to get in and out of the back seat. And then there’s the Badg-easel. 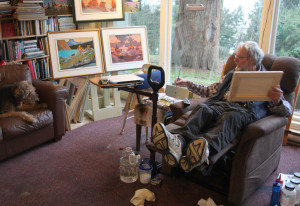 After several tries at various chaise-longues we’ve settled on a state-of-the-art American-made Serta power-operated recliner that not only lays you out in a variety of positions in memory foam but, when you’re finished, ejects you to an almost standing position. To the left is a photo of the Badg-easel in action and also included a close-up shot of how my palette has evolved to fit the system below. There’s nothing new about horizontal painting. On her deathbed in 1954, Frida Kahlo was in a lot of pain from gangrene and eventually had her leg amputated. She kept on painting. “Painting saved my life,” said Frida. She died at age 47. 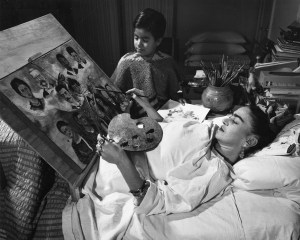 Henri Matisse, in spite of his avowed atheism, painted and designed many religious and spiritual subjects. David Rockefeller recounts Matisse’s work on the design for the stained glass window at the Union Church of Pocantico Hills near the Rockefeller estate north of New York City. “It was his final artistic creation; the maquette was on the wall of his bedroom when he died.” Like Frida, Matisse also died in 1954 and did his last work in bed. In my case, the Badg-easel provides a lovely sanctuary where position-fatigue is relieved by a push of a button. I’m contented and relaxed in this chair. But there’s another factor: At the present time I’m taking a tiny round green pill known as Dilaudid (Hydromorphone). Four times in 24 hours knocks the pain down to almost nil. While I’m not conscious of any particular euphoria, my doctor-friend Gil Dyck advises, “Don’t take the pill for any other reason than managing your pain.” Believe me, I’m feeling no pain. So far, the paintings coming off the Badg-easel don’t look too bad to me, but that may be the pill-badgers. 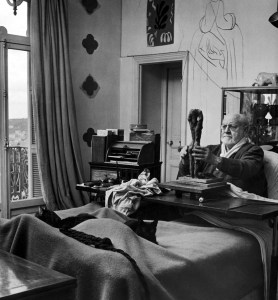 Best regards, Robert PS: “What I dream of is an art of balance, of purity and serenity, devoid of troubling or depressing subject-matter, an art which might be for every mental worker, be he businessman or writer, like an appeasing influence, like a mental soother, something like a good armchair in which to rest from physical fatigue.” (Henri Matisse) Esoterica: I’ve had a lifetime of easels — water, land and airborne, some with wheels and some forever locked in place. Some were complex contraptions with counter-weights and in need of regular grease. Others were simple, tiny, and often homemade. And, yes, I’ve always looked for some sort of balance, “a mental soother” as Matisse said, in both the art and in the place to make it. A calm mind and a steady purpose may help things turn out okay. 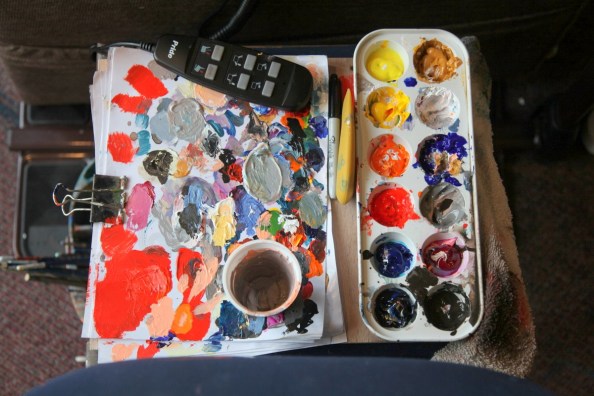 This sits on a chair, in my case immediately to the right of the recliner. Regular fast-drying acrylics are in the egg thing that you get when you buy a fridge. The towel, barely visible on the right, is flopped over the egg thing and kept wet when not in use. Colours stay wet indefinitely. Brushes, water and medium are on the floor below (to the left in this picture) and can be swizzled without looking. The palette I’m using right now is Cad yellow light, Cad yellow medium, Cad orange light, Cad red light, Phthalo blue, Ivory black, Yellow ochre, Titanium white, Ultra blue, Neutral grey no. 5, Quin crimson, Raw umber. I try not to leave the recliner remote lying on the mixing area. 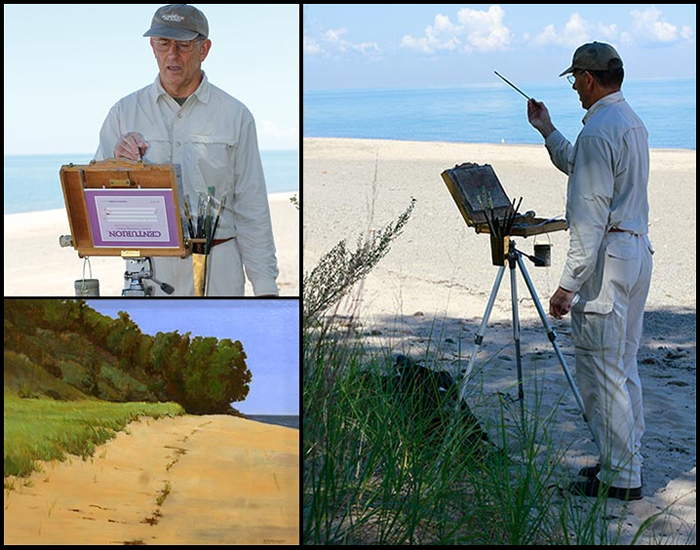