At the Galleria dell’Accademia in Florence, David gazes past the selfie-sticks towards Rome in a qualified stare. A vibration detector at his left heel monitors traffic, construction, earthquakes and the incurable footsteps of his visitors, dribbling now in controlled numbers into the atrium. At 17 feet tall and 6 tonnes, he’s perfect except for tiny fractures in his ankles. Italian scientists found them during some tests recently, while trying to figure out why he was leaning a little past his intended contrapposto (the body-twist and weight distribution designed by his creator). While David’s balance is just so, those first 350 years outside in the elements of the Piazza della Signoria have threatened his fifth century of uprightness. 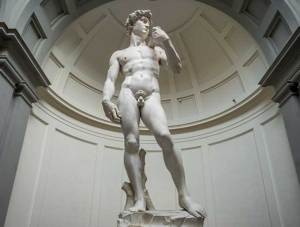 In 1410, the overseers of the Office of Works of the Florence Cathedral commissioned a series of large Old Testament figures to adorn the Cathedral’s buttresses. A block of white Carrara marble for the statue of David was brought from the Apuan Alps to Florence and a couple of whiz-bangs took passes at the job in succession, roughing in proportions and then mysteriously giving up. By then the block had been nicknamed, “The Giant,” and was abandoned in the churchyard for a couple of decades. Eventually, the overseers raised the block to stand vertically in the hope that it might inspire a new master. Twenty-six-year-old Michelangelo took the commission and tapped his chisel in the Fall of 1501. He worked non-stop, sleeping in his clothes and covered in marble dust for the next 2 1/2 years. 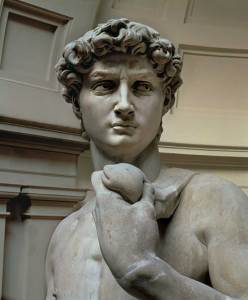 “Every block of stone has a statue inside and the task of the sculptor is to discover it.” (Michelangelo)

After realizing it would be physically impossible to get David up onto the Cathedral’s roof and organizing a committee to figure out where to put him instead, he was placed in the Piazza in central Florence. From there he eyed the Republic’s rival, Rome, with the wariness of the Biblical boy about to face his nemesis giant, Goliath. With the exception of a bench, tossed from a window and breaking his arm in 1527, and enduring the Second World War encased in protective bricks, David weathered over three centuries there without catastrophe until he was moved in 1873 for safekeeping to the Accademia. In 1991, after David was attacked with a hammer by a deranged artist, conservators analyzing chips from his left foot discovered the marble was riddled with organically-formed microscopic holes. A debate ensued in 2008 about whether cleaning him with water would accelerate his erosion. In the end, David’s been left to stand on his own weak ankles under the diffused softness of the Accademia’s dome. “I saw the angel in the marble and carved, until I set him free.” 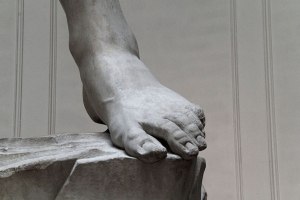 PS: “Anyone who has seen Michelangelo’s David has no need to see anything else by another sculptor, living or dead.” (Giorgio Vasari)

“I am still learning.” (Michelangelo)

Esoterica: Artists today may not need to share the same concerns of archival longevity with the geniuses of the Renaissance. Climate scientists warn that we won’t likely reach the end of our current century with a habitable planet. Studying the pastel pale muse of Botticelli’s Birth of Venus at the nearby Uffizi Gallery, I zoom in to confirm she’s not a poster from the wall of an old college dorm — her sea foam and scallop shell imagery is so familiar and her invisible brushwork as flat as a sheet of masonite. The selfie-takers step up to the alarm line to add her to their hoards of digital greatest hits, while Venus’ real-time vibes still pulse silently for conversation with the ocean-crossers and art pilgrims who are more fully present. “My soul can find no staircase to heaven unless it be through earth’s loveliness.” (Michelangelo)

“As when, O lady mine! /With chiselled touch /The stone unhewn and cold / Becomes a living mould. / The more the marble wastes, / The more the statue grows.” (Michelangelo)