You are at:Home»Letters»If I were an Artist
By clearmarble January 11, 2002 Letters

I’m at the corner of Hoohu and Pee Rd. in Poipu, Kauai. The trees here are Koa, Pandanus, Ohia-lehua and Fig. To the eyes of a guy from up north some of these trees look like they were designed over the phone. If I were to paint the sea that color they wouldn’t believe me. That cardinal over there requires a red I’m not sure I can make. 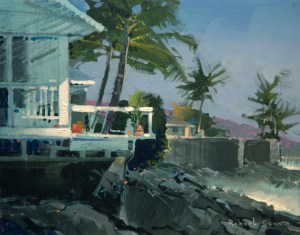 I’ve seen this woman before. This morning she was standing on the Keoneloa bluff waiting for the sunrise. She’s a big woman, with big features. She wears a floral mu’umu’u. Her skin is mahogany. She’s missing a few front teeth. “If I were an artist,” she says, “I’d record the sunsets we have here. And the sunrises. Did you ever see anything like them?” I agree with her that last evening was surreal. “And the birds are wonderful don’t you think? I would paint the birds,” she says. “These birds here are all different than the ones my grandmother knew. They’re better now. Not as rare, but more beautiful. They’re getting more beautiful all the time. And more of them. I’d do the birds if I were an artist.” I show her my bird book. “These are the wrong names,” she says, flipping through he illustrations. “That’s the Poo-uli; that’s the Iiwi; that’s the Akialoa.” I tell her it’s really great that she knows them by their authentic Hawaiian names. “You might not be able to do them if you didn’t know what they were,” she says. She looks at what I’m doing. I can see that she feels in her heart she would do it better. Then she calls out to some folks she knows and rushes off to talk to them.

This dazzling, midday light is difficult. It lends itself to the impressionist way. Or perhaps I should make it super-real. It’s all so super-real. And the water is dancing with abstract patterns. I feel like Gauguin. I think I’ll paint the sky red. Even though it’s blue. I only think I’m an artist. I wonder if I’m doing my job.

PS: “An artist is only an artist on condition that he neglects no aspect of his dual nature. This dualism is the power of being oneself and someone else at one and the same time.” (Charles Baudelaire)

Esoterica: “For us artists there waits the joyous compromise through art, with all that has wounded or defeated us in daily life — not to evade destiny, as the ordinary people try to do, but to fulfil it in its true potential — the imagination.” (Lawrence Durrell)

If you want to see the most beautifully colored Hawaiian ocean, then go to Kailua or just past it to Lanikai on Oahu on a sunny day. Take your dark glasses and lots of thalo and white. Amazing! The problem is that it is so unreal that you wonder whether your viewers would find it believable unless they had been there. Hawaii IS a paradise! Aloha nui kako!

A purple glow
by Amelia Jordan

I lived in Hawaii for 2 years and never knew how to paint those colors without it looking fake. One night we had a rare thing, a purple evening. It doesn’t happen often but when it does, at dusk everything glows purple — your skin, your clothes, the furniture on the lania, the house, trees, absolutely everything. It lasted about 20 minutes and was wonderful.

Dare to be
by Maureen Cameron

My sister (who has claimed her artist soul) sent me your newsletter and I have been the happy recipient ever since. Your letters are one of the items I delight in opening, like a present, anticipating the unknown and always inspired touched. Today, I burst into tears, and it isn’t the first time. It is the first time I’ve written in response. Perhaps I’m hoping by doing this I’ll find a way to dance with this intensity I feel. A clue to the movement that takes me to the next step, claiming my passion for life and responding to this urge to express, to communicate something of what stirs in me, and daring to be an artist, with all that means or doesn’t. I love these words, “joyous compromise through art.”

Pick up the brush
by Eleanor Blair, Gainesville FL, USA

I can only wish I were there. Here I am on the Turquoise gulf of the Florida panhandle again, and asking myself how can I paint this, I have tried so many times before. This time I may get closer. Maybe if I dig out the oil paint from the bottom of the stuff in the car and forsake the watercolors. I do love the viridian though.

I went travelling last summer in South East Asia, Oceania and LA. My absolute favorite places were Thailand and New Zealand (for a moment I thought you might be there). I felt like I think you did: things looked slightly surreal because so unlike anything I was used to seeing, but at the same time I had a heightened sensitivity (don’t know if that is the right word), perception, which made things feel super-real, like you said.

The way I see them
by Beverley McInnes, Nova Scotia, Canada

I have a Spanish artist friend who loves to paint the world as he sees it and the colors are truly staggering! When I queried him, why he painted the blue, mauve and pale pink Lupines bright reds and oranges, he replied, “But, that is the way I see them”. Is this not a refreshing way to look at the world?

I recently acquired the new book by David Hockney, Secret Knowledge: Re-discovering the lost techniques of old masters. I love it. A year ago a friend had showed me an article from the “New Yorker Magazine” about Hockney’s new pet theory, that the artists of the Renaissance had used primitive cameras, or optical devices we would now call camera obscura and camera lucida to create their masterful paintings. I was fascinated. This year Hockney published a full book. I have been painting and drawing for years, but I had been using what Hockney refers to as the eyeball method. Hockney outlines how anyone can easily draw an object in front of him, using a simple object found in the home — like a shaving mirror. Evidence gathered in the book’s third section delineate how the artists kept these methods secret for centuries, believing that anyone could make art as easily, with these simple tools. I’ve resolved to work this method into my art classes. I can teach anyone this mirror method now — the young ones anyway. I can get shaving mirrors for them, and they can learn to trace and shade in the reflected images there. All the rest are going to have to learn about composition, textural variety, color balance, linear harmony and all the rest. The book is fun to read, with gorgeous illustrations. Perhaps the book is not very scientific, but I haven’t asked very many scientists to be more artistic with their work. It makes enough sense to me. I’d be interested in opinions from other artists. I’m also interested in the opinions of people who buy art — do art patrons care how art is generated?

(RG note) Significant artists are often dazzled by the work of someone like Ingres or David and feel they must have done it with smoke and mirrors. Lots do, and that probably includes more of the historical masters than some would care to admit. Direct projection is more popular today than shaving mirrors. It’s a useful slave and a tyrannical master. It used to be more of a secret than currently. Dealers don’t care.

How to succeed
by Jane Champagne

To laugh often and much,
To win the respect of intelligent people and the affection of children,
To earn the appreciation of honest critics, and endure the betrayal of false friends;
To appreciate beauty,
To find the best in others,
To leave the world a bit better, whether by a healthy child, a garden patch,
To know even one life has breathed easier because you have lived.
This is to have succeeded. (Ralph Waldo Emerson)

You may be interested to know that artists from every state in the USA, every province in Canada, and at least 81 countries worldwide have visited these pages since January 1, 2002.