When I first started writing these letters almost two years ago I wondered how long it would take me to run out of ideas. Now I realize there is new material coming up every day. As well as my own “easel thinking,” the insights and concerns of corresponding readers never fail to provide challenges. Right now I don’t think I’ll ever run out.

While my motive has been sharing and empowering, I’ve also had the blessing that, in the name of fine-tuning, it’s also myself that has benefited. My own learning curve has gone into outer space. Those who have read my book “The Painter’s Keys” know that we workshoppers wander over subject matter like a rudderless ship. There’s so much to learn. Lofty subjects such as inspiration are transformers into the esoterica of how one actually holds onto a brush. Here are a few of the insights from these exercises:

Every artist is a sovereign being.

Every artist has the right to negotiate his own deal himself.

There is no single Ecstasy or Viagra that can invigorate art-life.

The conventional wisdom of most current art schools is suspect.

The idea that empowerment is in someone else’s hands is still rampant.

Rugged individualists can write their own rules.

Some of the greatest artists of all time are living and working today.

The most valuable artist’s tool is attitude. Habits are more holy than messiahs.

It’s wonderful to fall in love with it.

PS: “Nothing is written.” (T E Lawrence (Peter O’Toole) to Bedouin Chieftain (Anthony Quinn) who said, “It is written,” in David Lean’s Lawrence of Arabia, 1962)

Esoterica: One of the greatest satisfactions is knowing members of our brotherhood and sisterhood who persevere. These are the true geniuses. “Victory belongs to the most persevering.” (Napoleon)

The following are selected responses to the above letter. Thank you for writing. 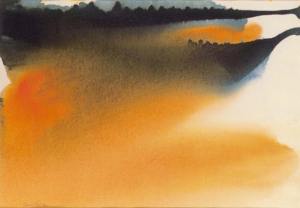 Regarding “Every artist has the right to negotiate his own deal himself” and “The most valuable artist’s tool is attitude.” Ever since I started to operate under those beliefs I have been so much more successful and happier. That system works for me. This refers to life as well as the art business. Here’s an art plan that I put into practice for myself. It may work for others. I call it, “Reach Mondays.” For art ideas, phone calls, follow-ups in the form of letters or e-mails, projects that are daunting to me or that I have put off — these I do or start on Mondays. Also I have a mind set that I get a new idea or perspective on Mondays. (The mind is a mysterious and wonderful thing!) By focusing on one day it avoids the “I’ll do that tomorrow syndrome.” At the end of the day I feel that I did something or at least tried to. Sometimes I get a “Monday idea” on another day. That is a lagniappe!

Empowerment in other people’s hands is deeply entrenched in many cultures. It probably comes in part from the concept of subjugation to the omniscient power of a godhead. This idea has held up progress in civilization and manifests itself in many harmful and also harmless ways. The popular belief in astrology is an example. It is important for artists to understand that they themselves are in charge of their destiny. In that sense what we do is the ultimate in self-anointed creation, and that, short of our moral obligations to our fellow humans, we are not in any way dependent on any laws, opinions, or outside forces.

“Habits are more holy than messiahs.” What a great line. Where did you get that one? (TN)

(RG note) A few years ago I wrote a little (very little) book called, The Dreamway. The line came from that book. Not many people could figure the book out. I couldn’t figure it out. Consequently there’s still quite a few little books lying around my studio. If anyone would like to have a copy I’ll see that you get one in the regular mail. It’ll be free, too. Just drop me a note with your regular address and “Dreamway Please.”

I think that everybody has the rightand should demand the right — to negotiate his own deal himself. Can you imagine an artist’s union? When most people think of union thinking they think of average quality goods produced by people who sell their time for ultimate security. While there is nothing wrong with this, that kind of normalization does not work in the arts.

Artists of life
by Jill Badonsky

I am writing a book on that elusive thing called inspiration. I was wondering if I could have your permission to quote your eleven insights on the subject with credit to you and mention of your book. My book has to do with ourselves as “artists of life.” I am a sovereign being: I can make up my own rules for how I live my life based on my greater good. I have the right to negotiate my own deal myself. There is no system that tells me I have to do something just for money or just to make others happy. My intuition will lead me to the best negotiation system for myself. I may spend large amounts of time on something purely for the enjoyment of the process while I am in it. There is no drug that will inspire me. I inspire myself by the way I choose to look at the world. Inspiration comes in its own time with little scientific reasoning but I can set up the conditions for it by paying attention to my habits and being as present as much as possible. Most conventional wisdom is suspect. I find out what is right for me by listening to my own wisdom, by taking risks and contemplating the results and by cultivating confidence in my uniqueness. Empowerment is in my own hands. Nobody can empower me but me according to my own values, passions and motivation. I find what works for me and use it as best I can. I am a rugged individualist. I write my own rules. What other people think of me is none of my business. I relish and celebrate the freedom I experience with this kind of thinking. My most valuable tool is my attitude. I have the freedom to choose how I think and can think either in a way that serves me or in a way that defeats me. The habits I adopt are most likely what I will follow. I need to carefully design my habits to make time spent with my God-given, value-originated passions more automatic. Awareness of my habits and establishing healthy routines will give less power to the unproductive distractions in which I sometimes find myself participating. Life is complex, its not always fair, its rarely predictable, it’s what happens, as John Lennon says, “when you are making other plans.” And yet I love the mystery of it. “The most beautiful experience we can have is the mysterious: it is the fundamental emotion which stands at the cradle of true art and true science.” (Albert Einstein)

I edit a tattooing magazine, INTERNATIONAL TATTOO ART. We cover a lot of tattoo-related ground, including a lot of what has come to be called lowbrow art. I wanted to use this quote in an upcoming issue: “Some of the greatest artists of all time are living and working today.” May I have permission? Possibly in relation to the recent death of Ed “Big Daddy” Roth, but more likely as a trigger for an editorial on the special pressures tattooists face. If you’re out of that field, and I suspect you are, tattooing has literally rescued thousands of fantastic talents from going to waste. People with a sharp graphic talent don’t have many avenues open to them – or not many rewarding ones, anyway. A few slots in Disney and the comics. Many young tattooers would literally be in prison if they hadn’t found tattooing – and a lot of them will admit it. Men and women with these giant talents that would have been stifled had the skin trade not blossomed like it did. Day after day commissioned works are produced by proud and dedicated tatooists.

(RG note) Permission granted. Publications, newsletters and web pages are generally welcome to use material provided they give credit to the twice-weekly letters. Persons quoting correspondents in these clickbacks should contact the individual author directly.

Some of your letters have a more spiritual quality than others. These are in the form of allusions to religion and a wider understanding of world faiths. When you are like this I see a deeper, more thoughtful being, with a healthy suspension of judgement on your partand I like him better than the regular guy who dishes out tips. Keep it up. You are showing signs of being highly evolved. “There lives more faith in honest doubt, believe me, than in half the creeds.” (Tennyson)

Regarding the butterfly phenomenon — It’s not only to do with money and the pursuit thereof; it’s in everything! For example, I am getting my paintings ready for a show, and I know the logical thing to do would be to work on finishing the larger pieces which, if they get sold, would bring in more money, satisfaction, etc., but what am I hung up on? A silly little watercolor that has been bothering me, and I look at it from every direction, in the mirror, upside down, try it in different mats, frames, you know what I mean. It seems like such a waste of time, and maybe it is, but who’s to say? Because maybe in solving the problem of that little watercolor, I will have a breakthrough that pays for itself in ways I can’t predict — and then the larger paintings will paint themselves! And the painting is only the beginning, because the problems of Life are also lurking in the background, waiting for me to let go of something I’ve been hanging on to, like it was gospel. A friend told me once that he knew how he was doing emotionally by the way he was dealing with the negative shapes in his painting. I can’t exactly explain that, but I do understand it, and its one of the reasons I do Art.

“Art is the giving by each man of his evidence to the world. Those who wish to give, love to give, discover the pleasure of giving. Those who give are tremendously strong.” (Robert Henri) For the Resource of Art Quotations. My printer gave up at page 79.

You may be interested to know that artists from 82 countries have visited these sites since January 1, 2001.

That includes Wayne Lin, who says, “The mind is like a parachute. It works best when it is opened.”

And Moncy Barbour who is now going to try painting on birch panels.

And Brad Brace who says he has produced a “Round-the-clock posting of sequenced hypermodern imagery which minimizes the familiar, known, and recognizable and which suspends identity, relations and history. This discourse, far from determining the locus in which it speaks, is avoiding the ground on which it could find support and operating a decentering that leaves no privilege to any center.”

(RG note) A future letter will take a look at unraveling the marvellous world of art jargon and artspeak.

I truly appreciate you adding my survey to the clickback. Once I looked through the letters I discovered there is a fantastic archive of artists and their experiences posted here. I have had a very successful response to my survey and will be letting you all know the results in the next few weeks.