You are at:Home»Letters»It’s never too late
By ShawnA August 21, 2015 Letters

Like Mozart and Michael Jackson, Picasso was pumping out masterworks before puberty and demonstrated the key features of early bloomers: he was prolific, energetic, intuitive, idea-driven and speedy. At 15 and while still in art school, young Pablo painted his sister Lola in The First Communion — you can see it at the Museu Picasso in Barcelona with many of his other adolescent efforts. University of Chicago economist David Galenson, after analyzing auction results, concluded that Picasso’s earliest works are his priciest and therefore his best. According to Galenson, the poor guy peaked early. 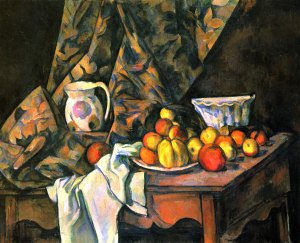 In his 2007 book, Old Masters and Young Geniuses, Galenson reveals two types of artists: early bloomers and slow boilers. Genius, he says, is a young artist’s game, while the undiscovered luxuriate in time to flesh out deeper, more researched ideas. In other words, early bloomers get the satisfaction of acceptance and its accompanying pressures, while slow boilers are left to simmer on grit.

Simmer on this: Thelonious Monk and Van Gogh bloomed “late,” as did preschool-teacher-turned-explicit-indie-musician, Peaches, at thirtyish; while George Eliot, Dorothy Allison and Toni Morrison didn’t publish until after forty. Ang Lee was a stay-at-home dad who took odd jobs on film sets before he directed The Wedding Banquet at forty, but he’d been making films since grad school. Louise Bourgeois devoted her life to her art before being “discovered” at seventy-eight.

While Picasso was preparing to paint Lola, Cézanne, at 55, was landing his first solo show. He’d already failed to gain entrance to the École des Beaux Arts and had been rejected by the Paris Salon every year between 1864 and 1869. He then continued to submit and be rejected until 1882 — that’s 18 years. By the time Paris dealer Vollard showed up in 1895, Cézanne had slashed thousands of substandard efforts and flung other rejects into his garden in Aix. Slow boilers are crafters and explorers, perfectionists and visionaries, afforded a private evolution unspoiled by the myopic values of a capricious marketplace. Not that it matters, but the highest prices for Cézanne’s paintings are from the year he died. 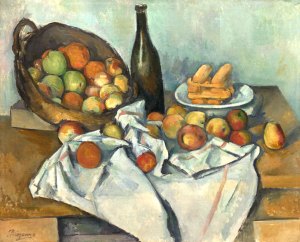 “It’s never too late to be what you might have been.” (George Eliot)

Esoterica: Art historians love to dissect Cézanne’s poor draughtsmanship and lack of understanding of academic principles. Over his lifetime, Cézanne’s vision blossomed into something beyond technical limitations. In 1990, at the age of 18, I walked into art school and my first painting class. Students were arranged at standing easels, circling a still life of fruit and a draped tablecloth. As we squeezed out, a Cézanne-look-alike professor shuffled into the room and said, “Everything worth painting has already been covered by Cézanne. Good luck.” 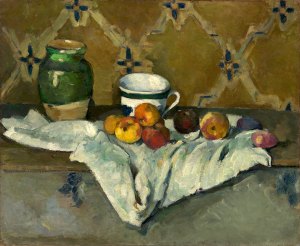 “I took your news outdoors, and found the Spring
Had honoured all its promises to start
Disclosing how the principles of earth
Can make a common purpose with the heart.

The heart which slips and sidles like a stream
Weighed down by winter-wreckage near its source –
But given time, and come the clearing rain,
Breaks loose to revel in its proper course.”

(From Spring Wedding by Andrew Motion, Poet Laureate of the United Kingdom from 1999-2009, in honour of Prince Charles’ marriage to Camilla Parker-Bowles.)