You are at:Home»Letters»Jacques Majorelle
By ShawnA November 8, 2016 Letters

Jacques Majorelle (1886-1962) was the son of a celebrated furniture designer of Nancy, France. Suffering from heart problems, he came to Marrekesh for his health in 1919 and immediately saw the painterly potential of southern Morocco. In 1924 he acquired land, called himself a “gardenist” as well as an “artist” and began the lifelong project of creating a unique botanical expression around his studio. He opened his garden to the public in 1947. Upon his death in a car accident the property fell into disorder — until it was rediscovered by couturier Yves Saint-Laurent and his artist-friend, Pierre Berge. Majorelle’s Art-Deco-inspired studio, painted the original bright blue, is now a museum and gallery of Majorelle’s work. Travellers wander among exotic plants and spectacular cacti. 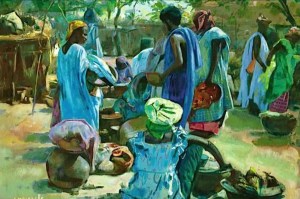 I’ve always been curious about the old rule that “blue and green should not be seen without another colour in between.” The combination in Majorelle’s garden really rattles your molars. The variety of natural greens seems to electrify the hard, strongly painted blue that is said to be “cobalt.” Majorelle had noticed the colour in Moroccan tiles, Berber burnouses, and around the windows of everything from kasbahs to native adobe homes. In southern Morocco you can’t miss it. For a while in the thirties and forties some artists’ colourmen were offering “Majorelle Blue.” I made the colour by using ultramarine, white and rose-red. 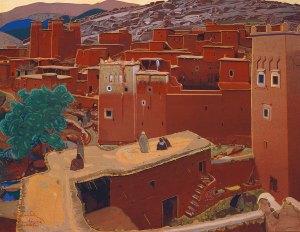 Morocco is a moving feast of complexity — crowds, repetitions, contrasts, colours, energies, light. Many painters would make the impressionist choice. Not so Jacques Majorelle. He solved problems with simplified drawing and linear, often outlined design. Posteresque, almost Nordic, his work heads toward abstraction while maintaining control of subject matter. Interlocking patterns of dark, light and local colour complete the illusion that there is more than what there is. 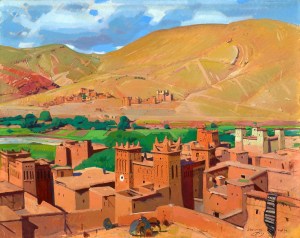 PS: “When we arrived in Marrekesh, Yves and I were utterly seduced by the beauty and the magic. What we did not expect was that we would fall in love with a small, mysterious garden, painted in the colours of Henri Matisse and secluded in a bamboo forest, all silence, deeply sheltered from noise and wind. This was the Majorelle Garden. Years later, quite by chance, we came into possession of this jewel and set about saving it.” (Pierre Berge)

Esoterica: Jacques Majorelle’s work can also be seen in Marrekesh in the famed Mamounia Hotel. Winston Churchill was a frequent guest and painted here as well. This afternoon I sat for several hours in the hotel garden, smoked a big cigar, and repeated one of Winston’s views.

This letter was originally published as “Jacques Majorelle” on November 18, 2003. 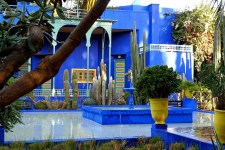 Nothing is more the child of art than a garden. (Sir Walter Scott)