You are at:Home»Letters»Japanese prints
By ShawnA August 15, 2017 Letters

It’s raining in Paris. The open-air book and print kiosks along the Right Bank of the Seine are clothed in plastic sheeting, their owners huddled in overcoats. They smoke soggy cigarettes, pull down their caps and complain to their neighbours how the weather is ruining the business. 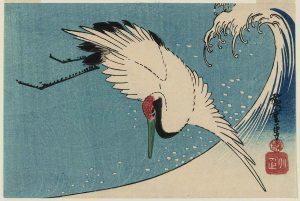 Notre Dame Cathedral rises up behind, a grey eminence, as if it has always been there. Through the streaming droplets, I’m looking at contemporary Japanese woodblock prints, clothes-pegged alongside inexpensive, shrink-wrapped reproductions of Hiroshige, Hokusai and Utamaro. At one time, on this exact pavement, the likes of Van Gogh, Bonnard, Degas, Cassatt and Toulouse-Lautrec would have examined these same images. Here are some of the characteristics they might well have noticed: 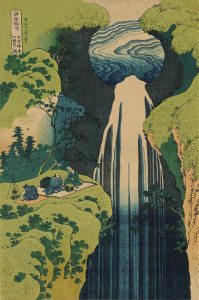 The early Impressionists would also have understood the origins of this art form. At first there was Japanese painting with its characteristic Sumi-e brushwork, and its “first stroke right on–no going back” limitation. Then there was the translation of this freehand skill into the stubborn resistance of the wood block. So that the fine lines on the key blocks would stand up in relief to take the printer’s ink, the incising had to be made carefully around and up to the lines. The adaptation from one form to another presented special problems and invited special solutions. The early Impressionists would have seen that technical awkwardness, while frustrating and demanding, often becomes the generator of a new way not only of making art but of looking at things. Forcing one art form to become another opens new opportunities for invention. 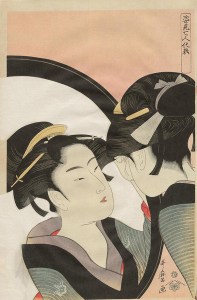 PS: “This day I have found something wonderful that I shall surely copy.” (Vincent van Gogh)

Esoterica: Japanese art came out of the rain and went upscale. Siegfried Bing (1838-1905), a German living in France, travelled to Japan and collected wildly. Bing launched a magazine, “Le Japon Artistique,” and hired van Gogh to promote it. Bing didn’t pay him much, but van Gogh was pleased just to be surrounded by the collection. Bing’s Parisian gallery was called “L’Art Nouveau.” The Art Nouveau movement turned away from rigid classical designs and found inspiration in nature in the shapes of flowers, birds and insects. Bing was a catalyst who united his passion for “japonisme” and the skill of selling.

This letter was originally published as “Japanese prints” on December 12, 2006. 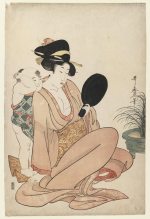 “If we study Japanese art, we see a man who is undoubtedly wise, philosophic and intelligent, who spends his time doing what?… He studies a single blade of grass.” (Vincent van Gogh)