You are at:Home»Letters»What’s your ministry?
By clearmarble June 20, 2014 Letters
Dear Artist, In a recent commencement address at the Maharishi University of Management in Fairfield Iowa, comedian Jim Carrey describes the moment he gave a name to his life’s calling. “The purpose of my life had always been to free people from concern,” says Jim. “I dubbed it, ‘The church of freedom from concern,’ or ‘FFC.’ I dedicated myself to my ministry. What’s yours?” 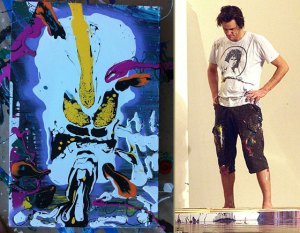 As artists, we may or may not have a name for the ineffable value we’re striving to offer the world. Each of us — a ministry of one — goes to our studio and practices a set of our own directives. This daily work is an offering to others while remaining a personal mission and a private devotion. Our actions are individually designed but, in their uniqueness, strike a resemblance to those of others: We put in hours. We make a habit of observing the world with compassion and appreciation. We honour the imagination. We sign our name to our craft. We’re sensitive to input and output. We go to our room to cultivate ideas on a solo path. We know we’re not alone. Jim Carrey’s dad was a struggling accountant who dreamed of being a comedian. The lessons he offered young Jim included the power of playfulness and the idea that you can fail at what you don’t want, so you might as well take a chance on doing what you love. Early on, Jim realized he was his dad’s second chance at an impossible dream, so he devoted his life to the mission he was born to carry. In 2012, at the age of 50, Jim Carrey took up painting and opened his first solo show in Palm Springs. “The purpose of art,” he wrote in his artist statement, “is to bring people into presence.” 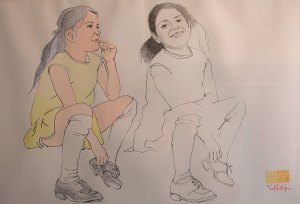 Sincerely, Sara PS: “All there will ever be is what’s happening here. Decisions we make in this moment are based in either love or fear. So many of us choose our path out of fear, disguised as practicality.” (Jim Carrey) “My father used to brag that I wasn’t a ham, I was the whole pig.” (Jim Carrey) Esoterica: Growing up in our house, we would see some early original lithographic drawings hanging in the hallway near our bedrooms — fast, loose sketches filled with casual élan. One in particular is of a little girl in knee socks. She’s drawn twice on the same page — a quick exercise, and then a second sketch — a second chance at crafty effortlessness. In the lower right hand corner is a small, hand-lettered bit of text. It reads: “Love something? Serve it.” And underneath is my Dad’s signature. “How will you serve the world? What do they need that you can provide? The effect you have on others is the most valuable currency there is.” (Jim Carrey)   [fbcomments url=”http://clicks.robertgenn.com/jim-carrey.php”]  Featured Workshop: M. Douglas Walton