You are at:Home»Letters»Let there be light
By ShawnA June 12, 2015 Letters

Janet Coulson of Cobourg, Ontario wrote, “I’m about to move into a condo where my studio will be in the basement with small, high windows. Do you know anything about lighting or could you direct me to someone who does? My studio now has a large window as well as sliding glass doors. I’m a little worried about the change.” 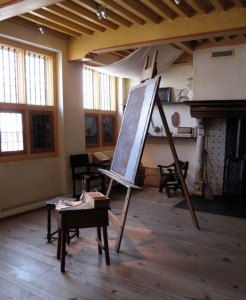 A reconstruction of Rembrandt’s studio, Amsterdam. Note the positioning of the easel and the rear window’s reflected light controlled with a high shade, with the lower windows blacked out.

Thanks, Janet. You want a space that provides steady ambient light with options for dramatic lighting of painting subjects and a secondary easel area for reviewing work. Here’s what you’ll need:

Light that doesn’t change too much over the course of the day.
Light that’s not too warm or too cool.
Light that delivers a full spectrum of colour.
Enough light.

There’s a rumour that in the Northern hemisphere North light is best for painting. But ambient daylight can be mimicked with diffusing techniques and good bulbs. My studio has two over-sized West-facing windows hung with translucent linen curtains. A white ceiling bounces this soft light, too. Higher, smaller windows can be managed in much the same way, by exploiting or controlling reflected light and shadows. If you’re lighting objects to paint, concentrate the light source, like Rambrandt did, by hanging a shade above the window and across the ceiling. For softness, make the shade a hood, and bounce the light down into your workspace like a photographer’s diffusing umbrella.

For bulbs, know the temperature, as it affects how you see colour. Measured in Kelvin, the higher the K, the cooler the light. North light in the Northern hemisphere is about 10000K — a little too blue for painting. A good old-fashioned incandescent bulb is about 3000K — too orange. Your sweet spot is about 5000K. 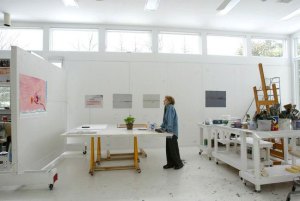 Helen Frankenthaler in her studio
Darien, Conn. in 2003

In rendering colour, a bulb is measured by the Colour Rendering Index, or CRI. Daylight has a rating of 100. An incandescent has a rating of 96 but remember, it’s a bit warm on its own. A compact fluorescent has a rating of about 80 — vampirish in a post-apocalyptic splendor — though manufacturers are tweaking aggressively to improve things. It sounds like science, but light is an art.

A bulb’s brightness is measured in lumens — the higher, the brighter (not to be mistaken for wattage, which measures energy requirement.) Keep in mind that light strength is diminished as the bulb gets farther away from the easel (this is called lux value) but, if you’re in a small space, a little trial and error can make it work. In addition to incandescents, LEDs and CFLs, halogens brighten handily but are spotty. I use them on tracks at night and hold my nose at the shadows because of their high CRI rating. This is quality light. Really, halogens do their best work lighting finished paintings. Use them at the secondary easel — for scrutinizing colour relationships and surface details like scumbling, the evenness of varnish and canvas tooth-quality. Halogens give finished paintings an otherworldly glow. Solux halogen is a producer of virtually perfect broad-spectrum light that mimics daylight and is used by the big art museums.

Lastly, full spectrum fluorescent tubes that have been sprayed with a tri-phosphor coating produce cool light with great colour indexing and with no glare or shadows. If you can skip the throwback to an institutional, blinking, buzzing, test-taking era and embrace its modern forms, you might just fall in love with the tube. 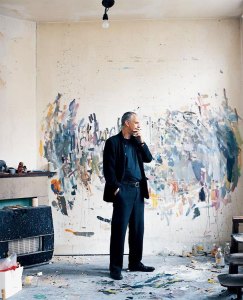 “Less is more.”
Luc Tuymans in his studio

PS: “The sky is the source of light in Nature and it governs everything.” (John Constable)

“Daylight is too easy. What I want is difficult: the atmosphere of lamps or moonlight.” (Edgar Degas)

Esoterica: I’ve worked in a variety of light modes: under a cloudless campground sky, under the forest canopy, under the weather, under the stairs, under the stars. I’ve worked under the clip-on task lamp at my father’s easel, in the cavernous cozy of his inter-lit space, with North-facing, floor-to-ceiling windows, hugged outside by encroaching cedars, the room burnished only by six bare, 60-watt, incandescent bulbs. Thousands of exceptional landscapes were painted there, and so I learned what’s most important about a light source. In 40 years, there was no need to change it. Remember, too, that what’s made in your studio has a future beyond your personal conditions. Wrap your eyes around your work with as much spectrum advantage as possible, knowing the painting can make its own magic in some as-yet unknown place. It could be under the sparkle of the Solux or a sunlit rotunda or something in between — perhaps perpendicular to someone’s North window, your halftones singing in the moonlight. “I have seized the light. I have arrested its flight.” (Louis Daguerre)