You are at:Home»Letters»Making photos work
By ShawnA May 30, 2017 Letters

Last weekend I attended an exhibition of the work of a wide range of painters. A lot of it was photo-derived — some of it really crackerjack — others not so hot. Why is it that some people can take photographic reference and make it exciting, while others only succeed in reproducing a photo? 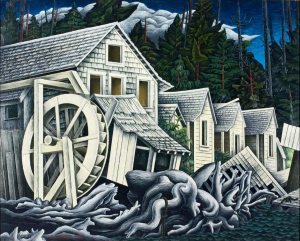 A lot of it has to do with the analysis that an artist gives to the reference prior to picking up the brush. Here are a few ideas you might find useful: When you’re looking at a photo that you think might be made into a painting, clarify in your mind what was the main area or interest in the photo that attracted you in the first place. Will this focus area make the transition into paint? Which areas are worth keeping and which are to be left out? Will other elements need to be added? How and where can more “spirit” be added to this reference material? How can the final work be made to sing? 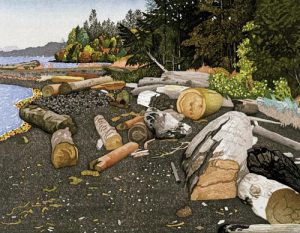 “The Seashore at Crofton”
1998 woodblock by E.J. Hughes

Now spend some time hunting down and making decisions about the innocent weaknesses in the photo that can lead to “photoism” in paintings. These may include lineups, convergence, homeomorphism, dead shadows, poor composition, detail overkill, amorphous and formless elements and problem areas in general. Sort out the elements that don’t look right and that will have to be re-designed. Also, don’t let yourself be distracted by colour. Local colour is often arbitrary and can be changed. In your mind’s eye, reduce your reference to black and white or some other narrow range. Now make a decision about an efficient order that you might work your way through. This requires sitting, looking and thinking. Focal areas — particularly difficult focal areas — ought frequently to be tackled first in order to give courage to the balance. On the other hand, an overall monochromatic lay-in goes a long way toward solving future problems. I believe in a holistic approach — here, there, everywhere, like a bee going to flowers. As well as the above, it’s a fresh and painterly look that shoots down the photo-paralysis, but that’s probably just a personal prejudice.

Photos, when processed through a creative mind, are the finest of servants. When they take control they can become miserable and demanding masters that are capable of ruining an otherwise joyous day. Have a good one. 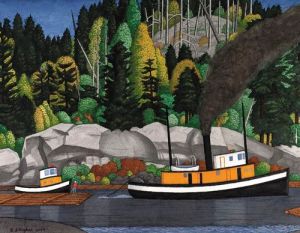 PS: “One way to get beyond the photo is to take a lot of photos of one subject. This helps you to see all the nuances as if you were painting from life.” (Theresa Bayer)

Esoterica: In the 19th century, painters like Corot and Courbet were both intrigued and intimidated by the artistry and truthfulness of the early photographs. It took the likes of the Impressionists to realize that painting had to make a turn and do something that photography couldn’t. E. J. Hughes said, “It is mostly due to the invention of the camera that all this design and emphasized paint quality have come into painting.” The camera is a brilliantly innocent device that inevitably forced modernism to happen.

This letter was originally published as “Making photos work” on June 3, 2005. 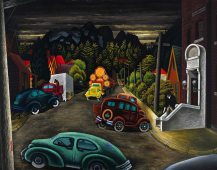 “The camera relieves us of the burden of memory. It surveys us like God, and it surveys for us. Yet no other god has been so cynical, for the camera records in order to forget.” (John Berger)