You are at:Home»Letters»Master class
By ShawnA October 7, 2016 Letters

Patterns jump out of glaciers and fill snow patches, as interlocking warm and cool greys zip through scree and shale. Light moves across a thicket of evergreens. The first time Dad and I went up the mountain, I came face to face with the origins of abstraction. Yoho National Park and its jewel, Lake O’Hara, are nestled in the western slope of the continental divide in southeastern British Columbia. At the end of our first day, Dad and I hammered a few more presentation nails into the log walls of cabin 3 and climbed into our beds for a friendly crit. “That one’s a little bit potato-like,” he tendered, eyeballing a blobby mass on one of my canvases. “We might eschew form altogether, or try to get things more or less right.” I stared at my potato, now blurry through a tear of acquiescence to the cliff of learning ahead. 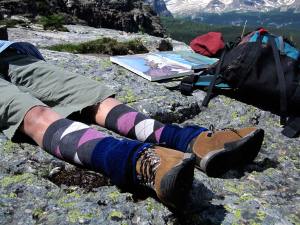 A few backpacksful of paintings later, my strokes had settled into a rebel’s tack. I memorized O’Hara’s entangled foregrounds of baby larches and blocky granite polka-dotted with lichen, backdropped by towering peaks and racing clouds. Brush energy — loose, fanned-in gradations of alpenglow — felt like a fair consolation for other blaring limitations. I fought for the accurate shapes and personalities of Yoho’s summits, working to harness the feeling of being there, humbled by the shadow I painted in. 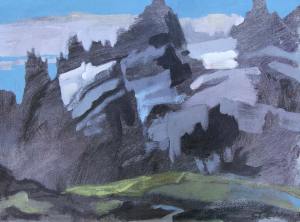 October larches radiated from green gold to amber, and O’Hara’s champagne air was crisp for trail-striding. The name “Yoho” comes from the Cree word expressing amazement, and our canvases were wild with it — mine striving for order and a clearer translation of my wonder. “Try to paint just one area neatly,” Dad nudged, but not particularly in my direction, while he pulled a pink-dipped number 5 bright across a shimmering foreground tarn. I sharpened the point of my sable with a wet thumb and fingertip. 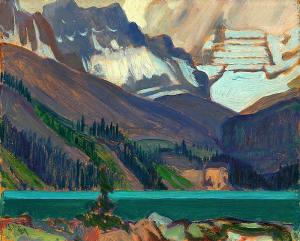 We stalked the locations of J.E.H. MacDonald, who painted Yoho for seven autumns between 1924 and 1930. At night in bed, I studied his oil sketches, which oozed efficiency of strokes and relayed every weather drama. I drooled at the scratchy scumbles of his hog hairs on wooden panels and the poetry in his shapes and greys. Almost 90 years later, Dad and I were grappling with the same event: the same hard rocks to sit on and the intermittent sleet dotting and washing out our sketches. We sipped tea and ate sandwiches in the company of MacDonald’s 90-year-old paint gobs, which remain wiped on the undersides of Yoho’s thousand-year-old boulders. The only things really changed here are the glaciers, receding, and the larches, defiant to the alpine freeze, a little taller than before. “For us, there is only the trying. The rest is not our business.” (T.S. Eliot) 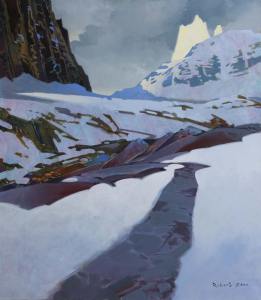 PS: “I had a little cabin, with cedar walls and floors, with mountains in the window, and spruces at the door.” (J.E.H. MacDonald, journal entry, 1927)

Esoterica: One day, we set up to paint in O’Hara’s nearby meadow with a video camera filming from a distance. When reviewing the footage, we noticed a difference in style: Dad was almost zen-like as he laid in zones, zoomed in on details, composed and embellished with a Yoda-like calm. By contrast, I — or rather my arm — wagged around like an out-of-control manufacturing robot, panic-stricken and grabbing at the mountain before it got away from me. I brushed off my embarrassment because I was safe with my teacher. Then he said, “I’ll take a page from your book. I’m too tight! Less constipation is in order.” “Let’s split the difference,” I gasped with epiphany, “I’m gonna calm down and tidy up.” “Look three times, think twice, paint once.” (Robert Genn) 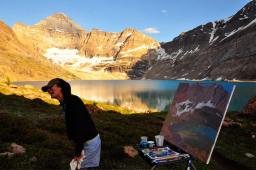 “Made a sketch later on the cabin verandah, but it was impossible to keep up with the changes. Oh the difficulties of mountain art for too little genius.” (J.E.H. MacDonald)