You are at:Home»Letters»Mastery
By ShawnA July 3, 2018 Letters

Why do some achieve mastery and others not? How is it that some “get good” and others never seem to? For many of us who teach or practice art — this is a question that we ask every day — about others and about ourselves. With all the interest in formal art education, workshops, self-promotion, sales, and other secondary art activities, there is, after all, no greater value than simply becoming a “master.” How does this happen? In my experience it largely occurs when the artist is alone. It’s a function of individual character. Leonardo da Vinci said, “One can have no smaller or greater mastery than mastery of oneself.” As well, mastery has an attitude. Robert Henri suggested, “Masters are people who haven’t learned everything — and they know it.” 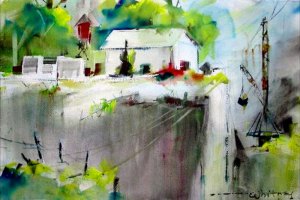 In George Leonard’s remarkable little book, Mastery, he draws on Zen philosophy and the martial art of aikido. He shows that the mastering of any non-trivial activity can be plotted on a graph where relatively small gains are made at intervals, followed by slight declines — and then by prolonged plateaus where nothing much seems to be happening. Those who become masters, he says, are the ones who learn to live with and accept these plateaus. Leonard also names three character types who seldom achieve mastery. They are the Dabbler, the Obsessive and the Hacker. 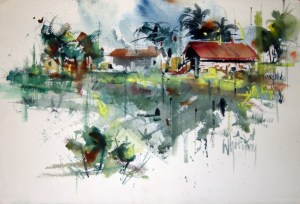 watercolour painting
by Edgar A. Whitney

The Dabbler, while initially enthusiastic, soon finds the plateaus unacceptable and is generally distracted to another sport. “The dabbler specializes in honeymoons,” says Leonard. The Obsessive, on the other hand, is a bottom-line kind of person. He is tenacious, inward-looking and much in need of fast results, but he, too, cannot handle the plateaus. The Obsessive stops short when his needs are not being met. The Hacker has a different attitude. He or she is willing to stay on a plateau indefinitely. He fails to continue to grow because he doesn’t want to. He’s just fine and comfortable, thank you.

True mastery involves a kind of driven skill-building. It may take an extraordinary life experience to make it happen. Maybe not. After stewing about it for a lifetime, I’m stewing about it right now — I know that mastery is a form of love transported to a surface. “When love and skill work together — expect a masterpiece.” (John Ruskin) 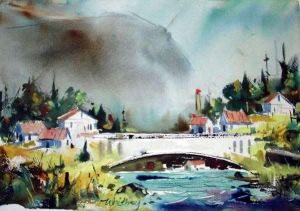 PS: “The discipline endured is the mastery achieved.” (Edgar A. Whitney)

Esoterica: In our current climate of instant gratification, simple involvement in a long-term graph is one way of understanding and building mastery. We all know of the joy that new peaks give — and the kind of silver star that we can give ourselves at those peaks. But there’s a kind of philosophic approach needed for the plateaus. Patience, work, care, process, love, and the confident knowledge that in due course the graph will once again wiggle upwards.

This letter was originally published as “Mastery” on June 15, 2004.

“The priceless quality of ease is present when one knows one knows.” (Edgar A. Whitney)