You are at:Home»Letters»Multi-stylist
By ShawnA June 12, 2018 Letters

Perhaps it’s the unsettling variety or the mind-bending sunshine. I’m at sixes and sevens and my stuff is all over the place. Maybe it’s just being away from the home studio. Maybe I’m coming up on another period. Last night, with the lazy fan turning and the wall-geckos chirping, I was dreaming of Corot. 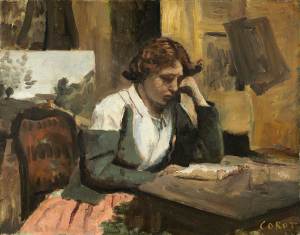 Jean Baptiste Camille Corot (1796-1875) was born in Paris. Early on he was a gentleman painter around Switzerland and Italy. One of the first plein air “pochade” painters, Corot’s early works showed “right on” values, fresh colour, and a sensitive treatment of light and form. He was what Kenneth Clark called “an optical painter with an innocent eye.” While keeping that eye to the French Salon and commercial success, he developed a parallel genre of classical and religious subjects. These he further combined into carefully composed landscapes that don’t seem to lean on his field-sketch experiences.

By the early 1850s, perhaps in an even more catering mode, he started exhibiting soft, woolly, poetic landscapes. Grey greens and fuzzy browns dominated casual or nonexistent drawing. These works were of course a roaring success which ensured a crowd of imitators. (Someone said that Corot painted 10,000 pictures, 15,000 of which were in the USA.) In his seventies, for a new challenge, he produced portrait and figure studies that were reminiscent of the young Manet, whom he admired. 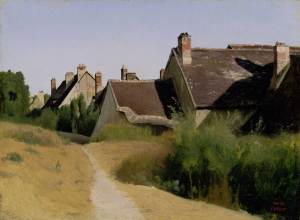 Corot was a nice guy. In order to give young and self-taught painters a chance to be part of the action, he lobbied to lower the hurdles that were then necessary for Salon entry. Thus began the Impressionists. Corot was straight-forward, entrepreneurial, unpretentious and generous. He supported the blind painter Daumier and provided a cottage for Millet’s widow. Corot wrote the book on creative giving and was one of the first whose work was a wiz-bang at fundraisers.

Artists of all stripes can find themselves mirrored in historical figures. I’d rather be Corot than Pollock. In the brotherhood and sisterhood, art history is both comfort and challenge. Have you ever tried to make a palm tree fuzzy? 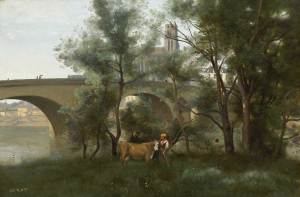 “Mantes, the banks of the Seine
at the foot of the bridge”
oil on canvas
by Jean-Baptiste-Camille Corot

PS: “In preparing a picture, it seems to me very important to begin by an indication of the darkest values — and to continue in order to the lightest value. From the darkest to the lightest I would establish twenty shades.” (Camille Corot) “He is still the strongest. He anticipated everything.” (Edgar Degas)

Esoterica: A Corot that I’ve always fancied is Diana Surprised at Her Bath. It’s in a private collection now but it’s often published. You can even buy a 72″ x 36″ hand-made oil reproduction of it for $299. It’s a sylvan scene — a pool under fuzzy trees — with, I think, five female bathers in various states of distress at the imminent arrival of a distant whoever. Diana, still in the pool, doesn’t seem to give a damn. It’s romantic, innocent, and in Corot’s mind, I’m sure it’s totally sincere. Okay, I’ll go somewhere and cool off.

This letter was originally published as “Multi-stylist” on March 15, 2005.

“Do console your poor friend, who is so troubled to see his paintings so miserable, so sad, next to the radiant nature he has before his eyes!” (Jean-Baptiste-Camille Corot) 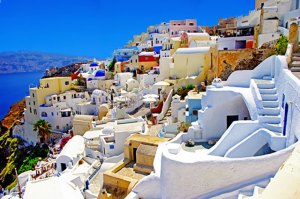 Join George Politis AWS, RI in a journey of creativity. Both islands are majestic, beautiful and quite hotels to stay, paint and also have as starting point to explore the islands. Painting in pure watercolor and mixed watermedia. Focusing in composition and experimenting. All levels are welcome. Every session starts with a demonstration and then we paint together. Maximum of 12 students. Price is all inclusive (hotels, three meals per day, transportation during the workshop and tuition).