A friend is building a sailboat in his studio. It’s a big one — the bowsprit protrudes ten feet into his yard. He’s been at it for thirty years — as long as I’ve known him. He’s also a highly productive artist — work is conceived, made, shipped out. The boat stays.

The boat is a work of art. From stem to stern there’s carving, inventive joinery, rare woods. I’m beginning to wonder whether the boat will ever be launched. During pauses in inspiration or while waiting for paint to dry its been both his sanctuary and his symbol. It’s the other woman. It’s knowing he may someday sail away. There’s always more to do.

While most of us may not have a project as ambitious or long-term as a sea-going yacht — it’s good to have more than one thing going at a time. Juggling stimulates. Rank lethargy doesn’t get a look in when you have a few plates in the air.

In my experience I’ve found that women are generally better at multi-tasking than men. Perhaps it has to do with a legacy of running homes and families, or maybe it’s in women’s nature. It’s certain that disappointment zones are more easily handled when there’s a creative distraction or a contrasting project.

Men, it has been noted, can be trained. Some do it intuitively. It’s the opposite of having a one track mind. Goal orientation can actually be enriched when several problems are tackled back to back. Other work is a relaxation that helps solve the problems and facilitate action in Job One. 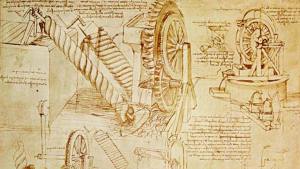 PS: Genn’s law: “Keep busy while you are waiting for something to happen.”

The following are selected correspondence relating to the above letter. If you find value in any of this please feel free to copy to a friend or fellow artist. We have no other motivation than to give creative people an opportunity to share ideas and possibly broaden their capabilities. Thank you for writing.

“In the Meantime” was the title of a painting I created while exploring various ideas… it sold quickly. I always work in at least two mediums at once; one helps the other and keeps me busy throughout the day. As a multi-media type I enjoy play and seriousness simultaneously. Yes, as a mother and artist I had to decompartmentalize.

Leonardo was spread pretty thin. The result was that he didn’t see things through to their conclusion. Most of his known paintings are unfinished. The great horse he tried to get off the ground never materialized. As his notebooks attest, most of his inventions were in the conception stages, and thus untested. He would be a candidate for the kind of artist you describe in your last clickback as content to leave concepts safely in the speculative imagination.

Every once in a while you mention a word or a phrase that stands out and makes me think. The last letter had “disappointment zones” in it. It made me uncomfortable if it’s what I think it is. What did you mean by that term?

(RG note) An artist can have periods where nothing seems to be going well. Work is either less than satisfactory or not proceeding. Ideas are hard to come by. Commissions fall through. Dealers fold. Persistent depressive or negative happenings can erode self-confidence and result in crummy work, which quickens the spiral. I have found it best to crawl into myself, take my own counsel and continue on with my greater purpose. The sunny days miraculously seem to return.

Anchors away
by Reginald Wright

I know several artists who are building boats. Do you think there is ever escape in mind?

(RG note) I think so. Self-motivated creativity can be an isolating, introspective activity which may make some artists feel lonely or trapped. Transportation of any sort on the side (cars, boats, planes) may symbolize the power to be off and away. I have seldom met artists who didn’t crave travel and movement for its own sake. For most of us it’s a tax deductable or depreciable means of achieving stimulation and gathering material.

Multi-tasking is the key to a productive life as well as a productive art career. I’ve found one inspiration builds on another, so the multi-tasking artist rarely gets “writer’s block”. As to why women come by the talent more easily than men, certainly, some of it may come from traditional roles. But there may be a physiological component. The corpus callosum, the membrane that separates the left and right hemispheres of the brain, is more permeable to signals crossing from one half to the other in women. Perhaps this leads to a greater ability to handle concurrently tasks normally associated with one side vs. the other.

I divide my time between my first career as an engineer and my second as an artist — actually “intermesh” is more accurate than “divide.” When a pompous attorney acquaintance once huffed to me “You can’t be an engineer and an artist,” I replied, “Why not? Leonardo da Vinci was.” For once in his life, he was speechless.

I have always had at least ten things on the go at once, primarily to aleviate boredom, but more importantly to stimulate those portions of my brain that I have always felt will disintegrate if I do not challenge them. I often find solutions to a task I am working on, while working on another!

It has been shown that ailing individuals recover much more quickly if they have a project to focus on.

It has also been shown in recent case studies, that females have a keener ability to store and solve many problems quickly, and with ease than do males. Why is this? Currently, researchers are saying that it has something to do with the organization and usage of the pre-frontal lobe of the brain which is involved in problem solving. Problem solving is one measure of an individual’s I.Q. But, at this point, no one has presented a theory as to why women are better skilled than men in the tasks which use this area.

Men have one track minds because Nature programmed them to. Women multi-task because they have to.

It’s in the name
by Alexandra Galanti, Vancouver, BC, Canada

My boyfriend calls me Planny Plannerton. Because I have so many things on the go!

I agree that other interests and projects/responsibilities are a good source of inspiration and are necessary to our growth as people and artists. However, it should not be taken to the extreme (for very long) in that it becomes overwhelming or distracting — juggling may be the ultimate temptation. (“I want it all and I want it now.”) Moderation is a beautiful thing when extremes (exist and) are the exception and not the rule.

In praise of juggling
by Corinne McIntyre, Maine, USA

Being a full time painter and now a small gallery owner, I find the business of art and the preparation of presentation to be another form of juggling. While I paint most every day I find the fun of all the other “stuff” that goes with it to be rewarding in its own way. No matter what you do in life you will always going to be juggling tasks… so you may as well enjoy them and let them feed into your major focus. For example, gardening to study forms and see the magic of nature; cooking to be aware of the senses and organization; meeting customers to enjoy the may kinds of people in the world and study their forms too; matting and framing to use the practical side of your nature and be surprised at what you can do; all the while these tasks are preparing you for your next painting and the next and next and next.

You may be interested to know that artists from 68 countries have visited these sites since March 30, 2000.

This includes an artist from Slovenia who read many of the clickbacks yesterday afternoon.