There’s an interesting paragraph in The Legacy of Mark Rothko, by Lee Seldes: “Rothko had nowhere to go. If he had been able to complicate his image rather than simplify it to the extreme, his art could have soared in new directions, but the image which had become his trademark was inescapable. As Sally Avery speculated, what if it had been possible for him to start again under an assumed name, as Japanese artists do when they have reached a plateau in their careers.”

There are probably more artists who have produced work under other names than we might think. I’ve often noticed that it’s our names that hold some of us up. Even though we arise every morning a new person, ready to explore new possibilities, we are victimized by some image or notion of ourselves we must continue to uphold.

Names can be a core problem in an artist’s working life. Are we secure beings of creative progress and advancement, or are we at times stuck in a style, which meets with our commercial acceptance or public persona? I’ve always hung out in the Picasso camp: Get known for changing directions, having periods, dispensing surprises. It’s honest, of course, but it’s also natural and empowering. If you’re in the game for a lifetime of growth and success, train your dealers to expect it from you. Your collectors will follow. 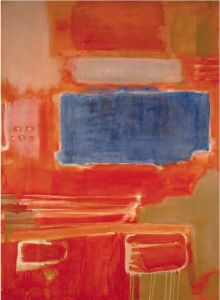 Esoterica: Multiple personality. One of the extreme examples was the Portuguese writer Fernando Pessoa (1888-1935). Over a fairly short creative career he produced 17000 works of poetry, fiction and non-fiction of considerable quality under four assumed names. Literary styles and attitudes matched the names of his alter-egos (which he called heteronyms) and perhaps accounted for his marvelous fecundity.

The following is selected correspondence relating to the above and other letters. Thank you for writing.

The call of customers
by Bonnie Staffel, Petoskey, Michigan, USA

Your message hit home in my career. I am a potter so try to analyze your message to fit what I do. Many times I can incorporate your thoughts into my life.

I am not a BIG name, but would entertain the thought that I am a big fish in a little pond. Have been hung up for a number of years in a mode of decorating the pots but on the side have explored other avenues of creativity in clay. It has been hard to let go of the commercial aspect of my income, as potters do not always enjoy a wealthy lifestyle. However, I can pay my bills. That is the crux of why I still do this. I am 78 years old, have been a professional potter for 52 years, and still working, as there is no other way in my scheme of things. My early career followed my creative urges and I sold everything I made. Now in the last quarter of my life, security rears its ugly head, and I succumb to the call of customers.

Rothko had already changed his name once. He was formerly Marcus Rothkowitz. His real problem was that he didn’t think much of his own work. The hollow realization that critics were going nuts over it and wealthy museums were paying big bucks for it helped steer him to drink, depression and suicide.

All my life I’ve been Joe Bland, painting ordinary quality landscapes. I should have been Porfirio Grandioso; swinging with women on every arm and having a wild and woolly style that changed regularly while the baffled customers and the knot-headed critics hung out in awe.

A friend of mine (who will remain nameless) was doing so-so in her career. (She is shy and does not have one person shows.) A couple of years ago, with the collusion of her dealers, she made a small stylistic change and started signing her paintings with a man’s name. Her sales have picked up. What do you think of this?

(RG note) It has to be admitted that chauvinism and sex-based perceived values still exists in the art marketplace. But it’s a lot less than just a few years ago and certainly a lot less than in other generations. I’d like to think it’s getting to be a more level playing field and this sort of thing won’t happen much longer. One ought to be encouraged by the current high percentage of successful women artists. I like Charlotte Whitton’s remark:

“Whatever women do, they must do twice as well as men to be thought half as good. Luckily, it’s not difficult.”

By and large, signing with another name of either sex prevents the dealer from giving truthful anecdotal material and biographical information about the work’s creator. This, it seems to me, is the vital flaw in phony naming.

One of the situations that I’ve noticed in my life as a painter is those few great periods that I’ve had, where everything went well with my ideas and my productivity for a few months or a year. Money rolled in. I thought it would never end. But it did. It bothers me to think that the only stuff that will be associated with my name will be a few colorful abstracts that I did in the ‘70s.

“There is a tide in the affairs of men, but the floods are short, so take them.”

What about using a pseudonym while I’m in the training stage, while I’m learning to paint, and not signing my real name until I get to where I think my work is half decent?

My watercolors are altogether different than my oils. They are of different subjects and the style is very different too. Do you think it might be a good idea to issue them under the names of two different artists? I have often thought about this but up till now I haven’t been able to do anything about it.

(RG note) How will these two different artists get along? Will they mind having separate bank accounts? What if one gets jealous of the other?

I decided to keep my maiden name when I was married almost 20 years ago. I had started painting with it; it was unusual, and it was, after all, MY name. At one time, I had toyed with the idea of taking my mom’s name, Woodman… an ideal name for a nature painter. But something stuck with “Lalingo”… I have learned that it means “language” or “the tongue” in Italian; an expressive idea for what my work is all about. I am trying to communicate the deeper meaning and mystery of nature through my painting, and the idea has become as important to me as the actual images. My dad was a gifted musician who prided himself on his individuality and his talent. When he died suddenly just 2 months ago, it struck me that his greatest gift to me was the example that it was okay to be different; that genuine character is truth and integrity. It is an honour to my father to sign my work with his name.

Enjoyed your newsletter about names today. This is precisely why I write under three different monikers — to accommodate three different styles — however, I do find that Mrs. Generic still covers it best -:)).

My mind is always exploring different roads. I work in watercolor and sometimes mixed media. In order to show consistency I started to work in series which paid off and I started selling. However, to explain the different looks in my booth I decided to update my artist statement and coin a phrase that “Painting, for me, is creative exploration.”

More than one occupation
by Rita Monaco, Vancouver, BC, Canada

I have always had a problem with galleries and public’s expectations that a painter will produce recognizable work. By this I mean recognizable at the art-lover level, usually a subject, not a style. Art is becoming commodity and galleries cater to buyer taste. This should not influence the artist to the point of stifling the creative process, but many times it does. I know painters that are stuck on a subject because that is the one that sells and they are struggling every day to produce variations of it. I think that this is sad and the public will soon tire of a particular subject and turn his attention to a new subject, a new fad. In the meantime the artists will be stuck with a subject that nobody wants (remember the flowers?) and it will take time, sometimes a long time or never again, to come up a new subject that the public will like… I think that being an artist also means exploring, expanding, discovering new subjects, new ideas, new meanings. It is very difficult to resist the lure of the bucks… but becoming a producer of fashionable images should not be the only occupation of an artist.

I’m standing in the Gagosian Gallery in Chelsea where they’re having an Anselm Keiffer exhibit. He’s the guy who glues hay and sand onto huge canvases and makes landscapes out of them. There are two canvases. They face each other in the big warehousey space. It’s all hushy and whispery in here. With the girl behind the desk is the review in the New York Times: Anselm Keiffer at Gagosian Gallery; “Anselm Keiffer has produced a couple of good Anselm Keiffers.”

(RG note) Some writers asked, “Who is this Rumi? There are at least two books that I know of called The Essential Rumi, and others that are available and popular that will explain the philosophy.