You are at:Home»Letters»A new tube
By clearmarble July 4, 2014 Letters
Dear Artist, Due to a serendipitous detour en route to New York, I’m laptopping you from the Anaheim Convention Center in Southern California. Twenty thousand teenagers — mostly girls clutching their pass and iphone — congregate for a chance to meet, interact and take a selfie with their latest online video blogging hero. VidCon is the world’s largest gathering of YouTubers — people who make independent videos and post them on their own channel, attracting millions of followers and fans. 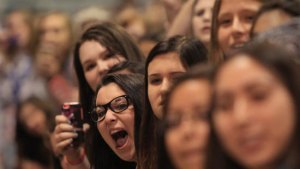 According to YouTube analytics compiler SocialBlade, the range of estimated revenues earned by YouTube content creators is based on daily views multiplied by a low cost-per-thousand-impression advertising rate (between sixty cents and five dollars, depending on the type of ad). Even after Google takes a 45% cut, profits are notable: millions per year for the top creators, mostly youngsters uploading from their bedrooms. They show video gaming techniques with amusing “walk-throughs” and “gaming moments,” perform comedy skits, enact pranks on their little sisters, test cosmetics, or they merely unwrap and play with toys. What does it all mean? It’s enough to make a pterodactyl crash a Ford Capri into a Betamax while playing Twister with a dodo. Here on the convention floor, a sea of ponytails swells and descends upon multiple booths: inflatable, bouncy recreation booth, selfie booth, pose-with-a-purple-Kia booth, make-up booth, make-your-own-merch booth, colouring booth, dance-off booth. Everything’s on camera. An interview booth is set up with a mod sofa, lights and mics. A nearby horde lets out a British Invasionesque squeal. Someone faints. A pale-faced hoodie-kid flanked by six beefy black-shirted bodyguards cuts through the throng and, cluster by cluster, poses for an aerial selfie-moment with each dewy fan. The personal connections are palpable. The revolution is imminent. “It’s PewDiePie!” a pair of braces gasps through her Cold Stone Creamery parfait. PewDiePie, aka Felix Arvid Ulf Kjelberg is the world’s top YouTuber — a Swedish video-gaming wunderkind with 28 million subscribers. Another group-squeal burns through the convention hall like a passing rollercoaster. Later, Smosh, WillyRex, Captain Sparklez, Gigigorgeous and Cutepolish will answer your questions upstairs in the conference room. 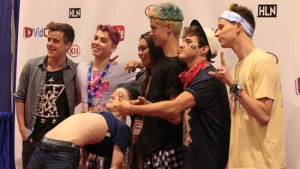 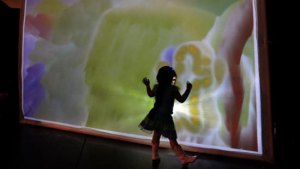 Esoterica: Even the ancient Egyptians understood portraiture as a means of describing not just physical features, but wealth, status and personality.Anthony Van Dyck, Hans Holbein, Diego Velazquez, Rembrandt, John Singer Sargent, and Andy Warhol functioned as the societal mirror of their times. “Our media works us over completely,” wrote Marshall McLuhan in 1964, in Understanding Media: The Extensions of Man “With the arrival of electric technology, man has extended, or set outside himself, a live model of the central nervous system itself.”   [fbcomments url=”http://clicks.robertgenn.com/new-tube.php”]   Featured Workshop: Susan Blackwood and Howard Friedland