You are at:Home»Letters»The art shrine
By clearmarble December 9, 2014 Letters
Dear Artist, An anonymous email came in from a subscriber: “The Painter’s Keys is not a website — it’s a vision. It’s a vision of a universal brotherhood and sisterhood, timeless and for all time. It’s a vision of solitary strugglers who are united in the obligation for quality while serving their own individualist dreams. What we artists do is noble and life-enhancing for others. It requires a balance between outward learning and inward contemplation. Thank you for providing this shrine.” 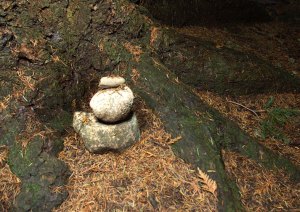 Rocks mark the way and establish a sense of presence and destination. Obos can be of tiny pebbles or of great boulders, as in the Inuit Inukshuks.

I often think of these words. I’m deeply proud that many get the point. Our website is certainly one manifestation of that shrine, and while it is not a physical spot or a spiritual dogma, it might be a metaphor. Years ago, I started placing small “obos” in remote places. An obos is a Japanese term for a pile of rocks, often only three, one on top of another. The obos merely says, “I was here.” Being an unusual configuration, it is obviously from the hand of man. Further, if it is knocked down or desecrated, it is easily rebuilt. There can be one at the bottom of the garden or in a private corner of a public park. I’ve seen obos among potted bonsai in a sparse apartment high above Park Avenue’s clatter. 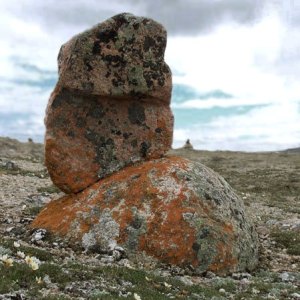 Inuksutuqaaluk – an ancient inuksuk at Mingo Lake in southwest Baffin Island, Canada’s Nunavut territory. Estimated to be about 3,000 years old. The Canadian Encyclopedia

On one of our west coast islands, I built a few obos on a rocky foreshore just above the tide. Returning twenty years later, I found them still intact and dressed in moss, as if spirited there by some ancient coastal cult. Obos is a destination, a sanctuary, a shrine and a focal point that reminds us we work with our hands. We are builders and what we build is sacred. Obos may appear inconsequential and be unnoticed by casual passersby. It’s a private tribute to something higher, something we might be striving for but find difficult to attain. Approach obos with a relaxed, curious mind. Questions not consciously asked may be answered. Obos gives pause, a contemplative thought or a new direction, a respite from clutter, a rededication to our struggle and an affirmation of the value of our personal effort. Obos is the carrier of a golden secret. Obos is like art itself. Obos is a joy to build. 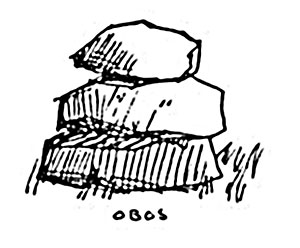 For artists and other sensitive people obos can serve as gentle reminders of the private and noble act of creation.

Best regards, Robert PS: “I slept and dreamt that life was joy. I awoke and saw that life was service. I acted and behold, service was joy.” (Rabindranath Tagore) Esoterica: Many artists have also written of the creative rejuvenation to be had in simple walks. Whatever the mechanics of this phenomenon, there is no question that it works. Early on I wondered just how many of these mini-sabbaticals my spinning mind could take in any given day. I contrived how my recycling might be quickened. I required a destination that was worthy of many visits. According to current statistics, we now need fewer friends — an indictment of our society based on TV and the celebrities we think we know. The Internet also offers the busy keys of friendship and the understanding that we are not alone. But down to the bottom of the garden is also a good place to go. Down and back from our shrine. This letter was originally published as “The art shrine” on November 14, 2006.